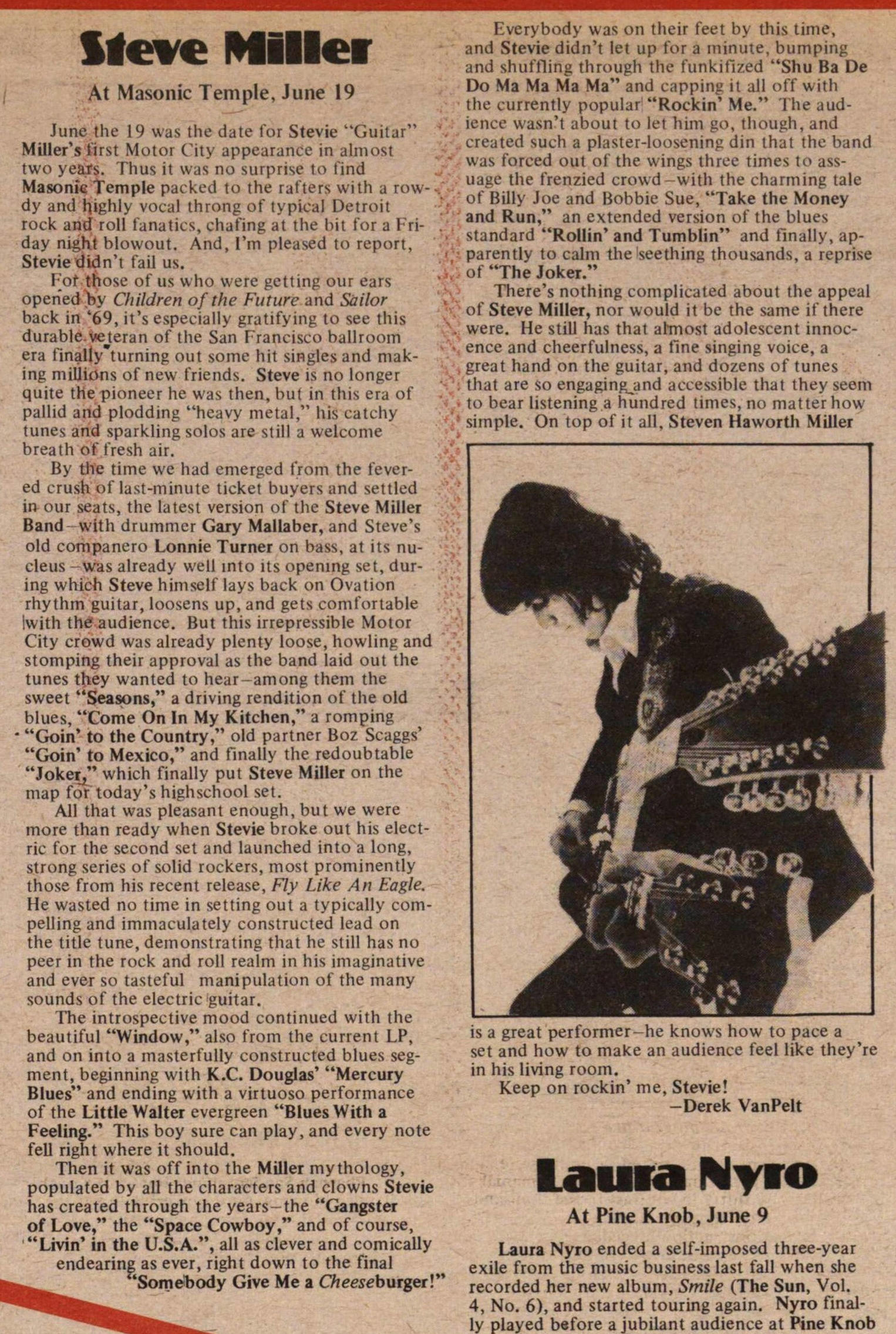 June the 19 was the date lor Stevie "Guitjr" Miller's l'irst Motor City appcarancc in almost two yeaïs. Thus it was no surprise to find Masonic Temple packed to the rafters with a ,' dy and highly vocal throng of typical Detroit rock and roll fanatics, chafing at the bit for a l'riday nighl blowout. And, l'm pleased to report, Stevie didn't l'ail us. Fot those of us who were getting our ears operiedy Cliildren of the Future and Sáilor back in '69, it's especially gratifying to see this durable, vejeran of the San Francisco ballroom era finaliy turning out some hit singles and making miUions of new friends. Steve is no longer quite tHe pioneer he was then, but in this era of pallid and plodding "heavy metal," lus catchy tunes and sparkling solos are still a welcome breath of fresh air. By the time we had emerged from the fevered crush of last-minute ticket buyers and settled in our seats, the latest version of the Steve Miller Band with drummer Gaiy Mallaber, and Steve's oíd compañero Lonnie Turner on bass, at its nucleus -was already well into its opening set, during which Steve himself lays back on Ovation rhythm guitar, loosens up, and gets comfortable Iwith the audience. But this irrepressible Molor City crewd was already plenty loose, howling and stomping their approval as the band laid out the tunes they wanted to hear-among them the sweet "Seasons," a driving rendition of the old blues, "Come On In My Kitchen," a romping " "Goin' to the Country," old partner Boz Scaggs' "Goin' to Mexico," and finaliy the redoubtable "Jokeij" which finaliy put Steve Miller on the map for today's highschool set. All that was pleasant enough, but we were more than ready when Stevie broke out nis electric for the second set and launched into a long, strong series of solid rockers, most prominently those from his recent release, Fly Like An Eagle. He wasted no time in setting out a typically compelling and immaculately constructed lead on the title tune, demonstrating that he still has no peer in the rock and roll realm in his imaginative and ever so tasteful manipulation of the many sounds of the electric guitar. The introspective mood continued with the beautiful "Window," also from the current LP, and on into a masterfully constructed blues segment, beginning with K.C. Douglas' "Mercury Blues" and ending with a virtuoso performance of the Little Walter evergreen "Blues With a Feeling." This boy sure can play , and every note feil right where it should. Then it was off into the Miller mythology, populated by all the characters and clowns Stevie has created through the years-the "Gangster of Love," the "Space Cowboy," and of course, "Livin in the U.S.A.", all as clever and comically endearing as ever, right down to the final Somebody Give Me a Cheeseburger!" Everybody was on their feet by this time, and Stevie didn't let up tor a minute, bumping and shüfflifig through the funkifized "Shu Ba De Do Ma Ma Ma Ma" and capping it all off with the currently popular "Rockin' Me." The audience wasn't about to lei lüm go, though, and ereated such a plaster-loosening din Ihat the band was forced out of the wings three times to assuage the frenzied crowd with the charming tale of Billy Joe and Bobbie Sue, "Take the Money and Run," an extended versión of the blues standard "Rollin' and Tumblin" and finally, apparently to calm the seething thousands, a reprise of "The Joker." There's nothing complicated about the appeal of Steve Miller, nor would it be the same il' ihere were. He still has that ahnost adolescent innocence and cheerfulness, a fine singing voice, a great hand on the guitar, and dozens of tunes : that are so engagingjind accessible that they seem to bear listening a hundred times, no matter how simple. On top of it all. Steven Hawortli Miller is a great performer-he knows how to pace a set and how to make an audience feel like they're in his living room. Keep on rockin' me. Stevie!