"the Man Who Fell To Earth" 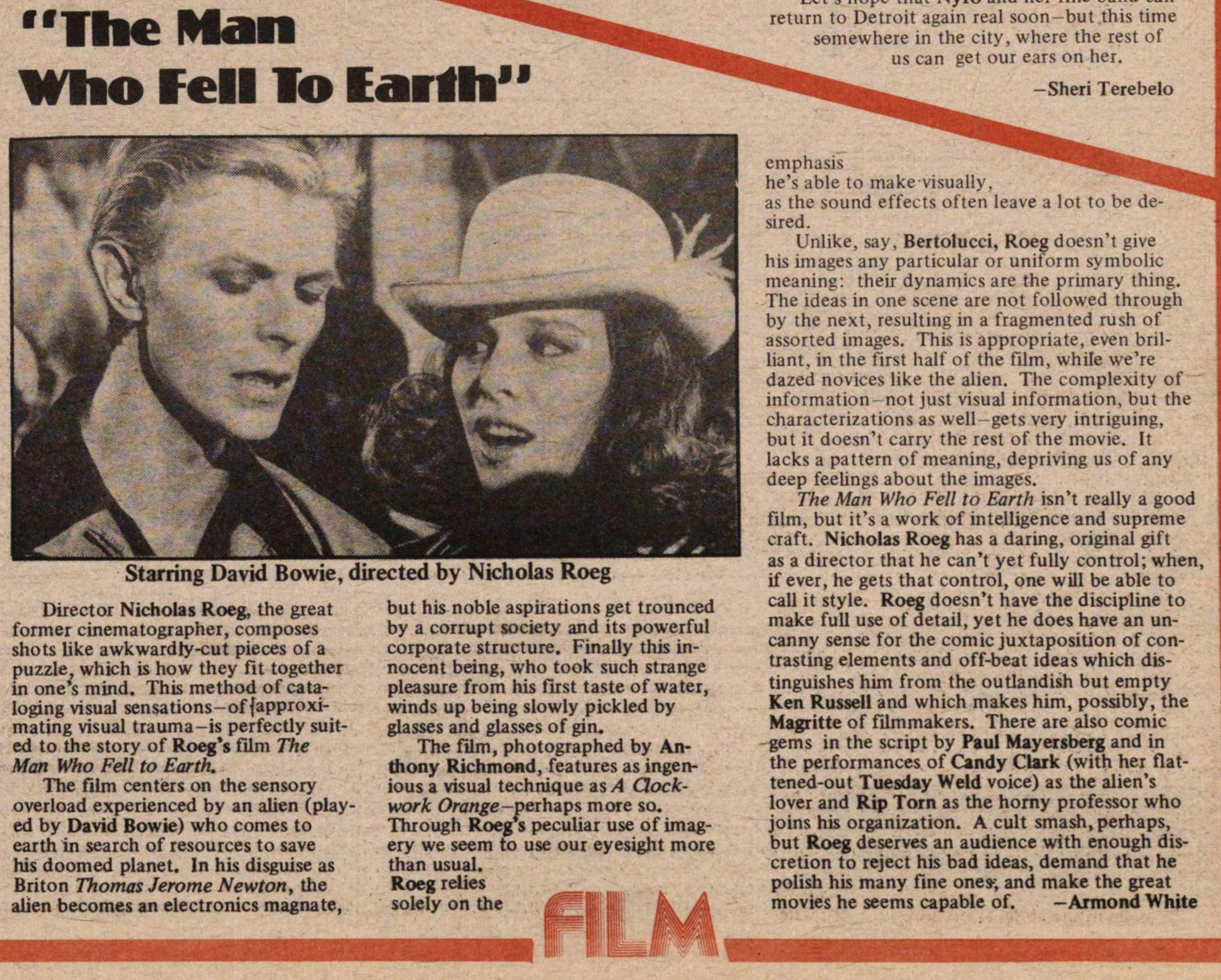 The Man Who Fell To Earth

Director Nicholas Roeg, the great former cinematographer, composes shots like awkwardly-cut pieces of a puzzle which is how they fit together in one's mind. This method of cataloging visual sensations- of approximating visual trauma -is perfectly suited to the story of Roeg's film The Man Who Fell to Earth.

The film centers on the sensory overload experienced by an alien (played by David Bowie) who comes to earth in search of resources to save his doomed planet. In his disguise as Briton Thomas Jerome Newton, the alien becomes an electronics magnate, but his noble aspirations get trounced by a corrupt society and its powerful corpora te structure. Finally this innocent being, who took such strange pleasure from his first taste of water, winds up being slowly pickled by glasses and glasses of gin.

The film, photographed by Anthony Richmond, features as ingenious a visual technique as A clockwork Orange- perhaps more so. Through Roeg's peculiar use of imagery we seem to use our eyesight more than usual. Roeg relies solely on the emphasis _ he's able to make visually, ( as the sound effects often leave a lot to be desired.

Unlike, say, Bertolucci, Roeg doesn't give his images any particular or uniform symbolic meaning: their dynamics are the primary thing. The ideas in one scene are not followed through by the next, resulting in a fragmented rush of assorted images. This is appropriate, even brilliant. in the first half of the film, while we're dazed novices like the alien. The complexity of information not just visual information, but the characterizations as well-gets very intriguing, but it doesn't carry the rest of the movie. It lacks a pattern of meaning, depriving us of any deep feelings about the images.

The Man Who Fell to Earth isn't really a good film, but it's a work of intelligence and supreme ciaft. Nicholas Roeg has a daring, original gift as a director that he can't yet fully control; when, if ever, he gets that control, one will be able to call it style. Roeg doesn't have the discipline to make full use of detail, yet he does have an uncanny sense for the comic juxtaposition of contrasting elements and off-beat ideas which distinguishes hun from the outlandish but empty Ken Russell and which makes him, possibly, the Magritte of filmmakers.