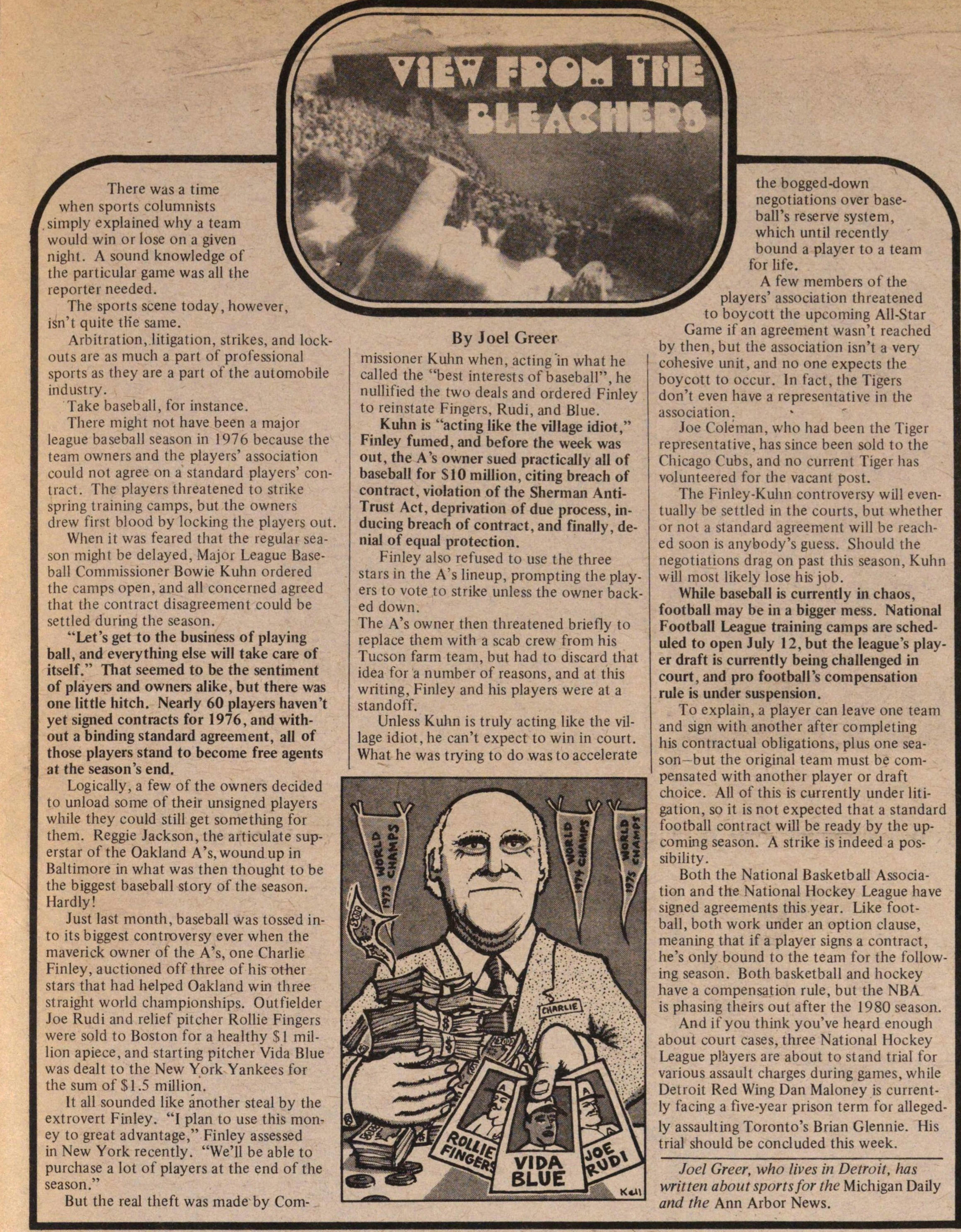 There was a time when sports columnists simply explained why a team  would win or lose on a given night. A sound knowledge of the particular game was all the reporter needed.

The sports scene today, however, isn't quite the same.

Arbitration, litigation, strikes, and lockouts are as much a part of professional sports as they are a part of the automobile industry.

There might not have been a major league baseball season in 1976 because the team owners and the players' association could not agree on a standard players' contract. The players threatened to strike spring training camps, but the owners drew first blood by locking the players out.

When it was feared that the regular season might be delayed, Major League Baseball Commissioner Bowie Kuhn ordered the camps open, and all concerned agreed that the contract disagreement could be settled during the season.

"Let's get to the business of playing ball, and everything else will take care of itself." That seemed to be the sentiment of players and owners alike, but there was one little hitch. Nearly 60 players haven 't yet signed contracts for 1976 , and without a binding standard agreement, all of those players stand to become free agents at the season's end.

Logically, a few of the owners decided to unload some of their unsigned players while they could still get something for them. Reggie Jackson, the articulate superstar of the Oakland A's, woundup in Baltimore in what was then thought to be the biggest baseball story of the season. Hardly!

Just last month, baseball was tossed into its biggest controversy ever when the maverick owner of the A's, one Charlie Finley, auctioned off three of his other stars that had helped Oakland win three straight world championships. Outfielder Joe Rudi and relief pitcher Rollie Fingers were sold to Boston for a healthy $1 million apiece, and starting pitcher Vida Blue was dealt to the New York Yankees for the sum of $ 1 .5 million.

lt all sounded like another steal by the extrovert Finley. "I plan to use this money to great advantage," Finley assessed in New York recently. "We'll be able to purchase a lot of players at the end of the season."

But the real theft was made by missioner Kuhn when, acting in what he called the "best interests of baseball", he nullified the two deals and ordered Finley to reinstate Fingers, Rudi, and Blue.

Kuhn is "acting like the village idiot," Finley fumed, and before the week was out, the A's owner sued practically all of baseball for $10 million, citing breach of contract, violation of the Sherman AntiTrust Act, deprivation of due process, inducing breach of contract, and finally, denial of equal protection.

Finley also refused to use the three stars in the A's lineup, prompting the players to vote to strike unless the owner backed down.

The A's owner then threatened briefly to replace them with a scab crew from his Tucson farm team, but had to discard that idea for a number of reasons, and at this writing, Finley and his players were at a standoff.

Unless Kuhn is truly acting like the village idiot, he can't expect to win in court. What he was trying to do was to accelerate the bogged-down negotiations over baseball's reserve system, which until recently bound a player to a team for life.

A few members of the players association threatened to boycott the upcoming All-Star Game if an agreement wasn't  reached by then, but the association isn't a very cohesive unit, and no one expects the boycott to occur. In fact, the Tigers don't even have a representative in the association.

Joe Coleman, who had been the Tiger representative, has since been sold to the Chicago Cubs, and no current Tiger has volunteered for the vacant post.

The Finley-Kuhn controversy will eventually be settled in the courts, but whether or not a standard agreement will be reached soon is anybody's guess. Should the negotiations drag on past this season, Kuhn will most likely lose his job.

While baseball is currently in chaos, football may be in a bigger mess. National Football League training camps are scheduled to open July 12, but the league 's player draft is currently being challenged in court, and pro football's compensation rule is under suspension.

To explain, a player can leave one team and sign with another after completing his contractual obligations, plus one season-but the original team must be compensated with another player or draft choice. All of this is currently under litigation, so it is not expected that a standard football contract will be ready by the upcoming season. A strike is indeed a possibility.

Both the National Basketball Association and the National Hockey League have signed agreements this year. Like football, both work under an option clause, meaning that if a player signs a contract, he's only bound to the team for the following season. Both basketball and hockey have a compensation rule, but the NBA is phasing theirs out after the 1980 season.

And if you think you've heard enough about court cases, three National Hockey League players are about to stand trial for various assault charges during games, while Detroit Red Wing Dan Maloney is currently facing a five-year prison term for allegedly assaulting Toronto's Brian Glennie. His trial should be concluded this week.