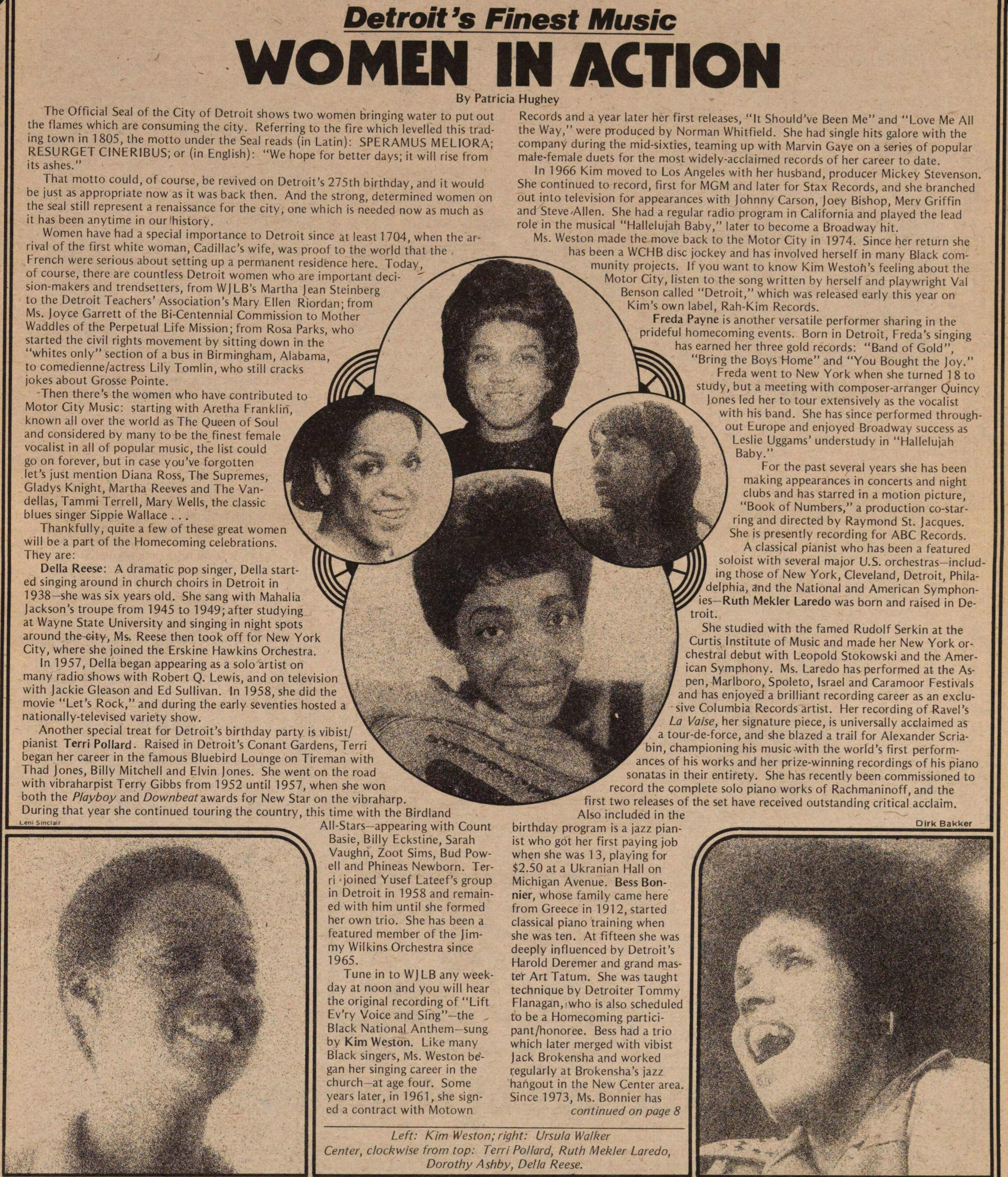 The Official Seal of the City of Detroit shows two women bringing water to put out the flames which are consuming the city. Referring to the fire which leveled this trading town in 1805, the motto under the Seal reads (in Latin): SPERAMUS MELIORA; RESURGET CINERIBUS; or (in English): "We hope for better days; it will rise from its ashes."

That motto could, of course, be revived on Detroit's 275th birthday, and it would be just as appropriate now as it was back then. And the strong, determined women on the seal still represent a renaissance for the city, one which is needed now as much as t has been anytime in our history.

Women have had a special importance to Detroit since at least 1704, when the rival of the first white woman, Cadillac's wife, was proof to the world that the French were serious about setting up a permanent residence here. Today, of course, there are countless Detroit women who are important decision-makers and trendsetters, from WjLB's Martha lean Steinberg to the Detroit Teachers' Association's Mary Ellen Riordan; from Ms. Joyce Garrett of the Bi-Centennial Commission to Mother Waddles of the Perpetual Life Mission; from Rosa Parks, who started the civil rights movement by sitting down in the "whites only" section of a bus in Birmingham, Alabama, to comedienne/actress Lily Tomlin, who still cracks jokes about Grosse Pointe.

Then there's the women who have contributed to Motor City Music: starting with Aretha Franklin, known all over the world as The Queen of Soul and considered by many to be the finest female vocalist in all of popular music, the list could go on forever, but in case you've forgotten let's just mention Diana Ross, The Supremes, Gladys Knight, Martha Reeves and The Vandellas, Tammi Terrell, Mary Wells, the classic blues singer Sippie Wallace . . .

Thankfully, quite a few of these great women will be a part of the Homecoming celebrations. They are:

Della Reese: A dramatic pop singer, Della started singing around in church choirs in Detroit in 1938 - she was six years old. She sang with Mahalia Jackson's troupe from 1945 to 1949; after studying at Wayne State University and singing in night spots around the city, Ms, Reese then took off for New York City, where she joined the Erskine Hawkins Orchestra.

In 1957, Della began appearing as a solo artist on many radio shows with Robert Q. Lewis, and on television with Jackie Gleason and Ed Sullivan. In 1958, she did the movie "Let's Rock," and during the early seventies hosted a nationally-televised variety show.

Another special treat for Detroit's birthday party is vibist /pianist Terri Pollard. Raised in Detroit's Conant Gardens, Terri began her career n the famous Bluebird Lounge on Tireman with Thad Jones, Billy Mitchell and Elvin Jones. She went on the road with vibraharpist Terry Gibbs from 1952 until 1957, when she won both the Playboy and Downbeat awards for New Star on the vibraharp. During that year she continued touring the country, this time with the Birdland All-Stars- appearing with Count Basie, Billy Eckstine, Sarah Vaughn, Zoot Sims, Bud Powell and Phineas Newborn. Terri -joined Yusef Lateef's group n Detroit n 1958 and remained with him until she formed her own trio. She has been a featured member of the Jimmy Wilkins Orchestra since 1965.

Tune in to WJ LB any weekday at noon and you will hear the original recording of "Lift Ev'ry Voice and Sing" - the Black National Anthem - sung by Kim Weston. Like many Black singers, Ms. Weston began her singing career in the church - at age four. Some years later, n 1961, she signed a contract with Motown Records and a year later her first releases, "It Should've Been Me" and "Love Me All the Way," were produced by Norman Whitfield. She had single hits galore with the company during the mid-sixties, teaming up with Marvin Gaye on a series of popular male-female duets for the most widely-acclaimed records of her career to date.

In 1966 Kim moved to Los Angeles with her husband, producer Mickey Stevenson. She continued to record, first for MGM and later for Stax Records, and she branched out inlo television for appearances with Johnny Carson, Joey Bishop, Merv Griffin and Steve -Alien. She had a regular radio program in California and played the lead role in the musical "Hallelujah Baby," later to become a Broadway hit.

Ms. Weston made the move back to the Motor City in 1974. Since her return she has been a WCHB disc jockey and has involved herself in many Black community projects. If you want to know Kim Weston's feeling about the Motor City, listen to the song written by herself and playwright Val Benson called "Detroit," which was released early this year on Kim's own label, Rah-Kim Records.

Freda Payne s another versatile performer sharing in the prideful homecoming events. Born in Detroit, Freda's singing has earned her three gold records: "Band of Gold", "Bring the Boys Home" and "You Bought the Joy."

Freda went to New York when she turned 18 to study, but a meeting with composer-arranger Quincy )ones led her to tour extensively as the vocalist with his band. She has since performed throughout Europe and enjoyed Broadway success as Leslie Uggams' understudy n "Halleluiah Baby."

For the past several years she has been making appearances in concerts and night clubs and has starred in a motion picture, "Book of Numbers," a production co-starring and directed by Raymond St. Jacques. She s presently recording for ABC Records.

A classical pianist who has been a featured soloist with several major U.S. orchestras - including those of New York, Cleveland, Detroit, Philadelphia, and the National and American Symphonies - Ruth Mekler Laredo was born and raised in Detroit.

She studied with the famed Rudolf Serkin at the Curtís Institute of Music and made her New York orchestral debut with Leopold Stokowski and the American Symphony. Ms. Laredo has performed at the Aspen, Marlboro, Spoleto, Israel and Caramoor Festivals and has enjoyed a brilliant recording career as an exclusive Columbia Records artist. Her recording of Ravel's La Vaise, her signature piece, is universally acclaimed as a tour-de-torce, and she blazed a trail tor Alexander Scriabin, championing his music with the world's first performances of his works and her prize-winning recordings of his piano sonatas in their entirety. She has recently been commissioned to record the complete solo piano works of Rachmaninoff, and the first two releases of the set have received outstanding critical acclaim.

Also included in the birthday program is a jazz pianist who got her first paying job when she was 13, playing for $2.50 at a Ukrainian Hall on Michigan Avenue. Bess Bonnier, whose family came here from Greece in 1912, started classical piano training when she was ten. At fifteen she was deeply influenced by Detroit's Harold Deremer and grand master Art Tatum. She was taught technique by Detroiter Tommy Flanagan,who is also scheduled to be a Homecoming participant/honoree. Bess had a trio which later merged with vibist Jack Brokensha and worked regularly at Brokensha's jazz hangout in the New Center area. Since 1973, Ms. Bonnier has

The harp you hear on many major television and radio commercials may belong to another of Detroit's musical off-spring: Dorothy Ashby is the country's most accomplished exponent of contemporary music on the harp, and she's home from Santa Monica for the big birthday celebration. She was the first harpist to be chosen for awards n the Downbeat and Playboy Jazz Polls, and several of her 12 albums have received four-star reviews in Billboard and Downbeat magazines.

Of course Detroit's rich gospel background must be represented, and Tessie Hill is the ideal person to do it. Mahalia Jackson once described her own singing as "making a joyful sound unto the Lord," and Tessie's singing could be described in the same way. "Joyful sounds" flow as Ms. Hill sings the gospel, shaking her head back and forth as though each verse has revealed to her a new truth, strutting, swaying, and crying out with joy.

Although she was born in Georgia, Tessie was raised in Detroit. She began singing professionally in 1964 and has introduced many gospel songs to a national audience; her current hit, "Great Things," is a favorite of thousands of Detroiters. She has appeared on television, sung in Ford Auditorium, Cobo Hall and Music Hall here and the Keil Auditorium in St. Louis; she has also performed in Chicago, New York, and Kansas City, and currently records for ABC Records in Los Angeles.

Tessie Hill is a member of Detroit's Church of God In Christ.

Ursula Walker won a special award tor her singing talent n a Detroit News talent contest at the age of 12. She has been singing in the Detroit area since 1952 - her first television appearance was on the "Auntie Dee Show" that year - and she began singing professionally with Jack Brokensha at Baker's Keyboard Lounge in 1962. Ursula, a mother of four, attended Blessed Sacrament and Saint Leo's schools n Detroit. For the past five summers, Ursula has been singing with the Brookside Jazz Ensemble on the Terrace at the Pontchartrain (P-Jazz).

Although she was raised in New Rochelle, N.Y., Marlena Shaw is well-known in the Motor City and will join Detroit's fantastic artists in the city's huge cultural affair. Marlena got her first professional break at Harlem's renowned Apollo Theatre at age ten, which led to several appearances on the "Spotlight on Harlem" television show. She traveled with her trumpeter uncle, Jimmy Burgess, until her grandmother put an end to it, confining her performances to her Baptist church choir and local talent shows in New Rochelle.

In 1965, Marlena began playing dates in nightclubs along the East Coast. Shortly afterwards, she recorded "Wade In The Water," which bought Marlena heavy attention from the general public. Count Basie hired her without an audition, and Marlena toured with Basie's band to standing-room-only audiences in this country and in Europe.

Marlena has since recorded three albums as a solo artist for Blue Note Records: "Marlena," "From the Depths of My Soul," and her latest, "Who Is This Bitch, Anyway?"

You will undoubtedly see and hear any number of additional women artists performing at the Homecoming Festival; this brief survey is meant only as an introduction to the great wealth of talent and brilliance Motor City women have produced. Keep your eyes and ears open !