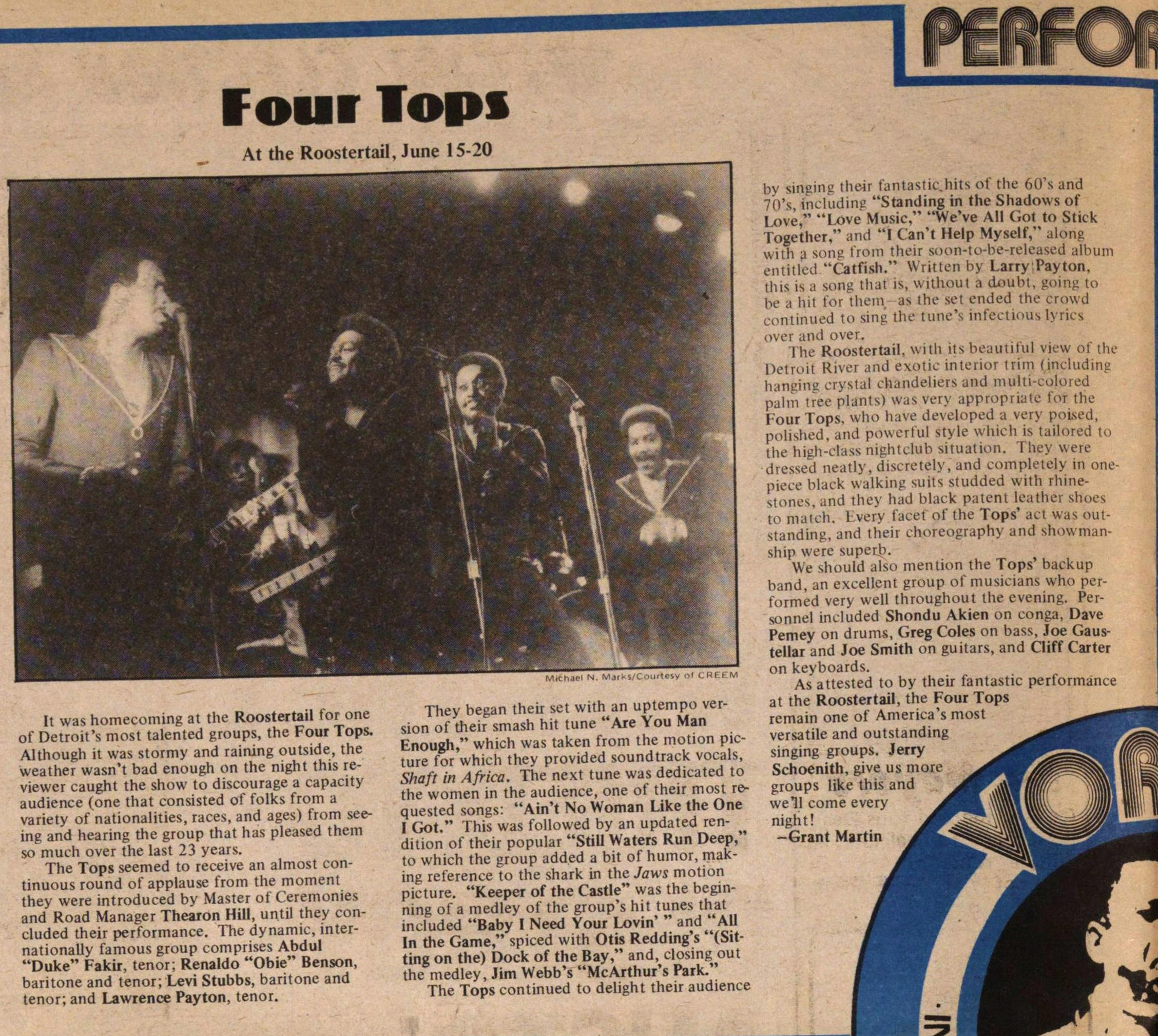 It was homecoming at the Roostertail for one of Detroit 's most talented groups, the Four Tops. Although it was stormy and raining outside, the weather wasn't bad enough on the night this reviewer caught the show to discourage a capacity audience (one that consisted of folks from a variety of nationalities, races, and ages) from seeing and hearing the group that has pleased them so much over the last 23 years.

The Tops seemed to receive an almost continuous round of applause from the moment they were introduced by Master of Ceremonies and Road Manager Thearon Hill, until they concluded their performance. The dynamic, internationally famous group comprises AbduI "Duke" Fakir, tenor; Renaldo "Obie" Benson, baritone and tenor; Levi Stubbs, baritone and tenor; and Lawrence Payton, tenor.

They began their set with an uptempo version of their smash hit tune "Are You Man Enough," which was taken from the motion picture for which they provided soundtrack vocals, Shaft in Africa. The next tune was dedicated to the women in the audience, one of their most requested songs: "Ain't No Woman Like the One I Got." This was followed by an updated rendition of their popular "Still Waters Run Deep, to which the group added a bit of humor, making reference to the shark in the Jaws motion picture. "Keeper of the Castle" was the beginning of a medley of the group's hit tunes that included "Baby I Need Your Lovin' " and "All In the Game," spiced with Otis Redding's "(Sitting on the) Dock of the Bay," and, closing out the medley, Jim Webb's "McArthur's Park.

The Tops continued to delight their audience by singing their fantastic hits of the 60's and 70's, Including "Standing in the Shadows of Love," "Love Music," "We've All Got to Stick Together," and "I Can't Help Myself," along with a song from their soon-to-be-released album entitled "Catfish." Written by LarryPayton. This is a song that is, without a doubt, going to be a hit for them- as the set ended the Crowd continued to sing the tune's infectious lyrics over and over.

The Roostertail, with its beautiful view ot the Detroit River and exotic interior trim (including hanging crystal chandeliers and multi-colored palm tree plants) Was very appropriate for the Four Tops, who have developed a very poised, polished, and powerful Style which is tailored to the high-class night club situation. They were dressed neatly, discretely and completely in one piece black walking suits studded with rhinestones, and they had black patent leather shoes to match, Every facet of the Tops' act was outstanding, and their choreography and showmanship were superb.

We should also mention the Tops backup band, an excellent group of musicians who performed very well throughout the evening. Personnel included Shondu Akien on conga, Dave Pemey on drums, Greg Coles on bass, Joe Gaustellar and Joe Smith on guitars, and Cliff Carter on keyboards.

As attested to by their fantastic performance at the Roostertail, the Four Tops remain one of America's most versatile and outstanding singing groups. Jerry Schoenith, give us more groups like this and we'll come every night!