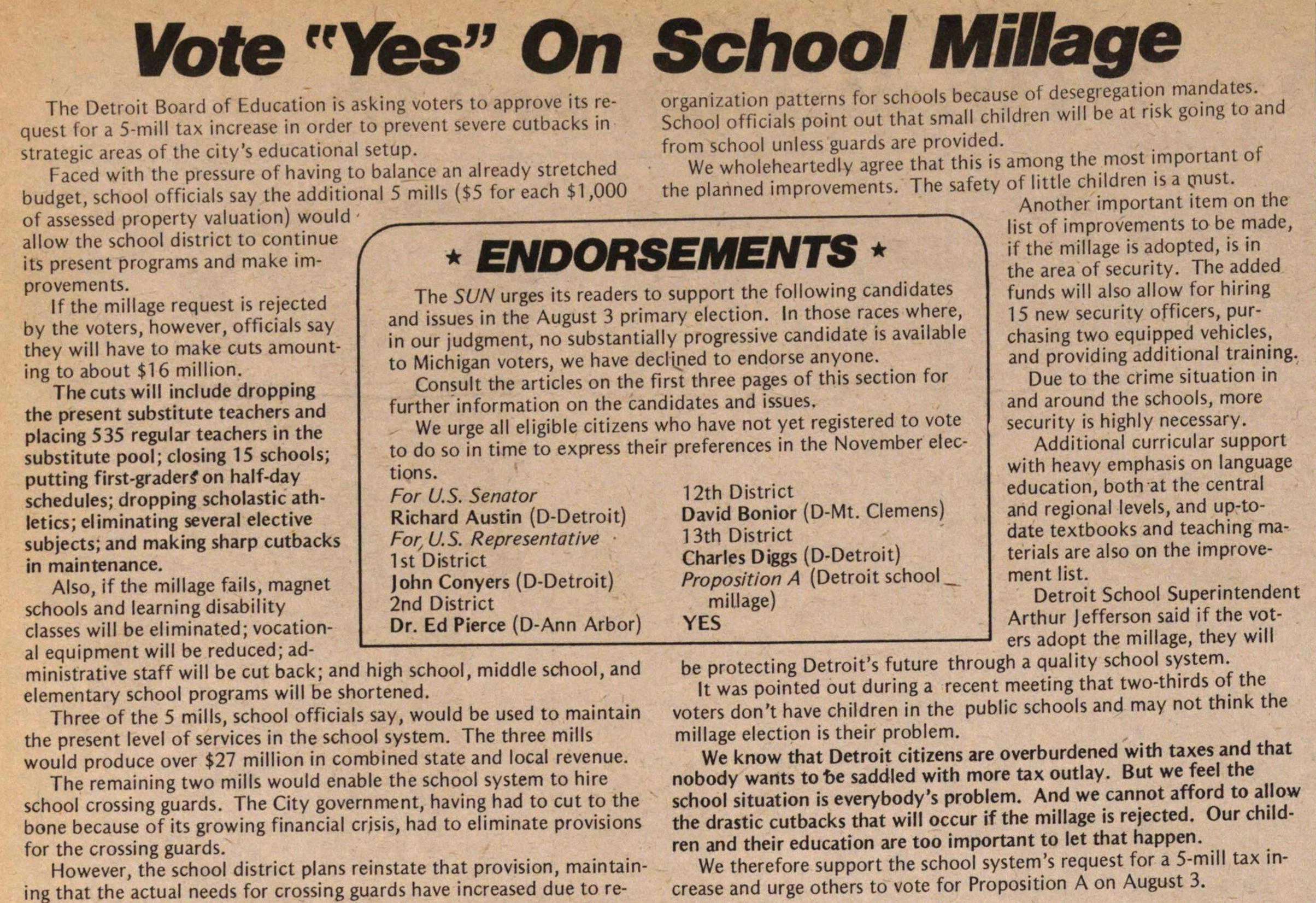 The Detroit Board of Education is asking voters to approve its request for a 5-mill tax increase in order to prevent severe cutbacks in strategic areas of the city's educational setup.

Faced with the pressure of having to balance an already stretched budget, school officials say the additional 5 milis ($5 for each $1 ,000 of assessed property valuation) would allow the school district to continue its present programs and make improvements.

If the millage request is rejected by the voters, however, officials say they will have to make cuts amounting to about $16 million.

Also, if the millage fails, magnet schools and learning disability classes will be eliminated; vocational equipment will be reduced, administrative stuff will be cut back; and high school, middle school, and elementary school programs will be shortened.

Three of the 5 milis, school officials say, would be used to maintain the present level of services in the school system.

The three milis would produce over $27 million in combined state and local revenue. The remaining two milis would enable the school system to hire school crossing guards. The City government, having had to cut to the bone because of its growing financial crjsis, had to eliminate provisions for the crossing guards.

However, the school district plans reinstate that provision, maintaining that the actual needs for crossing guards have increased due to organization patterns for schools because of desegregation manda tes School officials point out that small children will be at risk going to and from school unless guards are provided.

We wholeheartedly agree that this is among the most important of the planned improvements. The safety of little children ís a must.

Another important item on the list of improvements to be made, if the millage is adopted, is in the area of security. The added funds will also allow for hiring 15 new security officers, purchasing two equipped vehicles, and providing additional training.

Due to the crime situation in and around the schools, more security is highly necessary.

Additional curricular support with heavy emphasis on language education, both at the central and regional levels, and up-to-date textbooks and teaching materials are also on the improvement list.

Detroit School Superintendent Arthur Jefferson said if the voters adopt the millage, they will be protecting Detroit's future through a quality school system.

It was pointed out during a recent meeting that two-thirds of the voters don't have children in the public schools and may not think the millage election is their problem.

We know that Detroit citizens are overburdened with taxes and that nobody wants tofce saddled with more tax outlay. But we feel the school situation is everybody's problem. And we cannot afford to allow the drastic cutbacks that will occur if the millage is rejected. Our children and their education are too important to let that happen.

We therefore support the school system's request for a 5-mill tax increase and urge others to vote for Proposition A on August 3.

The SUN urges its readers to support the following candidates and issues in the August 3 primary election. In those races where, in our judgment, no substantially progressive candidate is available to Michigan voters, we have declined to endorse anyone.

Consult the articles on the first three pages of this section for further information on the candidates and issues.

We urge all eligible citizens who have not yet registered to vote to do so in time to express their preferences in the November elections.