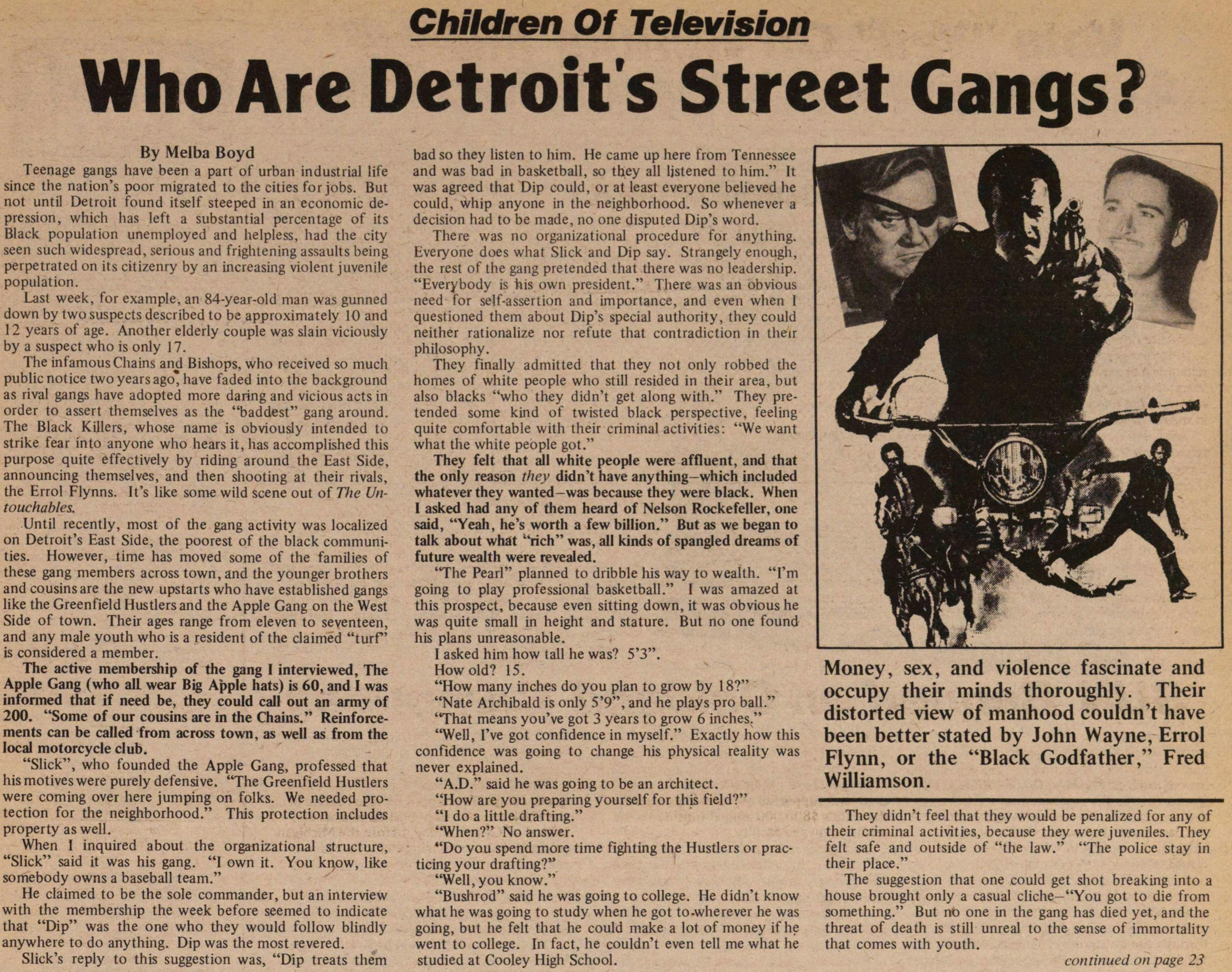 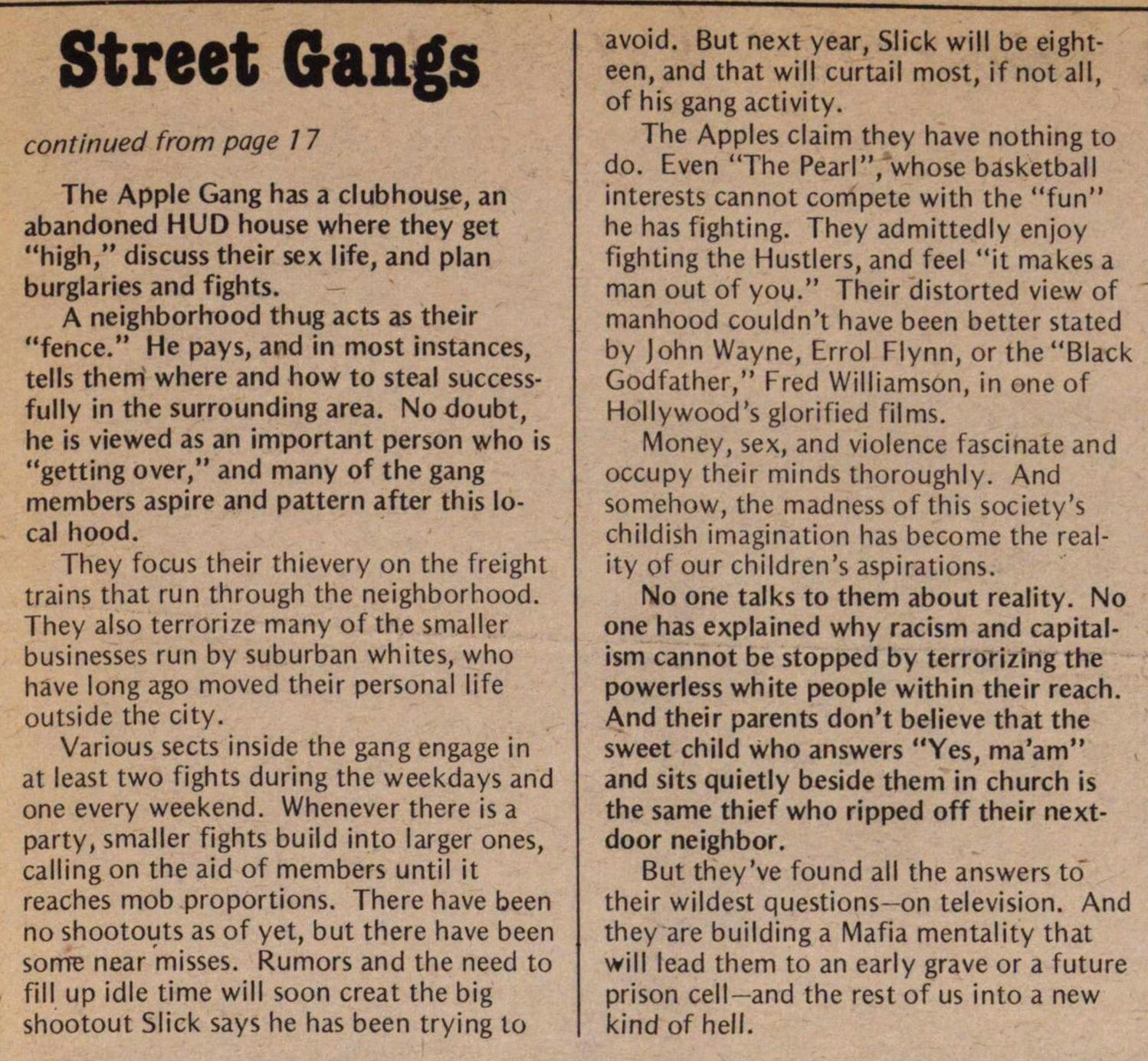 Who Are Detroit's Street Gangs

Money, sex, and violence fascinate and occupy their minds thoroughly. Their distorted view of manhood couldn't have been better stated by John Wayne, Errol Flynn, or the "Black Godfather," Fred Williamson.

Teenage gangs have been a part of urban industrial life since the nation's poor migrated to the cities for jobs. But not until Detroit found itself steeped in an economic depression, which has left a substantial percentage of its Black population unemployed and helpless, had the city seen such widespread, serious and frightening assaults being perpetrated on its citizenry by an increasing violent juvenile population.

Last week, for example, an 84-year-old man was gunned down by two suspects described to be approximately 10 and 12 years of age. Another elderly couple was slain viciously by a suspect who is only 17.

The infamous Chains and Bishops, who received so much public notice two years ago have faded into the background as rival gangs have adopted more daring and vicious acts in order to assert themselves as the "baddest" gang around. The Black Killers, whose name is obviously intended to strike fear into anyone who hears it, has accomplished this purpose quite effectively by riding around the East Side, announcing themselves, and then shooting at their rivals, the Errol Flynns. It's like some wild scene out of The Untouchables.

Until recently, most of the gang activity was localized on Detroit's East Side, the poorest of the black communities. However, time has moved some of the families of these gang members across town, and the younger brothers and cousins are the new upstarts who have established gangs like the Greenfield Hustlers and the Apple Gang on the West Side of town. Their ages range from eleven to seventeen, and any male youth who is a resident of the claimed "turf is considered a member.

The active membership of the gang I interviewed, The Apple Gang (who all wear Big Apple hats) is 60, and I was informed that if need be, they could call out an army of 200. "Some of our cousins are in the Chains." Reinforcements can be called from across town, as well as from the local motorcycle club.

"Slick", who founded the Apple Gang, professed that his motives were purely defensive. "The Greenfield Hustlers were coming over here jumping on folks. We needed protection for the neighborhood." This protection includes property as well.

When I inquired about the organizational structure, "Slick" said it was his gang. "I own it. You know, like somebody owns a baseball team."

He claimed to be the sole commander, but an interview with the membership the week before seemed to indicate that "Dip" was the one who they would follow blindly anywhere to do anything. Dip was the most revered.

Slick's reply to this suggestion was, "Dip treats them bad so they listen to him. He came up here from Tennessee and was bad in basketball, so they all listened to him." It was agreed that Dip could, or at least everyone believed he could, whip anyone in the neighborhood. So whenever a decision had to be made, no one disputed Dip's word.

There was no organizational procedure for anything. Everyone does what Slick and Dip say. Strangely enough, the rest of the gang pretended that there was no leadership. "Everybody is his own president." There was an obvious need for self-assertion and importance, and even when I questioned them about Dip's special authority, they could neither rationalize nor refute that contradiction in their philosophy.

They finally admitted that they not only robbed the homes of white people who still resided in their area, but also blacks "who they didn't get along with." They pretended some kind of twisted black perspective, feeling quite comfortable with their criminal activities: "We want what the white people got."

They felt that all white people were affluent, and that the only reason they didn't have anything -which included whatever they wanted-was because they were black. When I asked had any of them heard of Nelson Rockefeller, one said, "Yeah, he's worth a few billion." But as we began to talk about what '"rich" was, all kinds of spangled dreams of future wealth were revealed.

'The Pearl" planned to dribble his way to wealth. "l'm going to play professional basketball." I was amazed at this prospect, because even sitting down, it was obvious he was quite small in height and stature. But no one found his plans unreasonable.

"Well, I've got confidence in myself." Exactly how this confidence was going to change his physical reality was never explained.

"A.D." said he was going to be an architect.

"How are you preparing yourself for this field?"

"I do a little drafting."

"Do you spend more time fïghting the Hustlers or practicing your drafting?"

They didn't feel that they would be penalized for any of their criminal activities, because they were juveniles. They felt safe and outside of "the law." "The police stay in their place."

The suggestion that one could get shot breaking into a house brought only a casual cliche-"You got to die from something." But no one in the gang has died yet, and the threat of death is still unreal to the sense of immortality that comes with youth.

The Apple Gang has a clubhouse, an abandoned HUD house where they get "high," discuss their sex life, and plan burglaries and fights.

A neighborhood thug acts as their "fence." He pays, and in most instances, tells them where and how to steal successfully in the surrounding area. No doubt, he is viewed as an important person who is "getting over," and many of the gang members aspire and pattern after this local hood.

They focus their thievery on the freight trains that run through the neighborhood. They also terrorize many of the smaller businesses run by suburban whites, who have long ago moved their personal life outside the city.

Various sects inside the gang engage in at least two fights during the weekdays and one every weekend. Whenever there is a party, smaller fights build into larger ones, calling on the aid of members until it reaches mob proportions. There have been no shootouts as of yet, but there have been some near misses. Rumors and the need to fill up idle time will soon creat the big shootout Slick says he has been trying lo avoid. But next year, Slick will be eighteen, and that will curtail most, if not all, of his gang activity.

The Apples claim they have nothing to do. Even "The Pearl' whose basketball interests cannot compete with the "fun" he has fighting. They admittedly enjoy fighting the Hustlers, and feel "it makes a man out of you." Their distorted view of manhood couldn't have been better stated by John Wayne, Errol Flynn, or the "Black Godfather," Fred Williamson, in one of Hollywood 's glorified films.

Money, sex, and violence fascinate and occupy their minds thoroughly. And somehow, the madness of this society's childish imagination has become the reality of our children's aspirations. No one talks to them about reality.

No one has explained why racism and capitalism cannot be stopped by terrorizing the powerless white people within their reach. And their parents don't believe that the sweet child who answers "Yes, ma'am" and sits quietly beside them in church is the same thief who ripped off their nextdoor neighbor.

But they've found all the answers to" their wildest questions- on television. And they are building a Mafia mentality that will lead them to an early grave or a future prison cell- and the rest of us into a new kind of hell.