Judge In Collusion With Prosecutors 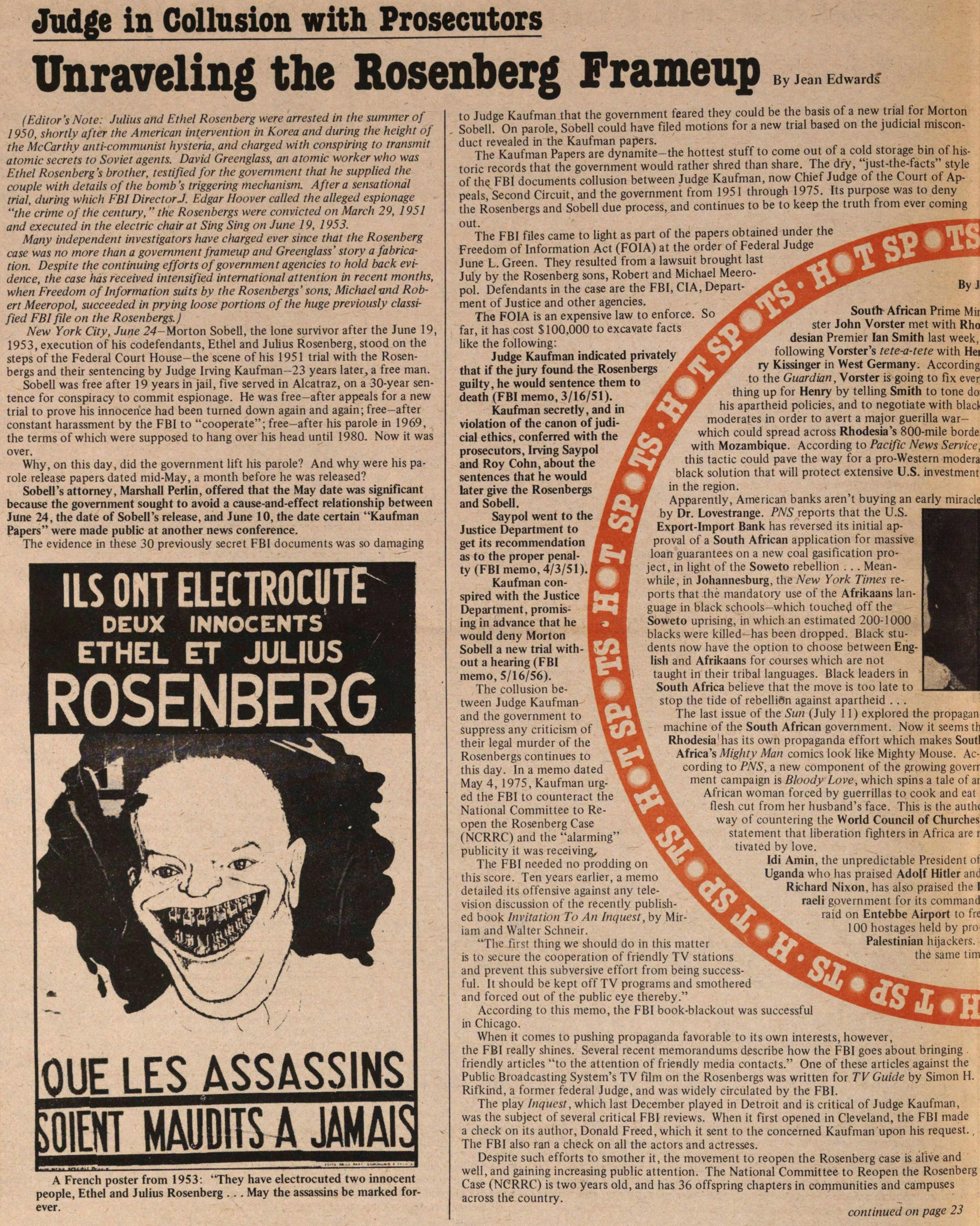 Judge in Collusion with Prosecutors

Unraveling the Rosenberg Frame up

(Editor 's Note: Julius and Ethel Rosenberg were arrested in the summer of 1950, shortly after the American intervention in Korea and during the height of the McCarthy anti-communist hysteria, and charged with conspiring to transmit atomic secrets to Soviet agents. David Greenglass, an atomic worker who was Ethel Rosenberg's brother, testified for the government that he supplied the couple with details of the bomb's triggering mechanism. After sensational trial, during which FBI Director J. Edgar Hoover called the alleged espionage "the crime of the century, " the Rosenbergs were convicted on March 29, 1951 and executed in the electric chair Sing Sing on June 19, 1953.

Many independent investigators have charged ever since that the Rosenberg case was no more than a government frameup and Greenglass ' story a fabrication. Despite the continuing efforts of government agencies to hold back evidence, the case has received intensified international attention in recent months, when Freedom of Information suits by the Rosenbergs' sons, Michael and Robert Meeropol, succeeded in prying loose portions of the huge previously classified FBI file on the Rosenbergs.)

New York City, June 24-Morton Sobell, the lone survivor after the June 19, 1953, execution of his codefendants, Ethel and Julius Rosenberg, stood on the steps of the Federal Court House-the scene of his 1951 trial with the Rosenbergs and their sentencing by Judge Irving Kaufman-23 years later, a free man.

Sobell was free after 19 years in jail, five served in Alcatraz, on a 30-year sentence for conspiracy to commit espionage. He was free- after appeals for a new trial to prove his innocence had been turned down again and again; free- after constant harassment by the FBI to "cooperate"; free-after his parole in 1969, the terms of which were supposed to hang over his head until 1980. Now it was over.

Why, on this day, did the government lift his parole? And why were his parole release papers dated mid-May, a month before he was released?

SobelI's attorney, Marshall Perlin, offered that the May date was significant because the government sought to avoid a cause-and-effect relationship between June 24, the date of SobelI's release, and June 10, the date certain "Kaufman Papers" were made public at another news conference.

The evidence in these 30 previously secret FBI documents was so damaging to Judge Kaufman that the government feared they could be the basis of a new trial for Morton Sobell. On parole, Sobell could have filed motions for a new trial based on the judicial misconduct revealed in the Kaufman papers.

The Kaufman Papers are dynamite-the hottest stuff to come out of a cold storage bin of historic records that the government would rather shred than share. The dry, "just-the-facts" style of the FBI documents collusion between Judge Kaufman, now Chief Judge of the Court of Appeals Second Circuit, and the government from 1951 through 1975. lts purpose was to deny the Rosenbergs and Sobell due process, and continues to be to keep the truth from ever coming out.

The FBI files came to light as part of the papers obtained under the freedom of information Act (FOIA) at the order of Federal Judge June L. Green. They resulted from a lawsuit brought last July by the Rosenberg sons. Robert and Michael Meeropol. Defendants in the case are the FBI, CIA, Department of Justice and other agencies.

The FOIA is an expensive law to enforce. So far, it has cost $ 100,000 to excavate facts  like the following:

Judge Kaufman indicated privately that if the jury found the Rosenbergs guilty, he would sentence them to death (FBI memo, 3/16/51).

Kaufman secretly , and in violation of the canon of judicial ethics, conferred with the prosecutors, Irving Saypol and Roy Cohn, about the sentences that he would later give the Rosenbergs and Sobell.

Saypol went to the Justice Department to get its recommendation as to the proper penalty (FBI memo, 4/3/51)

Kaufman conspired with the Justice Department, promising in advance that he would deny Morton Sobell a new trial without a hearing (FBI memo, 5/16/56).

The collusion between Judge Kaufman and the government to suppress any criticism of their legal murder of the Kosenoergs continues to this day. In a memo dated  May 4, 1975, Kaufman urged the FBI to counteract the National Committee to Reopen the Rosenberg Case (NCRRC) and the "alarming" Publicity it was receiving.

The FBI needed no prodding on this score. Ten years earlier, a memo detailed its offensive against any television discussion of the recently published book Invitation to An Inquest, by Miriam and Walter Schneir.

"The first thing we should do in this matter is to secure the cooperation of friendly TV stations and prevent this subversive effort from being successful. lt should be kept oft TV programs and smothered and forced out of the public eye thereby."

According to this memo, the FBI book-blackout was successful in Chicago.

When it comes to pushing propaganda favorable to its own interests, however, the FBI really shines. Several recent memorandums describe how the FBI goes about bringing friendly articles "to the attention of friendly media contacts." One of these articles against the Public Broadcasting System's TV film on the Rosenbergs was written for TV guide by Simon H. Rifkind, a former federal Judge, and was widely circulated by the FBI.

The play Inquest, which last December played in Detroit and is critical of Judge Kaufman, was the subject of several critical FBI reviews. When it first opened in Cleveland, the FBI made a check on its author, Donald F reed, which it sent to the concerned Kaufman upon his request. , The FBI also ran a check on all the actors and actresses.

Despite such efforts to smother it, the movement to reopen the Rosenberg case is alive and well.and gaining increasing public attention. The National Committee to Reopen the Rosenberg Case (NCRRC) is two years old, and has 36 offspring chapters in communities and campuses across the country.

The NCRRC recently forced the government to release 33,000 pages from the Rosenberg files, and it estimates that these are only 6 per cent of the total file. The Committee has also won a precedent-setting court ruling, an injunction against the government to prevent further destruction of Rosenberg records. And in the process, NCRRC became the case for testing the FOIA itself.

But why has the government opened only 6 per cent of the Rosenberg files in one year? What are they afraid of?

"It is 23 years since our parents proclaimed their innocence with their lives," observe Robert and Michael Meeropol, "but the government still shows the need today to cover up the record of their frameup."