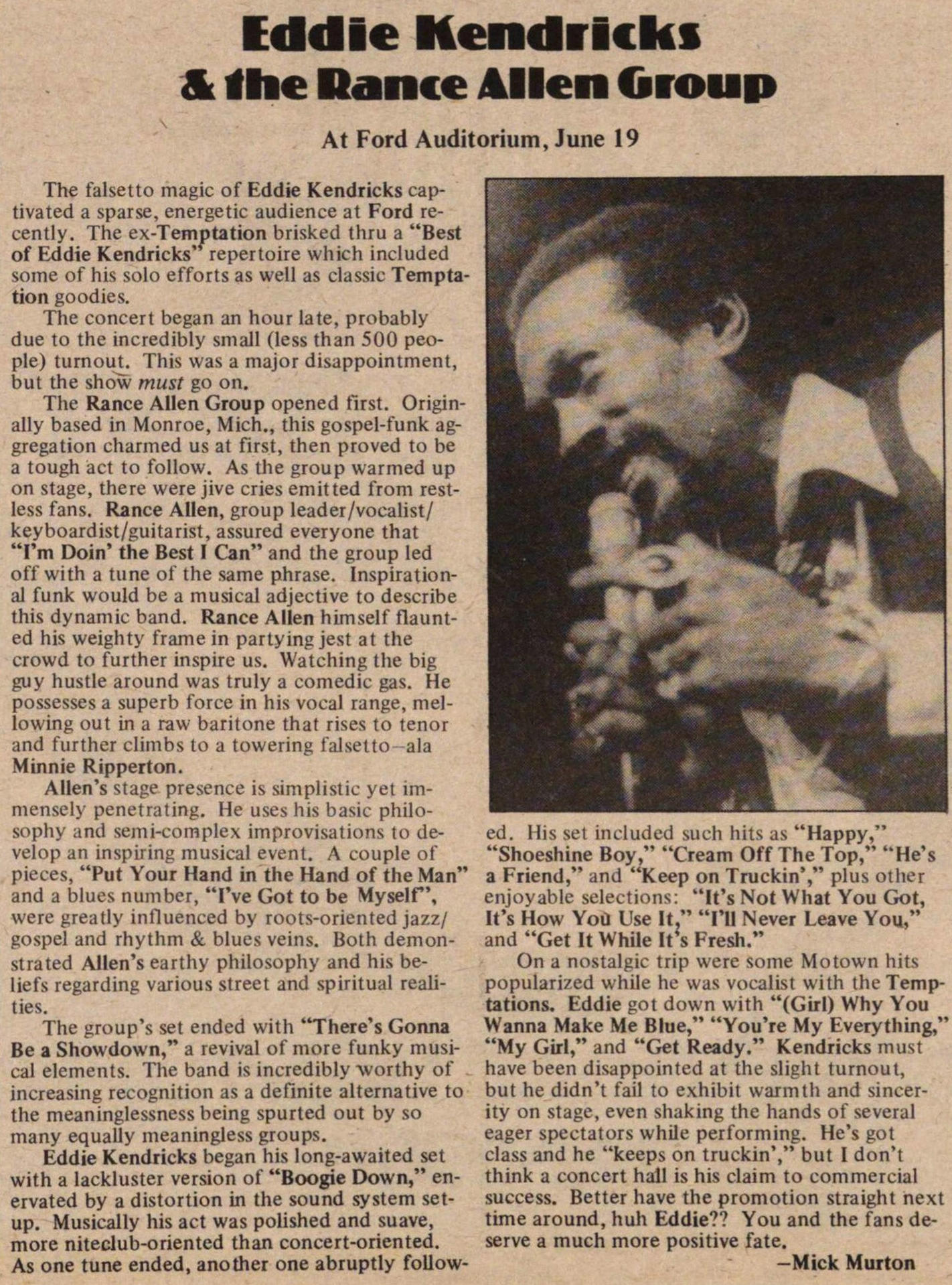 The concert began an hour late, probably due to the incredibly small (less than 500 people) turnout. This was a major disappointment, but the show must go on.

The Ranee Allen Group opened fïrst. Originally based in Monroe, Mich., this gospel-funk aggregation charmed us at first, then proved to be a tough act to follow. As the group warmed up on stage, there were jive cries emitted from restless fans. Ranee Alien, group leader/vocalist/keyboardist/guitarist, assured everyone that "I'm Doin the Best I Can" and the group led off with a tune of the same phrase. Inspirational funk would be a musical adjective to describe this dynamic band. Ranee Allen himself flaunted his weighty frame in partying jest at the crowd to further inspire us. Watching the big guy hustle around was truly a comedie gas. He possesses a superb force in his vocal range, mellowing out in a raw baritone that rises to tenor and further climbs to a towering falselto -ala Minnie Ripperton.

Allen's stage presence is simplistic yet immensely penetrating. He uses his basic philosophy and semi-complex improvisations to develop an inspiring musical event. A couple of pieces, "Put Your Hand in the Hand of the Man" and a blues number, "I've Got to be Myself', were greatly influenced by roots-oriented jazz gospel and rhythm & blues veins. Both demonstrated Allen's earthy philosophy and his beliefs regarding various street and spiritual realities.

The group's set ended with "There's Gonna Be a Showdown," a revival of more funky musical elements. The band is incredibly worthy of increasing recognition as a definite alternative to the meaninglessness being spurted out by so many equally meaningless groups.

Eddie Kendricks began his long-awaited set with a lackluster version of "Boogie Down," enervated by a distortion in the sound system setup. Musically his act was polished and suave, more niteclub-oriented than concert-oriented. As one tune ended, another one abruptly followed. His set includcd such hits as "Happy," "Shoeshine Boy," "Cream Off The Top," "He's a Friend," and "Keep on Truckin'," plus other enjoyable selections: "It's Not What You Got, It's How You Use It" "I'll Never Leave You," and "Get It While It s Fresh."

On a nostalgic trip were some Motown hits popularized while he was vocalist with the Temptations. Eddie got down with "(Girl) Why You Wanna Make Me Blue," "You're My Everything," "My Girl," and "Get Ready." Kendricks must have been disappointed at the slight turnout, but he didn't fail to exhibit warmth and sincerity on stage, even shaking the hands of several eager spectators while performing. He's got class and he "keeps on truckin'," but I don't think a concert hall is his claim to commercial success. Better have the promotion straight next time around, huh Eddie?? You and the fans deserve a much more positive fate.