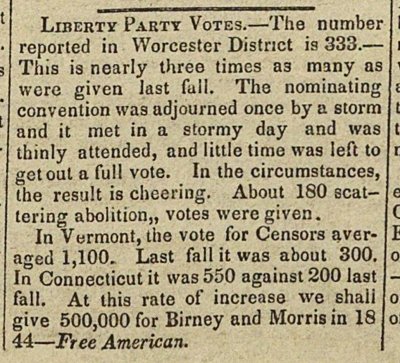 The numberreported in Worcester Distnct is 333. - This is nearly three times as many as wcrc given last fail. The nominating convention was adjourned once by a storm and it met in a stormy day and was hinly attended, and little time was left to getout a full vote. In the circumstances, tie result is cheering. About 180 scatering abolition,, votes were given. In Vermont, the vote for Censors averged 1,100, Last fall it was about 300. n Connecticut it was 550 against 200 last all. At this rate of increase we shaii ive 500,000 for Birney and Morris in 18