Democrats To Meet In Detroit Key State Posts Up For Grabs 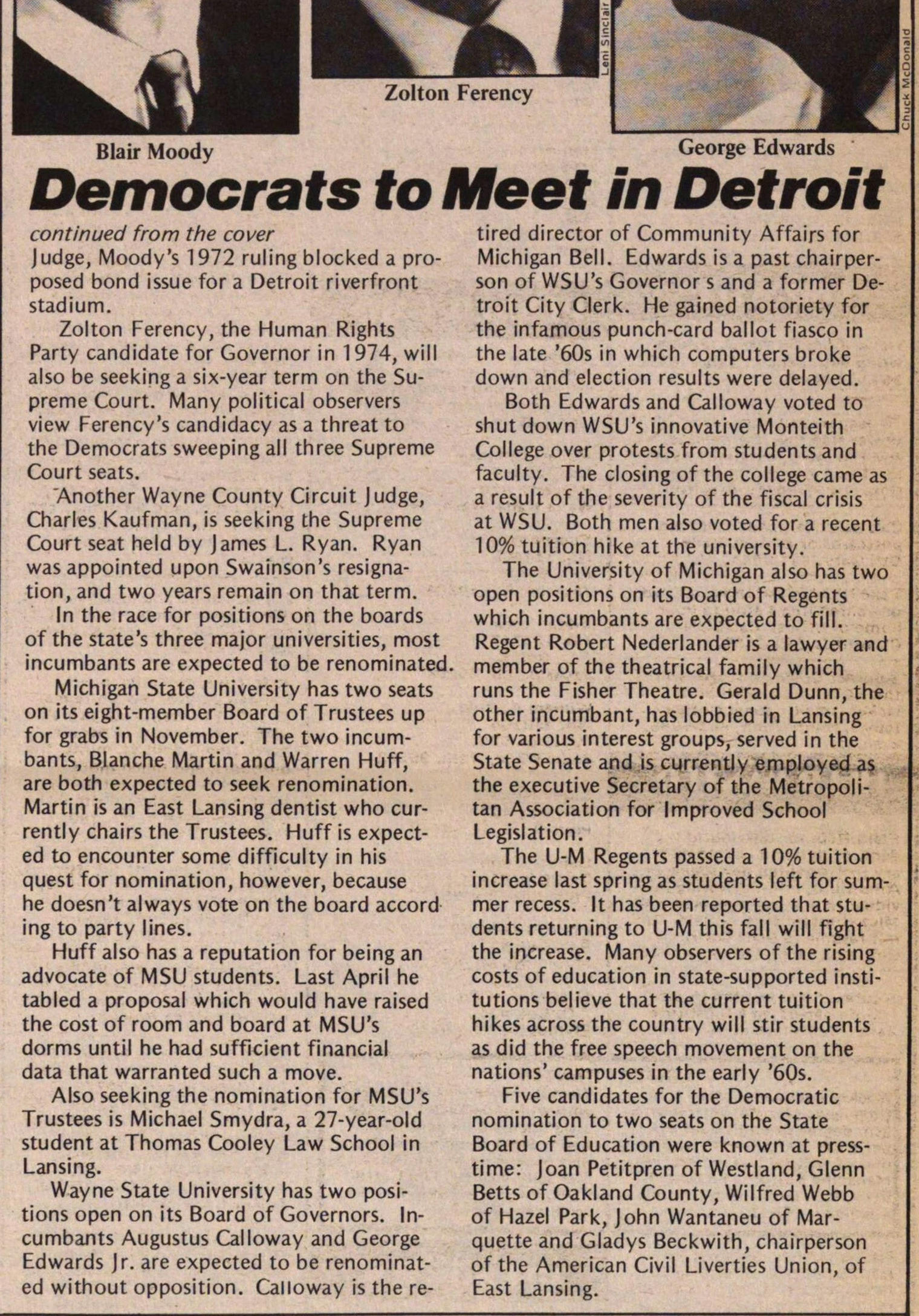 The 1976 Michigan Democratic State Convention will play a poor second to this year's gala Democratic and Republican National Conventions. Nonetheless, important seats for the State Supreme Court and key state educational posts are up for grabs.
The convention, held at Detroit's Cobo Hall August 27-29, is expected to be mild in tone compared to previous gatherings because of the Democrats' national efforts towards unity behind their man from Plains, Georgia.
The only anticipated platform fights centered on the question of safeguards for the construction of nuclear energy plants and the transportation and disposal of nuclear waste. The nuclear safeguards resolution was narrowly passed at a recent Democrat State Central meeting, but its future is questionable once it reaches the convention floor.
Gone from this year's convention will be such showdowns as the 1970 fight over amnesty for draft evaders or the 1974 floor fight over party reforms.
Those quarrels split state Dems and probably assured Republican William Milliken the governor's chair in each of those election years. Even the wins of liberal-left Democrats Ed Pierce (2nd district) and Dave Bonior (12th district) in this year's primary are not expected to signal a rise of progressiveness in the party.
An early list of party nominees for the November election consists mostly of incumbants.. For the Michigan Supreme Court there are three positions open, two brought about unexpectedly.
Michigan Supreme Court Chief Justice Thomas G. Kavanagh is seeking re-election to a regular eight-year term, and the death of Thomas M. Kavanagh and the controversial resignation of John B. Swainson have left the two other vacancies.
Gov. Milliken's appointment of two Republicans to the state's highest court within the last two years created the first Republican majority on the seven-member court since 1956. The Republicans, in order to keep the posts they were appointed to, must win state-wide election this year.
The Democrats will have two nominees in the technically non-partisan November election. Blair Moody Jr. is attempting to win an abbreviated six-year term on the court, the term remaining after Thomas M. Kavanagh 's death. Moody was a nominee for a regular eight-year term in 1974 but lost by a narrow margin to John Fitzgerald. As a Wayne County Circuit ..

Democrats to Meet in Detroit

..Judge, Moody's 1972 ruling blocked a proposed bond issue for a Detroit riverfront stadium.
Zolton Ferency, the Human Rights Party candidate for Governor in 1974, will also be seeking a six-year term on the Supreme Court. Many political observers view Ferency's candidacy as a threat to the Democrats sweeping all three Supreme Court seats.
Another Wayne County Circuit Judge, Charles Kaufman, is seeking the Supreme Court seat held by James L. Ryan. Ryan was appointed upon Swainson's resignation, and two years remain on that term. In the race for positions on the boards of the state's three major universities, most incumbants are expected to be renominated.
Michigan State University has two seats on its eight-member Board of Trustees up for grabs in November. The two incumbants, Blanche Martin and Warren Huff, are both expected to seek renomination. Martin is an East Lansing dentist who currently chairs the Trustees. Huff is expected to encounter some difficulty in his quest for nomination, however, because he doesn't always vote on the board according to party lines.
Huff also has a reputation for being an advocate of MSU students. Last April he tabled a proposal which would have raised the cost of room and board at MSU's dorms until he had sufficient financial data that warranted such a move.
Also seeking the nomination for MSU's Trustees is Michael Smydra, a 27-year-old student at Thomas Cooley Law School in Lansing.
Wayne State University has two positions open on its Board of Governors. Incumbants Augustus Calloway and George Edwards Jr. are expected to be renominated without opposition. Calloway is the retired director of Community Affairs for Michigan Bell. Edwards is a past chairperson of WSU's Governor s and a former Detroit City Clerk. He gained notoriety for the infamous punch-card ballot fiasco in the late '60s in which computers broke down and election results were delayed.
Both Edwards and Calloway voted to shut down WSU's innovative Monteith College over protests from students and faculty. The closing of the college came as a result of the severity of the fiscal crisis at WSU. Both men also voted for a recent 10% tuition hike at the university.
The University of Michigan also has two open positions on its Board of Regents which incumbants are expected to fill. Regent Robert Nederlander is a lawyer and member of the theatrical family which runs the Fisher Theatre. Gerald Dunn, the other incumbant, has lobbied in Lansing for various interest groups, served in the State Senate and is currently employed as the executive Secretary of the Metropolitan Association for Improved School Legislation.
The U-M Regents passed a 10% tuition iincrease last spring as students left for summer recess. It has been reported that students returning to U-M this fall will fight the increase. Many observers of the rising costs of education in state-supported institutions believe that the current tuition hikes across the country will stir students as did the free speech movement on the nations' campuses in the early '60s.
Five candidates for the Democratic nomination to two seats on the State Board of Education were known at press-time: Joan Petitpren of Westland, Glenn Betts of Oakland County, Wilfred Webb of Hazel Park, John Wantaneu of Marquette and Gladys Beckwith, chairperson of the American Civil Liverties Union, of East Lansing.