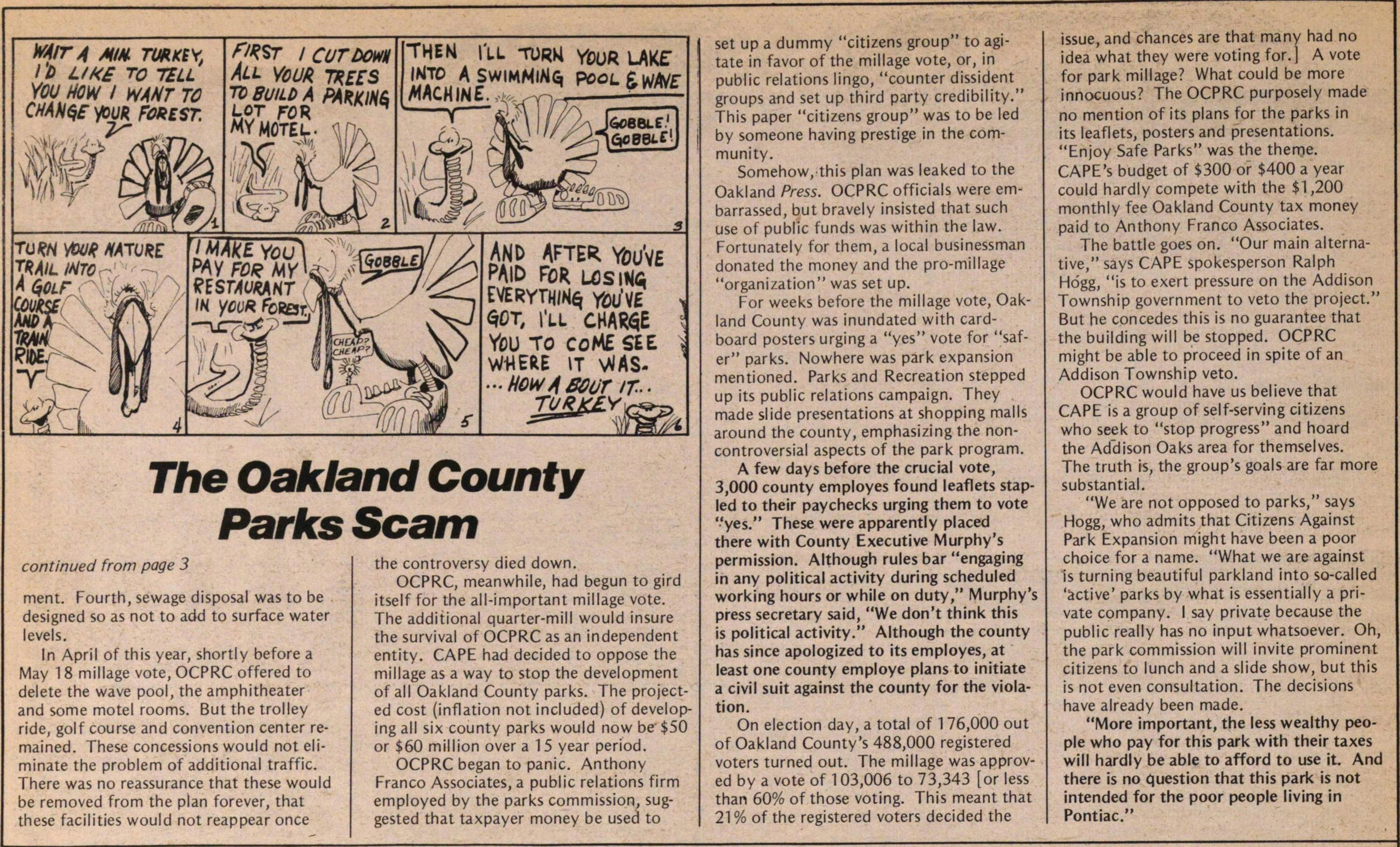 The Addison Oaks plan includes a wave-action pool along with such potential money-makers as a 5,000-seat Amphitheatre, a 100-room motel facility, an electric trolley system and a carpeted beach.

-ment. Fourth, sewage disposal was to be designed so as not to add to surface water levels.
In April of this year, shortly before a May 18 millage vote, OCPRC offered to delete the wave pool, the amphitheater and some motel rooms. But the trolley ride, golf course and convention center remained. These concessions would not eliminate the problem of additional traffic. There was no reassurance that these would be removed from the plan forever, that these facilities would not reappear once the controversy died down.
OCPRC, meanwhile, had begun to gird itself for the all-important millage vote. The additional quarter-mill would ensure the survival of OCPRC as an independent entity. CAPE had decided to oppose the millage as a way to stop the development of all Oakland County parks. The projected cost (inflation not included) of developing all six county parks would now be $50 or $60 million over a 15 year period.
OCPRC began to panic. Anthony Franco Associates, a public relations firm employed by the parks commission, suggested that taxpayer money be used to set up a dummy "citizens group" to agitate in favor of the millage vote, or, in public relations lingo, "counter dissident groups and set up third party credibility." This paper "citizens group" was to be led by someone having prestige in the community. Somehow this plan was leaked to the Oakland Press. OCPRC officials were embarrassed, but bravely insisted that such use of public funds was within the law. Fortunately for them, a local businessman donated the money and the pro-millage "organization" was set up.
For weeks before the millage vote, Oakland County was inundated with cardboard posters urging a "yes" vote for "safer" parks. Nowhere was park expansion mentioned. Parks and Recreation stepped up its public relations campaign. They made slide presentations at shopping mails around the county, emphasizing the noncontroversial aspects of the park program.
A few days before the crucial vote, 3,000 county employees found leaflets stapled to their paychecks urging them to vote "yes." These were apparently placed there with County Executive Murphy's permission. Although rules bar "engaging in any political activity during scheduled working hours or while on duty," Murphy's press secretary said, "We don't think this is political activity." Although the county has since apologized to its employes, at least one county employe plans to initiate a civil suit against the county for the violation.
On election day, a total of 176,000 out of Oakland County's 488,000 registered voters turned out. The millage was approved by a vote of 103,006 to 73,343 [or less than 60% of those voting. This meant that 21 % of the registered voters decided the issue, and chances are that many had no idea what they were voting for.] A vote for park millage? What could be more innocuous? The OCPRC purposely made no mention of its plans for the parks in its leaflets, posters and presentations. "Enjoy Safe Parks" was the theme.
CAPE 's budget of $300 or $400 a year could hardly compete with the $1,200 monthly fee Oakland County tax money paid to Anthony Franco Associates. The battle goes on. "Our main alternative," says CAPE spokesperson Ralph Hogg, "is to exert pressure on the Addison Township government to veto the project." But he concedes this is no guarantee that the building will be stopped. OCPRC might be able to proceed n spite of an Addison Township veto.
OCPRC would have us believe that CAPE is a group of self-serving citizens who seek to "stop progress" and hoard the Addison Oaks area for themselves. The truth is, the group's goals are far more substantial.
"We are not opposed to parks," says Hogg, who admits that Citizens Against Park Expansion might have been a poor choice for a name. "What we are against is turning beautiful parkland into so-called 'active' parks by what is essentially a private company. I say private because the public really has no input whatsoever. Oh, the park commission will invite prominent citizens to lunch and a slide show, but this is not even consultation. The decisions have already been made.
"More important, the less wealthy people who pay for this park with their taxes will hardly be able to afford to use t. And there is no Question that this park is not intended for the poor people living in Pontiac."