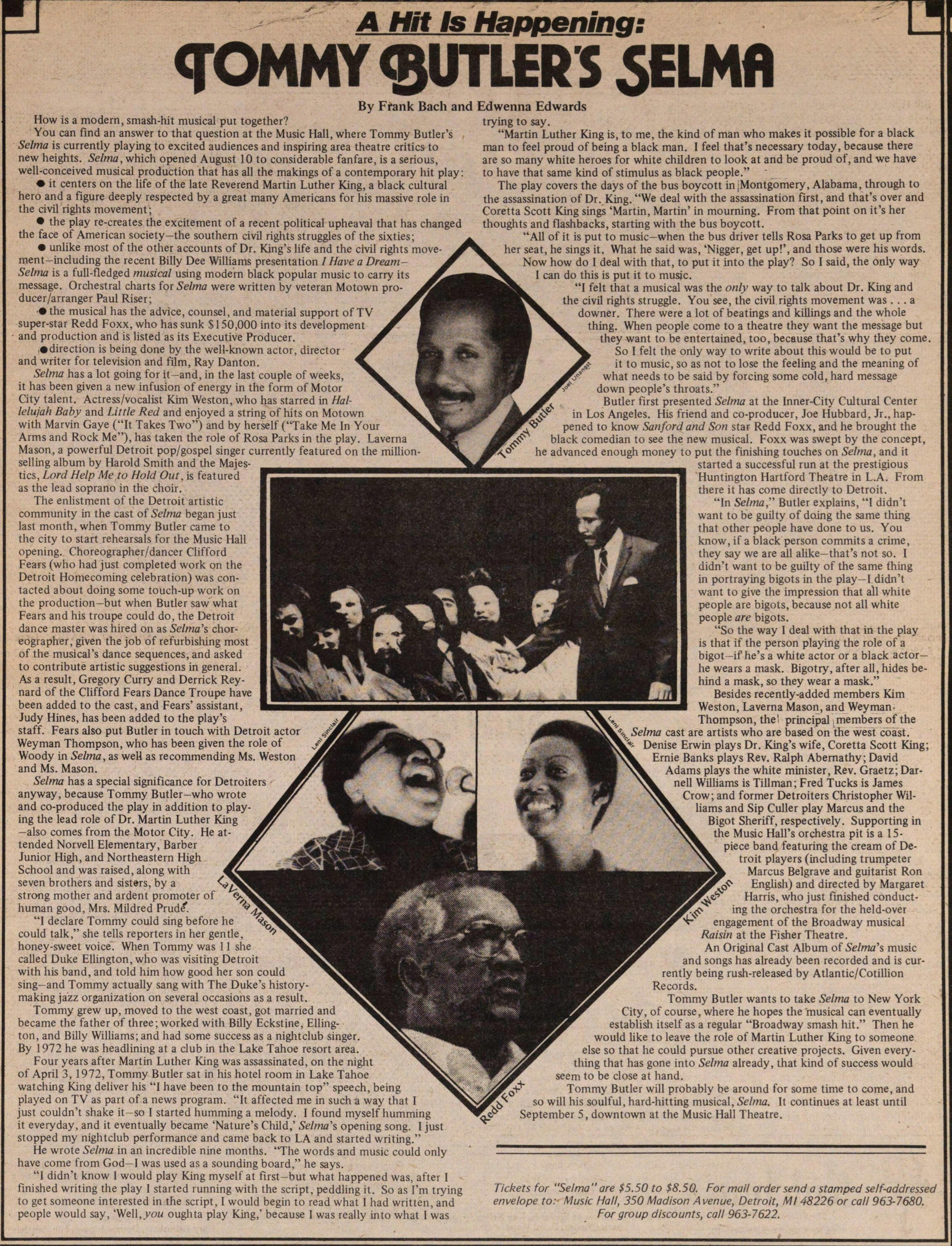 How is a modern, smash-hit musical put together?

You can find an answer to that question at the Music Hall, where Tommy Butler's Selma is currently playing to excited audiences and inspiring area theatre critics to new heights. Selma, which opened August 10 to considerable fanfare, is a serious, well-conceived musical production that has all the makings of a contemporary hit play:

Selma has a lot going for it - and, in the last couple of weeks, it has been given a new infusion of energy in the form of Motor City talent. Actress/vocalist Kim Weston, who has starred in Hallelujah Baby and Little Red and enjoyed a string of hits on Motown with Marvin Gaye ("It Takes Two") and by herself ("Take Me In Your Arms and Rock Me"), has taken the role of Rosa Parks in the play. Laverna Mason, a powerful Detroit pop/gospel singer currently featured on the million-selling album by Harold Smith and the Majestics, Lord Help Me to Hold Out, is featured as the lead soprano in the choir.

The enlistment of the Detroit artistic community in the cast of Selma began just last month, when Tommy Butler came to the city to start rehearsals for the Music Hall opening. Choreographer/dancer Clifford Fears (who had just completed work on the Detroit Homecoming celebration) was contacted about doing some touch-up work on the production - but when Butler saw what Fears and his troupe could do, the Detroit dance master was hired on as Selma's choreographer, given the job of refurbishing most of the musical's dance sequences, and asked to contribute artistic suggestions in general. As a result, Gregory Curry and Derrick Reynard of the Clifford Fears Dance Troupe have been added to the cast, and Fears' assistant, Judy Hines, has been added to the play's staff. Fears also put Butler in touch with Detroit actor Weyman Thompson, who has been given the role of Woody in Selma, as well as recommending Ms. Weston and Ms. Mason.

Selma has a special significance for Detroiters anyway, because Tommy Butler - who wrote and co-produced the play in addition to playing the lead role of Dr. Martin Luther King - also comes from the Motor City. He attended Norvell Elementary, Barber Junior High, and Northeastern High School and was raised, along with seven brothers and sisters, by a strong mother and ardent promoter of human good, Mrs. Mildred Prude.

"I declare Tommy could sing before he could talk," she tells reporters in her gentle, honey-sweet voice. When Tommy was 11 she called Duke Ellington, who was visiting Detroit with his band, and told him how good her son could sing - and Tommy actually sang with The Duke's history-making jazz organization on several occasions as a result.

Tommy grew up, moved to the west coast, got married and became the father of three; worked with Billy Eckstine, Ellington, and Billy Williams; and had some success as a nightclub singer. By 1972 he was headlining at a club in the Lake Tahoe resort area.

Four years after Martin Luther King was assassinated, on the night of April 3, 1972, Tommy Butler sat in his hotel room in Lake Tahoe watching King deliver his "I have been to the mountain top" speech, being played on TV as part of a news program. "It affected me in such a way that I just couldn't shake it - so I started humming a melody. I found myself humming it everyday, and it eventually became 'Nature's Child,' Selma's opening song. I just stopped my nightclub performance and came back to LA and started writing."

He wrote Selma in an incredible nine months. "The words and music could only have come from God - I was used as a sounding board," he says.

"I didn't know I would play King myself at first - but what happened was, after I finished writing the play I started running with the script, peddling it. So as I'm trying to get someone interested in the script, I would begin to read what I had written, and people would say, 'Well, you oughta play King,' because I was really into what I was trying to say.

"Martin Luther King is, to me, the kind of man who makes it possible for a black man to feel proud of being a black man. I feel that's necessary today, because there are so many white heroes for white children to look at and be proud of, and we have to have that same kind of stimulus as black people."

"All of it is put to music - when the bus driver tells Rosa Parks to get up from her seat, he sings it. What he said was, 'Nigger, get up!', and those were his words. Now how do I deal with that, to put it into the play? So I said, the only way I can do this is put it to music.

"I felt that a musical was the only way to talk about Dr. King and the civil rights struggle. You see, the civil rights movement was...a downer. There were a lot of beatings and killings and the whole thing. When people come to a theatre they want the message but they want to be entertained, too, because that's why they come. So I felt the only way to write about this would be to put it to music, so as not to lose the feeling and the meaning of what needs to be said by forcing some cold, hard message down people's throats."

Butler first presented Selma at the Inner-City Cultural Center in Los Angeles. His friend and co-producer, Joe Hubbard, Jr., happened to know Sanford and Son star Redd Foxx, and he brought the black comedian to see the new musical. Foxx was swept by the concept, he advanced enough money to put the finishing touches on Selma, and it started a successful run at the prestigious Huntington Hartford Theatre in L.A. From there it has come directly to Detroit.

"So the way I deal with that in the play is that if the person playing the role of a bigot - if he's a white actor or a black actor - he wears a mask. Bigotry, after all, hides behind a mask, so they wear a mask."

An Original Cast Album of Selma's music and songs has already been recorded and is currently being rush-released by Atlantic/Cotillion Records.

Tommy Butler wants to take Selma to New York City, of course, where he hopes the musical can eventually establish itself as a regular "Broadway smash hit." Then he would like to leave the role of Martin Luther King to someone else so that he could pursue other creative projects. Given everything that has gone into Selma already, that kind of success would seem to be close at hand.

Tommy Butler will probably be around for some time to come, and so will his soulful, hard-hitting musical, Selma. It continues at least until September 5, downtown at the Music Hall Theatre.