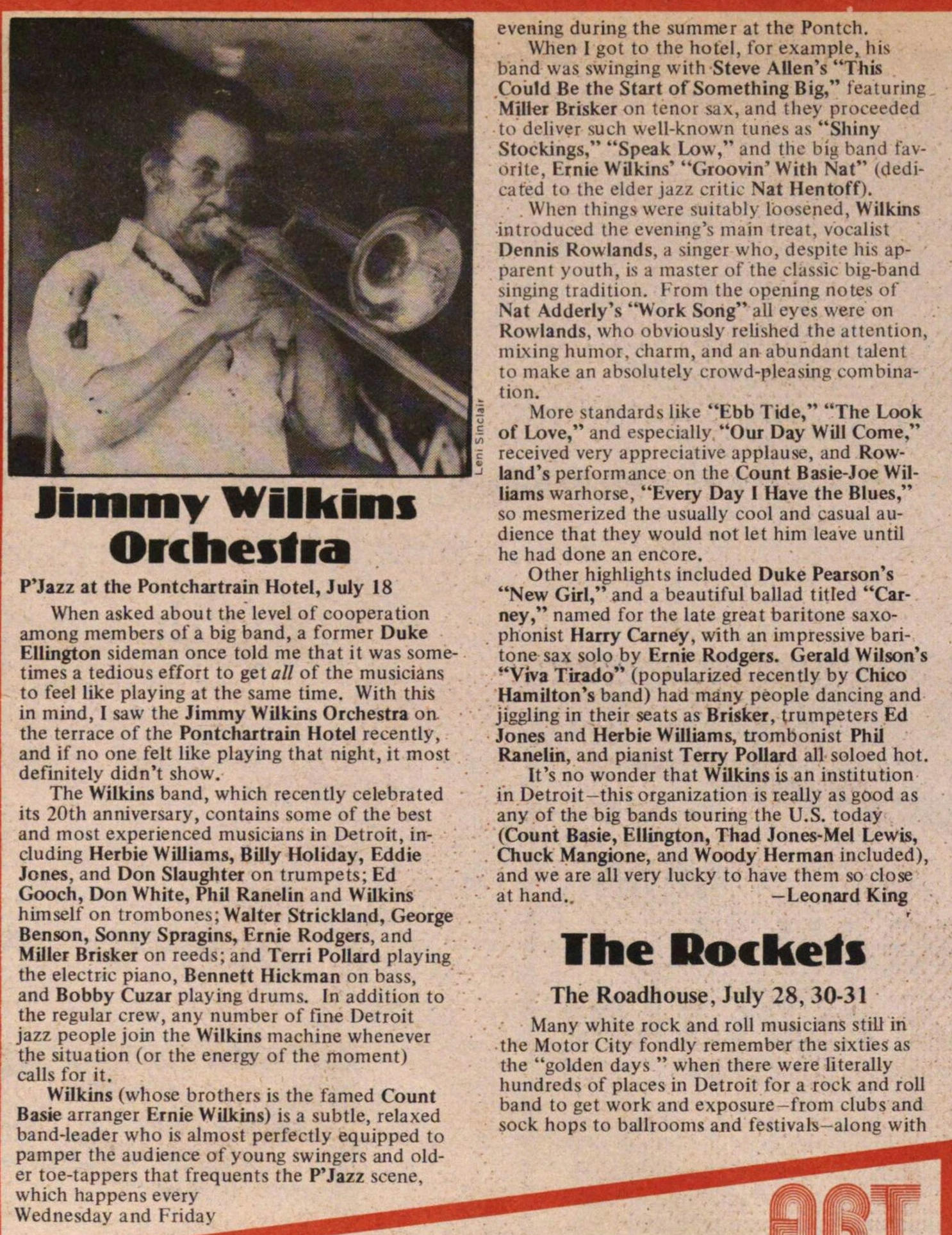 P'Jazz at the Pontchartrain Hotel, July 18

When asked about the level of cooperation among members of a big band, a former Duke EIllington sideman once told me that it was sometimes a tedious effort to get all of the musicians to feel like playing at the same time. With this in mind, I saw the Jimmy Wilkins Orchestra on the terrace of the Pontchartrain Hotel recently, and if no one felt like playing that night, it most definitely didn't show.

The Wilkins band, which recently celebrated its 20th anniversary, contains some of the best and most experienced musicians in Detroit, including Herbie Williams, Billy Holiday, Eddie Jones, and Don Slaughter on trumpets; Ed Gooch, Don White, Phil Ranelin and Wilkins himself on trombones; Walter Strickland, George Benson, Sonny Spragins, Ernie Rodgers, and Miller Brisker on reeds; and Terri Pollard playing the electric piano, Bennett Hickman on bass, and Bobby Cuzar playing drums. In addition to the regular crew, any number of fine Detroit jazz people join the Wilkins machine whenever the situation (or the energy of the moment) calls for it.

Wilkins (whose brothers is the famed Count Basie arranger Ernie Wilkins) is a subtle, relaxed band-leader who is almost perfectly equipped to pamper the audience of young swingers and older toe-tappers that frequents the P'Jazz scene, which happens every Wednesday and Friday evening during the summer at the Pontch.

When I got to the hotel, for example, his band was swinging with Steve Allen's "This Could Be the Start of Something Big," featuring Miller Brisker on tenor sax, and they proceeded to deliver such well-known tunes as "Shiny Stockings," "Speak Low," and the big band favorite, Ernie Wilkins' "Groovin' With Nat" (dedicated to the eider jazz critic Nat Hentoff).

When things were suitably Ioosened, Wilkins introduced the evening's main treat, vocalist Dennis Rowlands. a singer who, despite his apparent youth, is a master of the classic bip-band singing tradition. From the opening notes of Nat Adderly's "Work Song" all eyes were on Rowlands, who obviously relished the attention, mixing humor, charm, and an abundant talent to make an absolutely crowd-pleasing combination.

More standards like "Ebb Tide," "The Look of Love," and especially "Our Day Will Come," received very appreciative applause, and Rowland's performance on the Count Basie-Joe Williams warhorse, "Every Day I Have the Blues," so mesmerized the usually cool and casual audience that they would not let him leave until he had done an encore.

It's no wonder that Wilkins is an institution in Detroit–this organization is really as good as any of the big bands touring the U.S. today (Count Basie, Ellington, Thad Jones-Mel Lewis, Chuck Mangione, and Woody Herman included), and we are all very lucky to have them so close at hand.