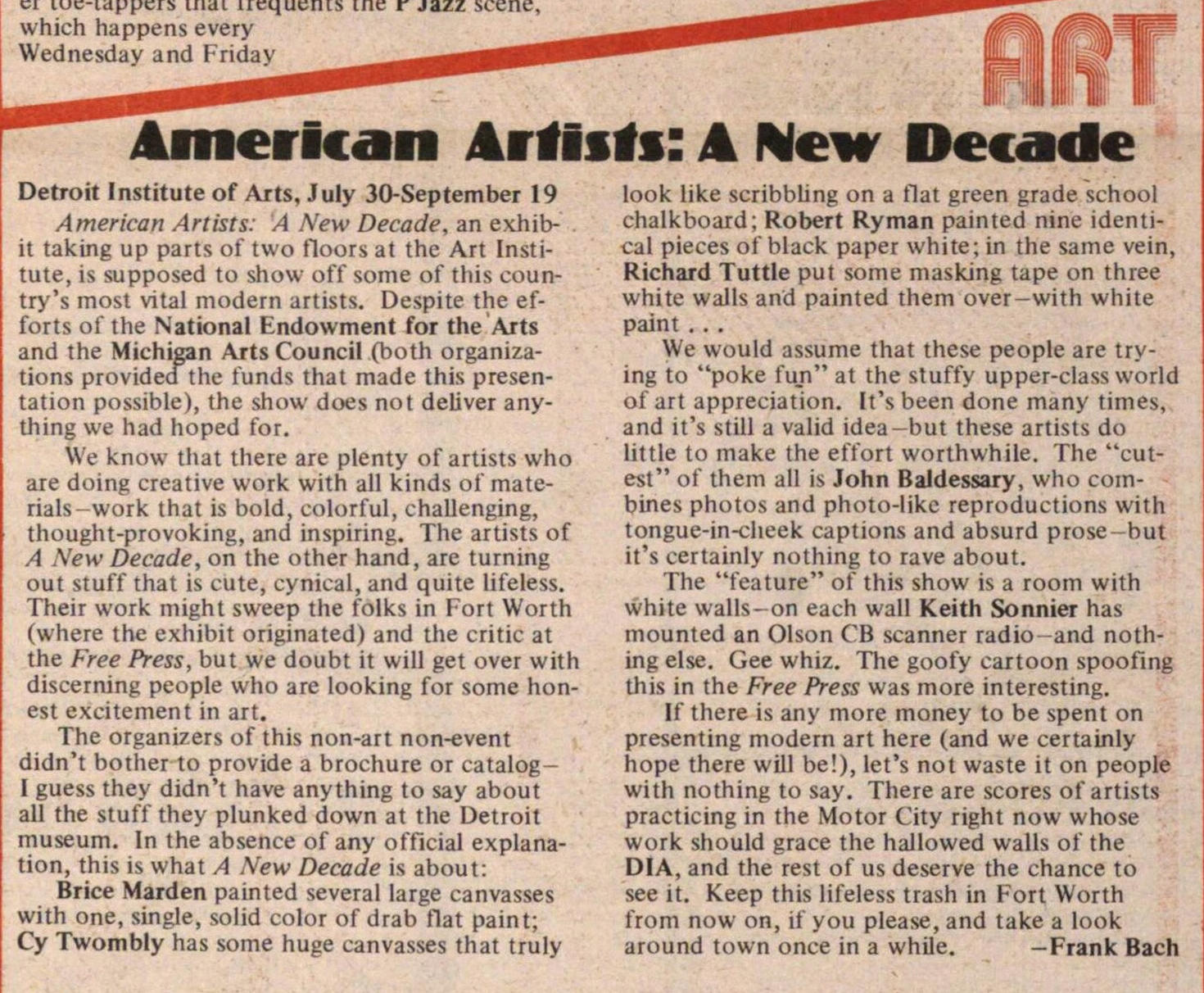 American Artists: A New Decade, an exhibit taking up parts of two floors at the Art Institute, is supposed to show off some of this country's most vital modern artists. Despite the efforts of the National Endowment for the Arts and the Michigan Arts Council (both organizations provided the funds that made this presentation possible), the show does not deliver anything we had hoped for.

We know that there are plenty of artists who are doing creative work with all kinds of materials-work that is bold, colorful, challenging, thought-provoking, and inspiring. The artists of A New Decade, on the other hand, are turning out stuff that is cute, cynical, and quite lifeless. Their work might sweep the folks in Fort Worth (where the exhibit originated) and the critic at the Free Press, but we doubt it will get over with discerning people who are looking for some honest excitement in art.

The organizers of this non-art non-event didn't bother to provide a brochure or catalog–I guess they didn't have anything to say about all the stuff they plunked down at the Detroit museum. In the absence of any official explanation, this is what A New Decade is about:

We would assume that these people are trying to "poke fun" at the stuffy upper-class world of art appreciation. It's been done many times, and it's still a valid idea–but these artists do little to make the effort worthwhile. The "cutest" of them all is John Baldessary, who combines photos and photo-like reproductions with tongue-in-cheek captions and absurd prose-but it's certainly nothing to rave about.

The "feature" of this show is a room with white walls-on each wall Keith Sonnier has mounted an Olson CB scanner radio-and nothing else. Gee whiz. The goofy cartoon spoofing this in the Free Press was more interesting.

If there is any more money to be spent on presenting modern art here (and we certainly hope there will be!), let's not waste it on people with nothing to say. There are scores of artists practicing in the Motor City right now whose work should grace the hallowed walls of the DIA, and the rest of us deserve the chance to see it. Keep this lifeless trash in Fort Worth from now on, if you please. and take a look around town once in a while.