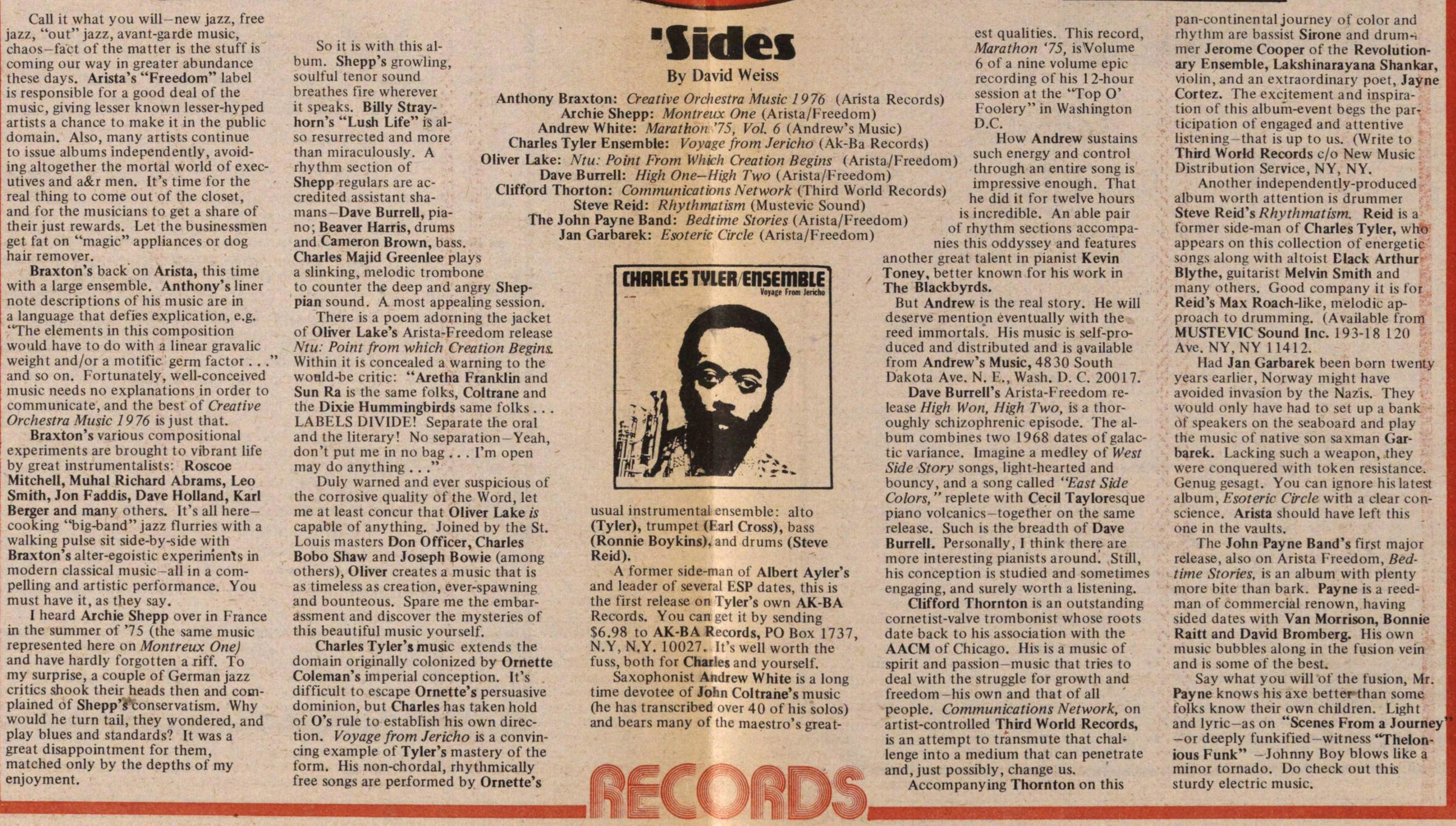 Call it what you will-new jazz, free jazz, "out" jazz, avant-garde music, chaos-fact of the matter is the stuff is coming our way in greater abundance these days. Arista's "Freedom" label is responsible for a good deal of the music, giving lesser known lesser-hyped artists a chance to make it in the public domain. Also, many artists continue to issue albums independently, avoiding altogether the mortal world of executives and a&r men. It's time for the real thing to come out of the closet, and for the musicians to get a share of their just rewards. Let the businessmen get fat on "magic" appliances or dog hair remover.

Braxton's back on Arista, this time with a large ensemble. Anthony's liner note descriptions of his music are in a language that defies explication, e.g. "The elements in this composition would have to do with a linear gravalic weight and/or a motific germ factor . . ." and so on. Fortunately, well-conceived music needs no explanations in order to communicate, and the best of Creative Orchestra Music 1976 is just that.

Braxton's various compositional experiments are brought to vibrant life by great instrumentalists: Roscoe Mitchell, Muhal Richard Abrams, Leo Smith, Jon Faddis, Dave Holland, Karl Berger and many others. It's all here–cooking "big-band" jazz flurries with a walking pulse sit side-by-side with Braxton's alter-egoistic experiments in modern classical music–all in a compelling and artistic performance. You must have it, as they say.

I heard Archie Shepp over in France in the summer of '75 (the same music represented here on Montreux One) and have hardly forgotten a riff. To my surprise, a couple of German jazz critics shook their heads then and complained of Shepp's conservatism. Why would he turn tail, they wondered, and play blues and standards? It was a great disappointment for them, matched only by the depths of my enjoyment.

So it is with this album. Shepp's growling, soulful tenor sound breathes fire wherever it speaks. Billy Strayhorn's "Lush Life" is also resurrected and more than miraculously. A rhythm section of Shepp regulars are accredited assistant shamans–Dave Burrell, piano; Beaver Harris, drums and Cameron Brown, bass. Charles Majid Greenlee plays a slinking, melodic trombone to counter the deep and angry Sheppian sound. A most appealing session.

There is a poem adorning the jacket of Oliver Lake's Arista-Freedom release Ntu: Point from which Creation Begins. Within it is concealed a warning to the would-be critic: "Aretha Franklin and Sun Ra is the same folks, Coltrane and the Dixie Hummingbirds same folks . . . LABELS DIVIDE! Separate the oral and the literary! No separation-Yeah, don't put me in no bag . . . I'm open may do anything . . ."

Duly warned and ever suspicious of the corrosive quality of the Word, let me at least concur that Oliver Lake is capable of anything. Joined by the St. Louis masters Don Officer, Charles Bobo Shaw and Joseph Bowie (among others), Oliver creates a music that is as timeless as creation, ever-spawning and bounteous. Spare me the embarassment and discover the mysteries of this beautiful music yourself.

Saxophonist Andrew White is a long time devotee of John Coltrahe's music (he has transcribed over 40 of his solos) and bears many of the maestro's greatest qualities. This record, Marathon '75, is Volume 6 of a nine volume epic recording of his 12-hour session at the 'Top O' Foolery" in Washington D.C.

How Andrew sustains such energy and control through an en tire song is impressive enough. That he did it tor twelve hours is incredible. An able pair of rhythm sections accompanies this oddyssey and features another great talent in pianist Kevin Toney, better known for his work in The Blackbyrds.

But Andrew is the real story. He will deserve mention eventually with the reed immortals. His music is self-produced and distributed and is available from Andrew's Music, 4830 South Dakota Ave. N. l.., Wash. D. C. 20017.

Dave Burrell's Arista-Freedom release High Won, High Two, is a thoroughly schizophrenic episode. The album combines two 1968 dates of galactic variance. Imagine a medley of West Side Story songs, light-hearted and bouncy, and a song called "East Side Colors," replete with Cecil Tayloresque piano volcanics-together on the same release. Such is the breadth of Dave Burrell. Personally, I think there are more interesting pianists around. Still, his conception is studied and sometimes engaging, and surely worth a listening.

Clifford Thornton is an outstanding cornetist-valve trombonist whose roots date back to his association with the AACM of Chicago. His is a music of spirit and passion-music that tries to deal with the struggle for growth and freedom–his own and that of all people. Communications Network, on artist-controlled Third World Records, is an attempt to transmute that challenge into a medium that can penetrate and, just possibly, change us.

Accompanying Thornton on this pan-continental journey of color and rhythm are bassist Sirone and drummer Jerome Cooper of the Revolutionary Ensemble, Lakshinarayana Shankar, violin, and an extraordinary poet, Jayne Cortez. The excitement and inspiration of this album-event begs the participation of engaged and attentive listening-that is up to us. (Write to Third World Records c/o New Music Distribution Service, NY, NY.

Another independently-produced album worth attention is drummer Steve Reid's Rhythmatism. Reid is a former side-man of Charles Tyler, who appears on this collection of energetic songs along with altoist Clack Arthur Blythe, guitarist Meivin Smith and many others. Good company it is tor Reid's Max Roach-like, melodic approach to drumming. (Available trom MUSTEVIC Sound Inc. 1 93-18 120 Ave. NY, NY 11412.

Had Jan Garbarek been born twenty years earlier, Norway might have avoided invasion by the Nazis. They would only have had to set up a bank of speakers on the seaboard and play the music of native son saxman Garbarek. Lacking such a weapon, they were conquered with token resistance. Genug gesagt. You can ignore his latest album, Esoteric Circle with a clear conscience. Arista should have left this one in the vaults.

The John Payne Band's first major release, also on Arista Freedom, Bedtime Stories, is an album with plenty more bite than bark. Payne is a reedman of commercial renown, having sided dates with Van Morrison, Bonnie Raitt and David Bromberg. His own music bubbles along in the fusion vein and is some of the best.

Say what you will of the fusion, Mr. Payne knows his axe better than some folks know their own children. Light and lyric–as on "Scenes From a Journey–or deeply funkified–witness "Thelonious Funk" –Johnny Boy blows like a minor tornado. Do check out this sturdy electric music.