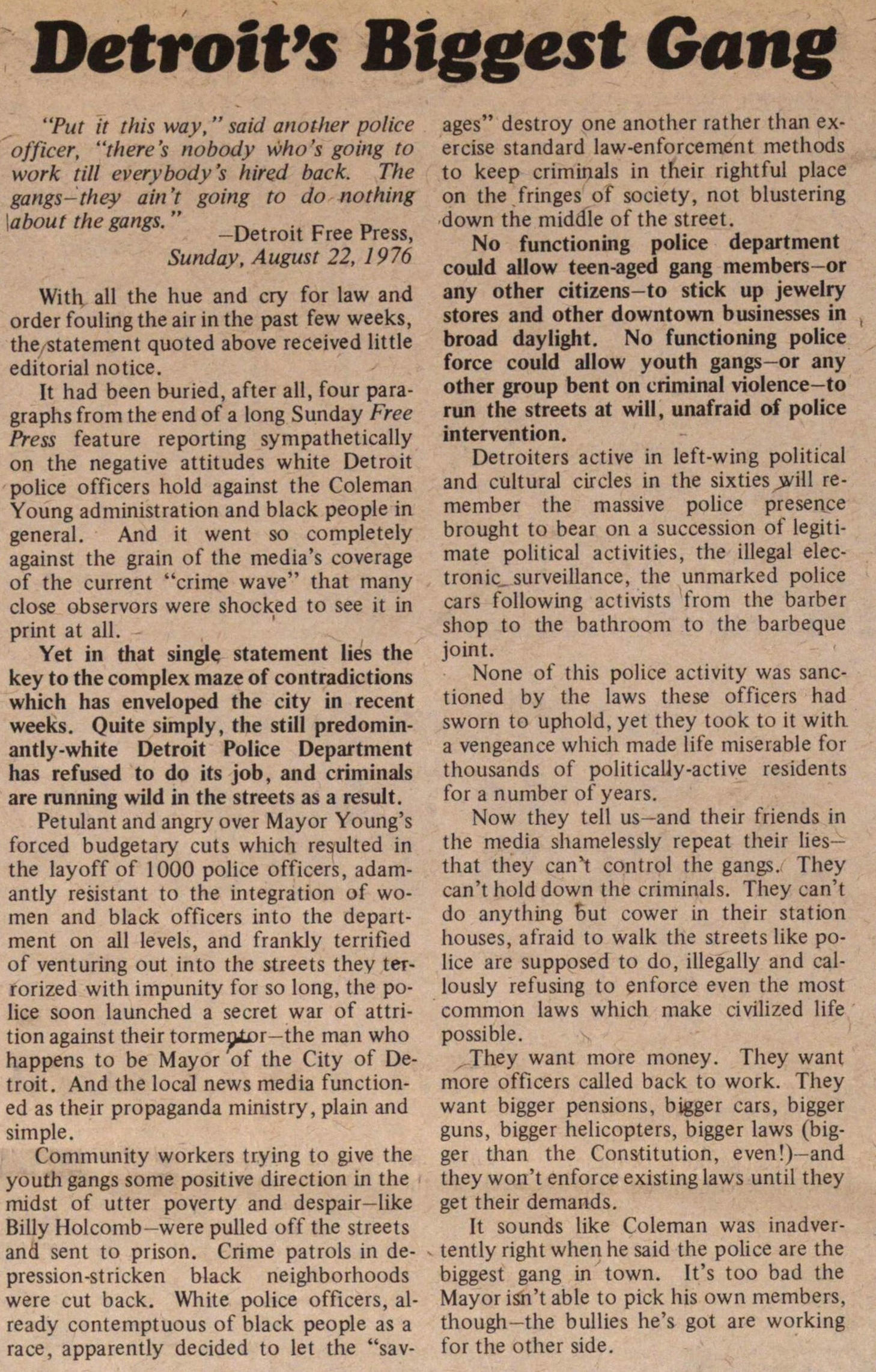 "Put it this way, " said anotlier pólice officer, "there's nobody who's going to work til! everybody's hired back. The gangs-they ain't going to do nothing aboutthegangs." _Detroit Free Press Sunday, August 22, 1976 With all the hue and cty for law and order fouling the air in the past few weeks, the statement quoted above received little editorial notice. It had been buried, after all, four paragraphs from the end of a long Sunday Free Press feature reporting sympathetically on the negative attitudes white Detroit pólice officers hold against the Coleman Young administration and black people in general. And it went so completely against the grain of the media's coverage of the current "crime wave" that many close observors were shocked to see it in print at all. Yet in that single statement lies the key to the complex maze of contradictions which has enveloped the city in recent weeks. Quite simply, the still predominantly-white Detroit Pólice Department has refused to do its job, and crimináis are running wild in the streets as a result. Petulant and angry over Mayor Young's forced budgetary cuts which resulted in the layoff of 1000 pólice officers, adamantly resistant to the integration of women and black officers into the department on all levéis, and frankly terrified of venturing out into the streets they terrorized with impunity for so long, the police soon launched a secret war of attrition against their tormeptor-the man who happens to be Mayor of the City of Detroit. And the local news media functioned as their propaganda ministry, plain and simple. Community workers trying to give the youth gangs some positive direction in the midst of utter poverty and despair- like Billy Holcomb-were pulled off the streets and sent to prison. Crime patrols in depression-st rieken black neighborhoods were cut back. White pólice officers, already contemptuous of black people as a race, apparently decided to let the ages" destroy one another rather than exercise standard law-enforcement methods to keep crimináis in their rightful place on the fringes of society, not blustering down the niiddle of the street. No functioning pólice department could allow teen-aged gang members-or any other citizens-to stick up jewelry stores and other downtown businesses in broad daylight. No functioning pólice forcé could allow youth gangs-or any other group bent on criminal violence- to run the streets at will, unafraid of pólice intervention. Detroiters active n left-wing political and cultural circles in the sixties jvill remember the massive pólice presence brought to bear on a succession of legitímate political activities, the Ilegal electronic. surveillance, the unmarked pólice cars following activists from the barber shop to the bathroom to the barbeque joint. None of tliis pólice activity was sanctioned by the laws these officers had sworn to uphold, yet they took to it with. a vengeance which made life miserable for thousands of politically-active residents for a number of years. Now they tell us- and their friends in the media shamelessly repeat their lies- that they cant control the gangs. They can't hold down the crimináis. They can't do anything But cower in their station houses, afraid to walk the streets like pólice are supposed to do, illegally and callously refusing to enforce even the most common laws which make civilized life possible. , They want more money. They want more officers called back to work. They want bigger pensions, bigger cars, bigger guns, bigger helicopters, bigger laws (bigger than the Constitution, even!)- and they won't enforce existing laws until they get their demands. It sounds like Coleman was inadver. tently right when he said the pólice are the biggest gang in town. It's too bad the Mayor isn't able to pick his own members, though- the bullies he's got are working for the other side.