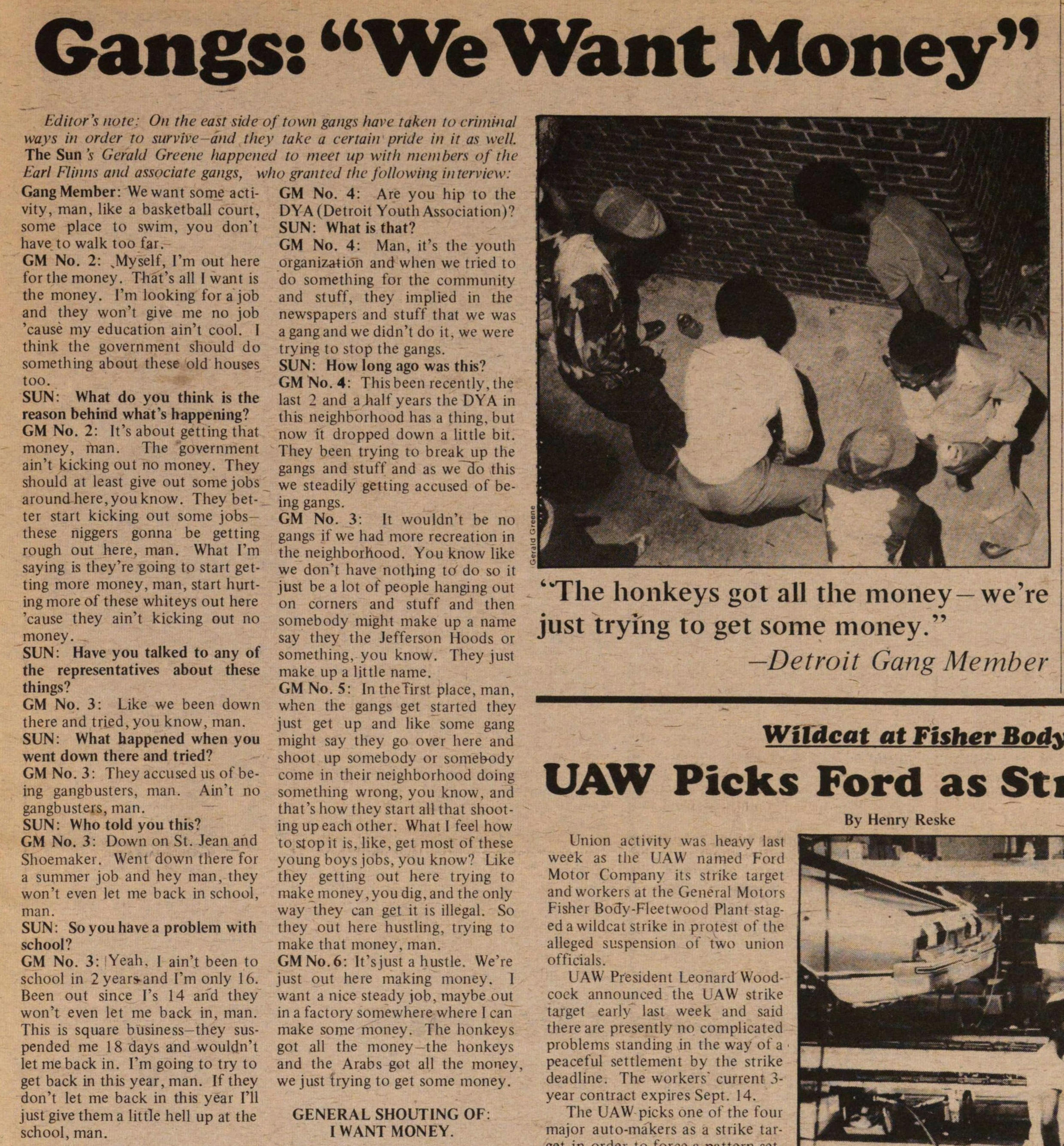 Editoras note: On the east side oftown gangs have taken to criminal wars in order to sur vive and tlicy take a certain pride in ir as wil. The Sun 's Gefakl Greene happened to meet up with memben of the Earl Flinns and associatc gangs, wlw granted the following interview: GangMember: We want some activity, man, like a basketball court, some place to swim, you don't have to walk too far. GM No. 2: .Myself, ['m out here for the money . That's all I want is the money. I'm looking for a job and they won't give me no job 'causè my education ain't cool. I think the government sliould do something about these old houses too. SUN: What do you think is the reason behind what's happening? GM No. 2: It's about getting that money, man. The government ain't kicking out no money. They should at least give out some jobs around here, you know. They better start kicking out some jobsthese niggers gonna be getting rough out here. man. What I'm saying is they're going to start getting more money, man, start hurting more of these whiteys out here 'cause they ain't kicking out no money. . SUN: Have you talked to any of the representatives about these things? GM No. 3: Like we been down there and tried,you know, man. SUN: What bappened when you went down there and tried? GM No. 3: They accused us of being gangbusters, man. Ain't no gangbusters, man. SUN: Who told you this? GM No. 3: Down on St. Jean and Shoemaker. Went down there for a summer job and hey man, they won't even let me back in school, man. SUN : So you have a problem with school? GM No. 3: Yeah. 1 ain't been to school in 2yearand ['m only 16. Been out since I's 14 and they won't even let me back in, man. This is square business-they suspended me 18 days and wouldn't let me back in. I'm going to try to get back in this year, man. If they don't let me back in this year I'll just give them a little heil up at the school, man. GM No. 4: Are you hip to the DYA (Detroit Youth Association)? SUN: Whatisthat? GM No. 4: Man, it's the youth organizaron and wlien we tried to do something for the community and stuff, they implied in the newspapers and stuff that we was a gang and we didn't do it. we were trying to stop the gangs. SUN: How long ago was this? GM No. 4: This been recently. the last 2 and a half years the DYA in lilis neighborhood has a thing, but now ít dropped down a little bit. They been trying to break up the gangs and stuff and as we3o this we steadily getting accused of being gangs. GM No. 3: It wouldn't be no gangs if we had more recreation in the neighborhood. You know like we don't have nothing to" do so it just be a lot of people hanging out on corners and stuff and then somebody might make up a name say they the Jefferson Hoods or something, you know. They just make up a little name. GM No. 5: In theTirst place, man, when the gangs get started they just get up and like some gang might say they go over here and shoot up somebody or somebody come in their neighborhood doing something wrong, you know, and that's how they start all that shootingupeach other. What I feel how tostopit is. like, get most of these young boys jobs, you know? Like they getting out here trying to make rnoney , you dig, and the only way they can get it is Ilegal. So they out here hustling, trying to make that money, man. GMNo.6: It'sjust a hustle. We're just out here making money. 1 want a nice steady job, maybe out in a factory somewhere where I can make some money. The honkeys got all the money -the honkeys and the Arabs got all the money, we just trying to get some money. GENERAL SHOUT1NG OF: I WANT MONEY. The honkeys got all the money- we're just trying to get some money." -Detroit Gang Member