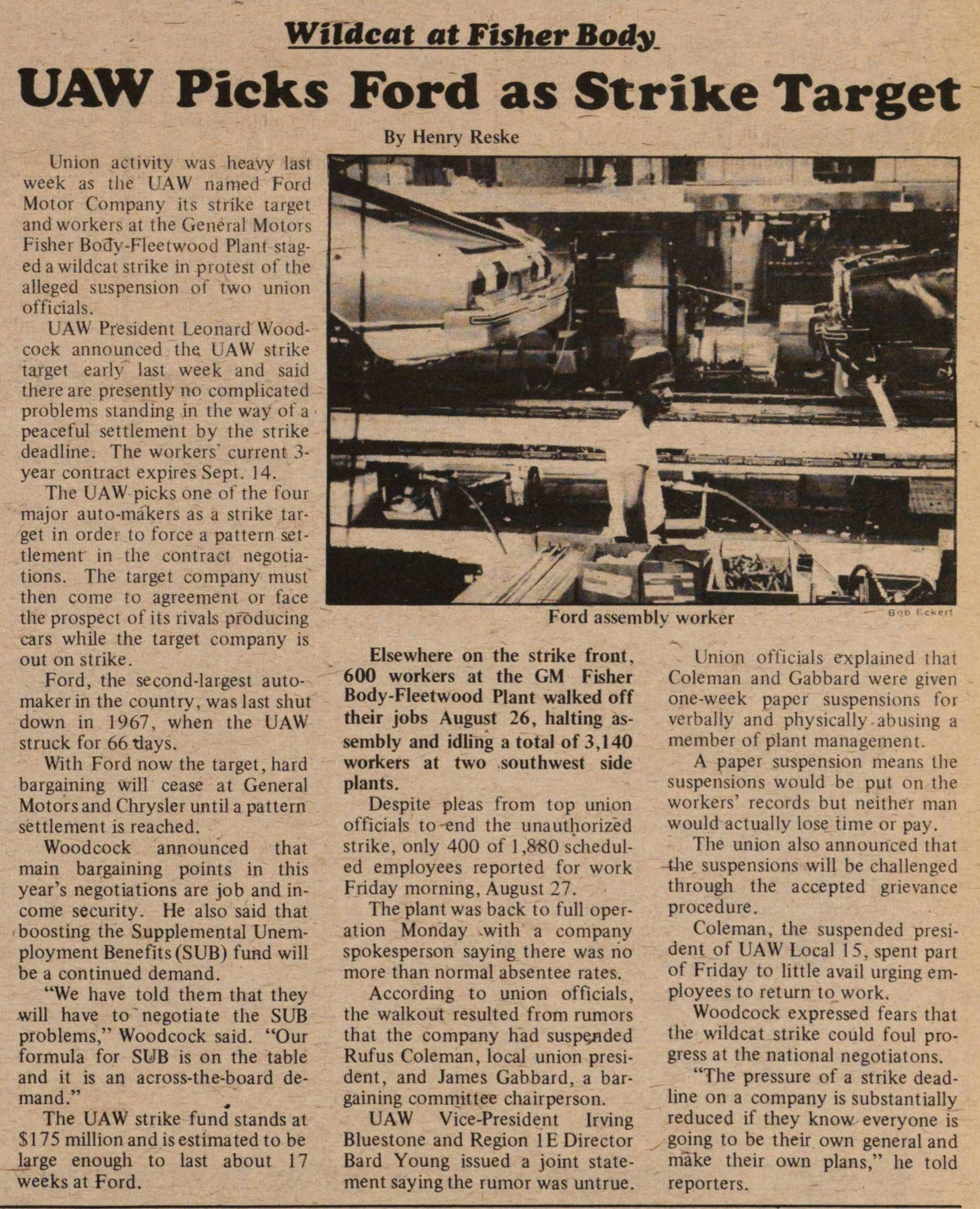 Union activïty was heavy last I week as the UAW named f-m! Molor Company its strike target and workers at the General Motors Fishei Bocly-Fleetwood Plant stagedawildcat strike in protest of the 1 alleged suspension of two unión I officials. UAW President Leonard I cock announced the UAW strike target early lasi week and said thereare presently no complicated problems standing in the way of a ■ I peaceful settlement by the strike deadline. The workers' current 3year contract expires Sept. 14. The UAW picks one of the fotn major auto-mákers as a strike I get in order to forcé a pattern I tlement in the contract negotiations. The target company must then come to agreement or face the prospect of its rivals pföducing cars whiJe the target company is out on strike. Ford, the second-largest automaker in the country, was last shut down in 1967, when the UAW struck for 66 tlays. With Ford now the target, hard bargaining will cease at General Motors and Chrysler until a pattern settlement is reached. Woodcock announced that main bargaining points in this year's negotiations are job and income security. He also said that boosting the Supplemental Unemployment Benefits (SUB) fund will be a continued demand. "We have told them that they will have tonegotiate the SUB problems," Woodcock said. "Our formula for SUB is on the table and it is an across-the-board demand." The UAW strike fund stands at S 1 75 million and is estima ted to be large enough to last about 17 weeks at Ford. Elsewhere on the strike front, 600 workers at the GM Fisher Body-Fleetwood Plant walked off their jobs August 26, halting assembly and idling a total of 3,140 workers at two southwest side plants. Despite pleas from top union officials to-end the unauthorizëd strike, only 400 of 1 ,80 scheduled employees reported for work Friday morning, August 27. The plant was back to full operation Monday with a company spokesperson saying there was rio more than normal absentee rates. According to union officials, the walkout resulted from rumors that the company had suspended Rufus Coleman, local union president, and James Gabbard, a bargaining committee chairperson. UAW Vice-President lrving Bluestone and Región 1 E Director Bard Young issued a joint statement saying the rumor was untrue. Union officials explained iliat Coleman and Gabbard were given one-week paper suspensions for verbally and physically abusing a member of plant management. A paper suspension means llie suspensions would be put on tbe workers' records but neither man would actually lose time or pay. The union also announced that -the suspensions will be challenged through the accepted grievance procedure. Coleman, the suspended president of UAW Local 15, spent part of Friday to little avail urging employees to return to work. Woodcock expressed fears that the wildcat strike could foul progress at the national negotiatons. "The pressure of a strike deadline on a company is substantially reduced if they know everyone is going to be their own general and make their own plans," he told reporters.