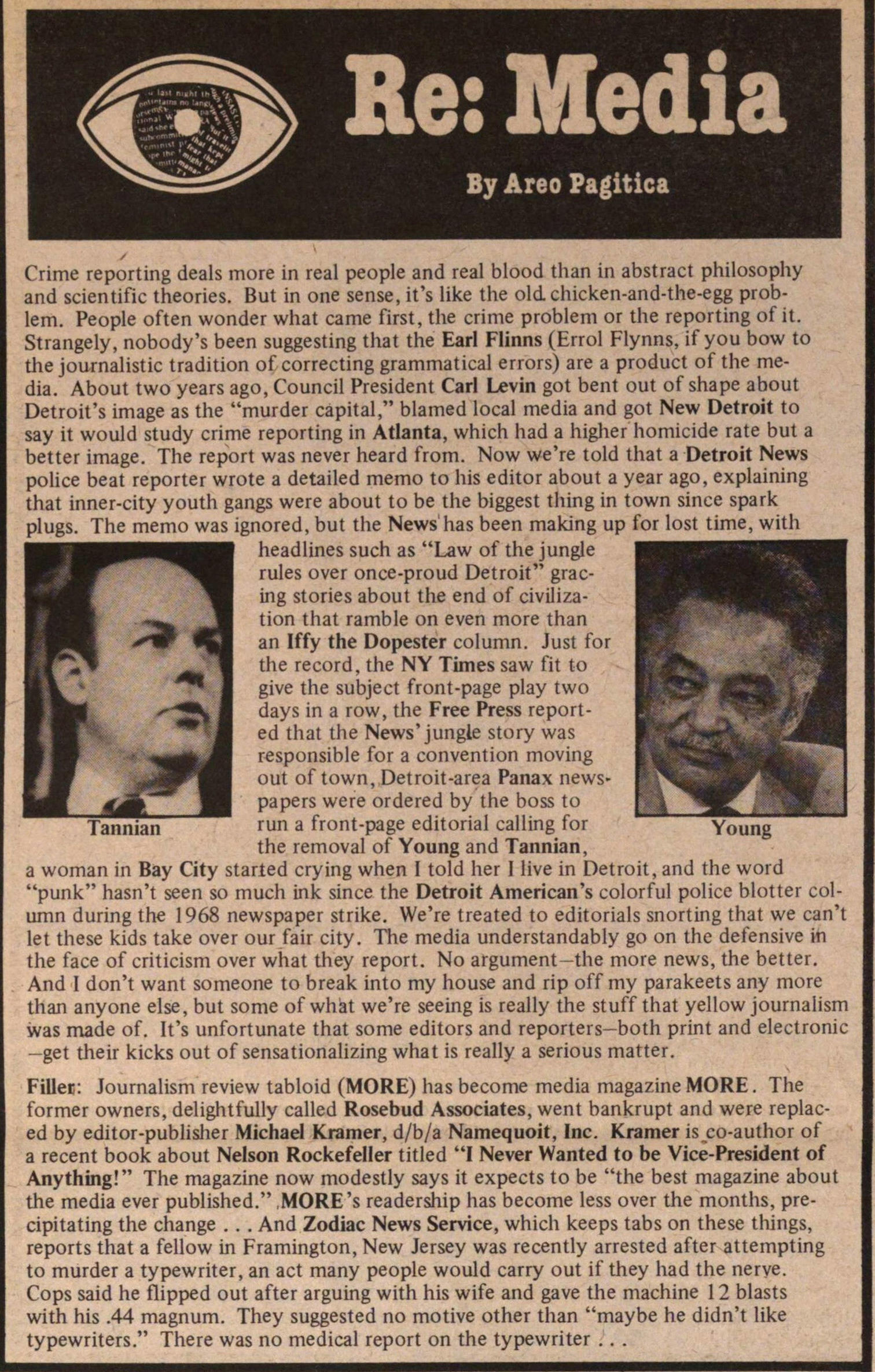 Crime reporting deals more in real people and real blood than in abstract philosophy and scientific theories. But in one sense, it's like the oldchicken-and-the-egg problem. People often wonder what came first, the crime problem or the reporting of it. Strangely, nobody's been suggesting that the Earl Flinns (Errol Flynns, if you bow to the journalistic tradition of correcting grammatical errors) are a product of the media. About two years ago, Council President Cari Levin got bent out of shape about Detroit's image as the "murder capital," blamed local media and got New Detroit to say it would study crime reporting in Atlanta, which had a higher homicide rate but a better image. The report was never heard from. Now we're told that a Detroit News pólice beat reporter wrote a detailed memo to his editor about a year ago, explaining that inner-city youth gangs were about to be the biggest thing in town since spark plugs. The memo was ignored, but the News has been making up for lost time, with headlines such as "Law of the jungle rules over once-proud Detroit" gracing stories about the end of civilization that ramble on even more than an Iffy the Dopester column. Just for the record, the NY Times saw fit to give the subject front-page play two days in a row, the Free Press reported that the News' jungle story was responsible for a convention moving out of town, Detroit-area Panax newspapers were ordered by the boss to run a front-page editorial calling for the removal of Young and Tannian, a woman in Bay City starled crying when I told her I live in Detroit, and the word "punk" hasn't seen so much ink since the Detroit American 's colorful pólice blotter column during the 1968 newspaper strike. We're treated to editorials snorting that we can't let these kids take over our fair city. The media understandably go on the defensive in the face of criticism over what they report. No argument- the more news, the better. And I don't want someone to break into my house and rip off my parakeets any more than anyone else, but some of whát we're seeing is really the stuff that yellow journalism ivas made of. It's unfortunate that some editors and reporters- both print and electronic - get their kicks out of sensationalizing what is really a serious matter. Filter: Journalism review tabloid (MORE) has become media magazine MORE. The former owners, delightfully called Rosebud Associates, went bankrupt and were replaced by editor-publisher Michael Kramer, dba Namequoit, Inc. Kramer is co-author of a recent book about Nelson Rockefeller titled "I Never Wanted to be Vice-President of Anything!" The magazine now modestly says it expects to be "the best magazine about the media ever published." .MORE 's readership has become less over the months, precipitating the change . . . And Zodiac News Service, which keeps tabs on these things, reports that a fellow in Framington, New Jersey was recently arrested after attempting to murder a typewriter, an act many people would carry out if they had the nerye. Cops said he flipped out after arguing with his wife and gave the machine 1 2 blasts with his .44 magnum. They suggested no motive other than "maybe he didn't like typewriters." There was no medical report on the typewriter . . .