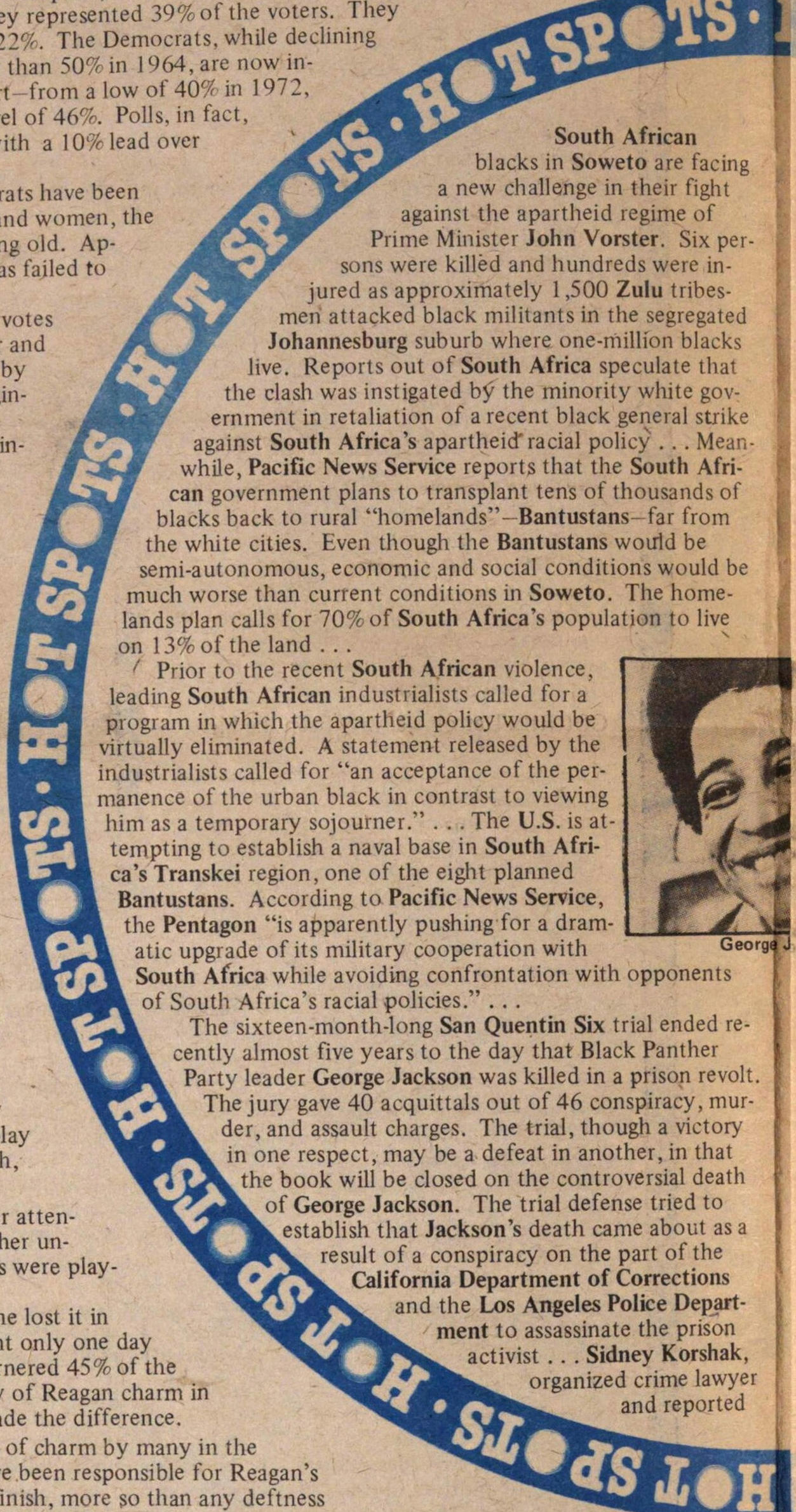 ]KkMF South African ÊCT blacks in Soweto are facing Ê r a new cliallenge in their fight Cr against the apartheid regime of WST ""me Minister John Vorster. Six perBJr Slllls were killed and hundreds were inM9r jured as approximately 1 ,500 Zulu tribes"r men attacked black militants in the segregated JLW Johannesburg suburb wliere one-niillion blacks Aw live. Repons out ot South África speculate that MW the clash was instigated by the minority white govJÊ Jat eminent in retaliation of a recent black general strike Fm against South África 's apartheid racial policy ... ■ JtJ while, Pacific News Service reports that the South AfriLJ can government plans to transplant tens of thousands of F jg blacks back to rural far from Ps# the white cities. Even though the Bantustans wouid be semi-autonomous, economie and social conditions would be f?" much worse than current conditions in Soweto. The homeÊtJ lands plan calis for 70% of South África 's population to live f on 1 3% of the land . . . fc J I Prior to the recent South Afncan violence, leading South African industrialists called for a Pfc program in which the apartheid policy would be f" g virtually eliminated. A statement released by the ■H industrialists called for "an acceptance of the perKH manence of the urban black in contrast to viewing ƒ B him as a temporary sojourner." . . . The U.S. is at■"-! tempting to establish a naval base in South AfriLJhA ca 's Transkei región, one of the eight planned k Bantustans. According to Pacific News Service, p-% the Pentagon "is apparently pushing for a dramÏY% atic upgrade of its military cooperation with %Tf South África while avoiding confrontation with opponents pP of South Africa's racial policies." . . . %vL The sixteen-month-long San Quentin Six trial ended rek cently almost five years to the day that Black Panther LJk Party leader George Jackson was killed in a prison revolt. P The jury gave 40 acquittals out of 46 conspiracy , murjflk der, and assault charges. The trial, though a victor' tP in one respect, may be a defeat in another, in that J ythe book will be closed on the controversial death jgjW of George Jackson. The trial defense tried to establish that Jackson's death came about as a J result of a conspiracy on the part of the ■ . California DeDartment of Corrections ♦ÜW and the Los Angeles Pólice DepartP. ment to assassinate the prison [ N activist . . . Sidney Korshak. # J organized crime lawyer . an( rePorteci tmL-ml vfc. lieir to the Meyer t. Lansky crime syndicate, EW is said to have had advance IrA. knowledge of the New York . Times series whicli outlined Korshak's 'J. relationship with the American intelliÍTk. gence community, organized crime and . tertainers. Democratie power broker Paul CW' Ziffren. long-time friend of Henry Kissinger, tL. arranged tor an attackon the Times' Seymour Hk Hersh in New West magazine. West coast observers V are also speculating that Korshak friend Lou %Vp man, head of the entertainment conglomérate Music # Corporation of America (MCA ), will appoint Kissinger bV to the vice-presidency of MCA after Kissinger finishes CA with the state department. And to further confuse Kor shak's ties to tlie rich and powerful, Korshak recently showed yLl up at a Jimmy Carter fund-raiser given by actor Warren Beatty. 1 Korshak also happens to be a lawyer for the Council of ■P" ifornia Growers and the Teamsters, two groups which are trying to defeat Proposition 14 on the California ballot this fall. Proposition 14 is a bilí whicli would allow the -fH California Agriculture Relations Board to lv tion without the purse strings approval of rur-al legislators, and thus give greater riglits tó farmworkers, much to the chagrin of the - H eis that be in California. Well apparently ■'"1 my Carter, according to the Los Angeles Times, J has called a representative of the Council of -f California Growers and said that he would ÊLj take no position on Proposition 14, leaving mÊ it ultimately to west coast power brokers. g S You can be sure that Korshak wasn't just mi 'M hustling drinks at Carfer's" fundraiser the week before. mw The Boston Globe commented on the great drought of tJ 1976 ... no.not the droueht which has left Encland with m: W. only an inch of rain in the past few months, but the Mw Great Marijuana Drought. Apparently high grade pot kï# is as scarce in Boston as it is in Detroit. Boston mariMÈ m juana merchants and watchers are speculating that a Wl partial reason for the drought is that marijuana is Tj at such a_peak demand that it is causing many jK jr sellers to hold out for the highest bidder on LW low-quality Mexican and domestic pot. The rX DHA's unconscionable vendetta against rEF ('aribbean and South American m.T juana-shipping networks probably Br lias something to do with it riv as well. L?Jr ■ ■ ■ v% Jackson