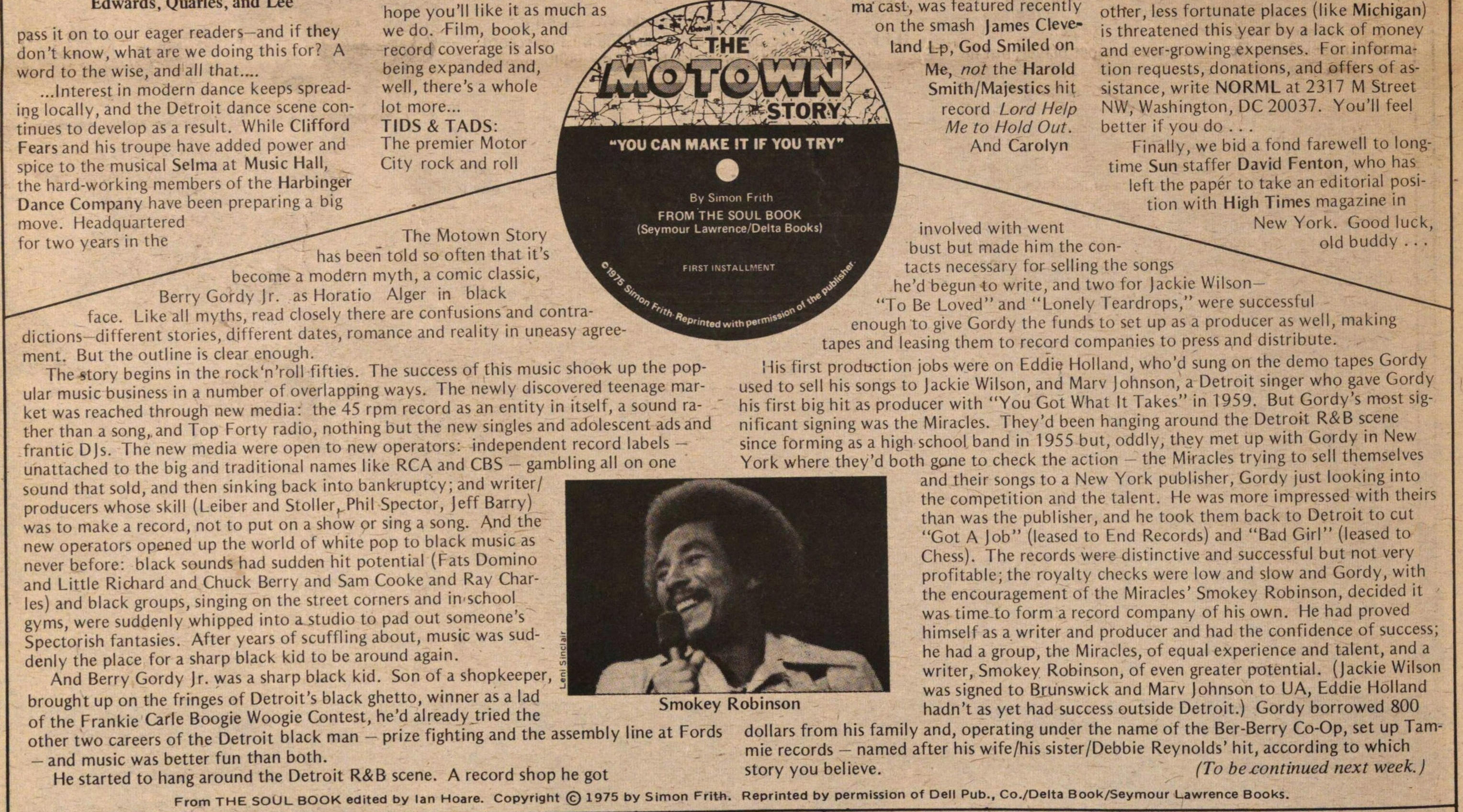 BWfpjfyWffiffffTlffa WÈËÈÈËÉÉm 2 mr The Motown Story has been told so otten that it s V - become a modern myth, a comic classic, " _--""" Berry Gordy )r. as Horatio Alger in black - ' face. Like all myths, read closely there are confusions'and contradictions-different stories, different dates, romance and reality n uneasy ment. But the outline is clear enough. The -story begins in the rock'n'roll fifties. The success of this music shook up the popular music business in a number of overlapping ways. The newly discovered teenage market was reached through new media: the 45 rpm record as an entity in itself, a sound rat-her than a song,. and Top Forty radio, nothing but the new singles and adolescent adsand frantic DJs. The new media were open to new operators: independent record labels - unattached to the big and traditional ñames like RCA and CBS - gambling all on one sound that sold, and then sinking back nto bankruptcy; and writer producers whose skill (Leiber and StollerPhil Spector, )eff Barry) was to make a record, not to put on a show or sing a song. And the new operators opened up the world of white pop to black music as never before: black sounds had sudden hit potential (Fats Domino and Little Richard and Chuck Berry and Sam Cooke and Ray Charles) and black groups, singing on the street corners and in'school gyms, were suddenly whipped nto a studio to pad out someone's Spectorish fantasies. After years of scuffling about, music was suddenly the place for a sharp black kid to be around again. And Berry Gordy Jr. was a sharp black kid. Son of a shopkeeper, brought up on the fringes of Detroit's black ghetto, winner as a lad of the Frankie Carie Boogie Woogie Contest, he'd already.tried the other two careers of the Detroit black man - prize fighting and the assembly line at Fords - and music was better fun than both. He started to hang around the Detroit R&B scène. A record shop he got ' nvolved with went bust but made him the con- tacts necessary for selling the songs he'd begun -to write, and two for Jackie Wilson- . 'To Be Loved" and "Lonely Teardrops," were successful -- - , enouehto eive Gordy the funds to set up as a producer as well, making tapes and leasing them to record companies to press and distribute. ! lis tïrst prodaction obs were on Eddie Holland, who'd sung on the demo tapes Gordy used to sell nis songs to Jackie Wilson, and Marv Johnson, a Detroit singer who gave Gordy his first big hit as producer with "You Got What It Takes" in 1959. But Gordy's most significant signing was the Miracles. They'd been hanging around the Detroit R&B scène since forming as a high school band in 1 955 but, oddly, they met up with Gordy in New York where they'd both gpjie to check the action - the Miracles trying to sell themselves and their songs to a New York publisher, Gordy just looking into the competition and the talent. He was more mpressed with theirs than was the publisher, and he took them back to Detroit to cut "Got A Job" (leased to End Records) and "Bad Girl" (leased to Chess). The records were distinctive and successful but not very profitable; the royalty checks were low and slow and Gordy, with the encouragement of the Miracles' Smokey Robinson, decided it was timeto form a record company of his own. He had proved himself as a writer and producer and had the confidence of success; he had a group, the Miracles, of equal experience and talent, and a writer, Smokey Robinson, of even greater potential. (Jackie Wilson was signed to Brunswick and Marv Johnson to UA, Eddie Holland hadn't as vet had success outside Detroit.) Gordy borrowed 800 dollars from his family and, operating under the name of the Ber-Berry Co-Op, set up lammie records - named after his wifehis sisterDebbie Reynolds' hit, according to which story you believe. (To be ontinued next week.) From THE SOUL BOOK edited by lan Hoare. Copyright O 1975 by Simon Frlth. Reprinted by permission of Dell Pub.. Co.Oelta BookSeymour Lawrence Books. '