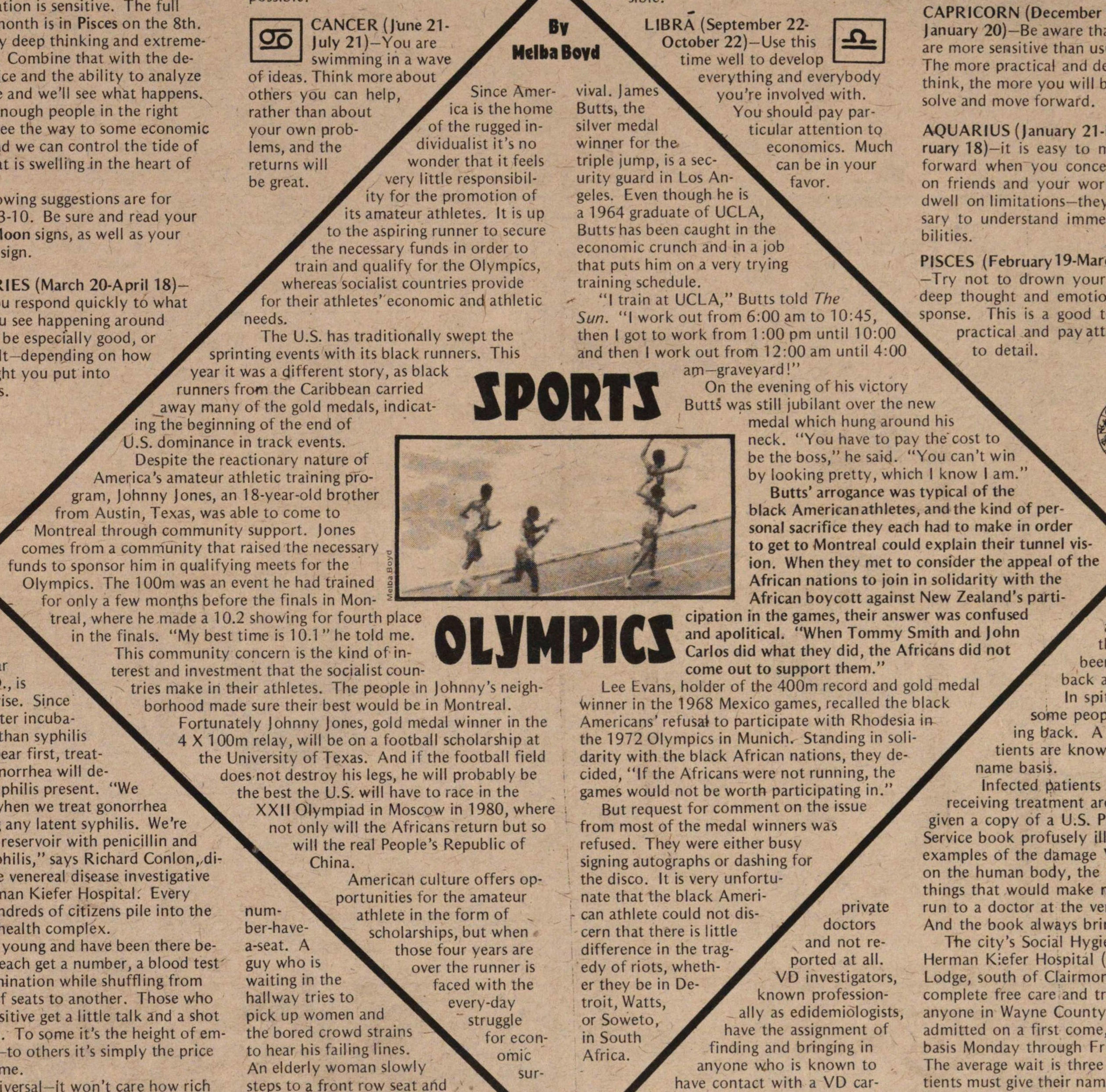 p Since AmerY ca s the home of the rugged p dividualist it's no T wonder that t feels r very little responsibility for the promotion of f its amateur athletes. It is up f to the aspiring runner to secure f tne necessary funds in order to T tra'n anc' qualify for the Olympics, F whereas socialist countries provide T for their athletes' economie and athletic r needs. T The U.S. has traditionally swept the y sprinting events with its black runners. This f year t was a different story, as black r runners from the Caribbean carried jiway many of the gold medals, f ing the beginning of the end of p U.S. dominance in track events. p Despite the reactionary nature of f America's amateur athletic training prop gram )ohnny Jones, an 18-year-old brother f from Austin, Texas, was able to come to S Montreal through community support. Jones comes from a community that raised the necessary funds to sponsor him in qualifying meets for the Olympics. The 100m was an event he had trained k for only a few months before the finals in treal, where he made a 1 0.2 showing for fourth place in the finals. "My best time is 10.1 " he told me. W This community concern is the kind of n terest and investment that the socialist tries make n their athletes. The people n Johnny's neighborhood made sure their best would be in Montreal. k Fortunately Johnny Jones, gold medal winner in the k 4 X 1 0Om relay, will be on a football scholarship at W the University of Texas. And f the football field does not destroy his legs, he will probably be the best the U.S. will have to race in the XXII Ölympiad in Moscow n 1980, where k not only will the Africans return but so will the real People's Republic of China. American culture offers portunities for the amateur athlete n the form of , W scholarships, but when those four years are over the runner s k faced with the every-day struggle for econk omic vival. ames Butts, the silver medal winner tor the. k triple jump, s a urity guard n Los geles. tven though he is k a 1964 gradúate of UCLA, Butts has been caught n the economie crunch and in a job that puts him on a very trying training schedule. "I train at UCLA," Butts told The k Sun. "I work out from 6:00 am to 10:45, then I got to work from 1 :00 pm until 1 0:00 and then I work out from 12:00 am until 4:00 arji- graveyard ! On the evening of his victory Butts was still jubilant over the new medal which hung around his neck. "You have to pay the'cost to be the boss," he said. "You can't win by looking pretty, which I know I am." Butts' arrogance was typical of the black Americanathletes, and the kind of personal sacrifice thev each had to make in order to get to Montreal could explain their tunnel vision. When they met to consider the appeal of the African nations to join in solidarity with the African boycott against New Zealand's A cipation n the games, their answer was confused and apolitical. "When Tommy Smith and John Carlos did what they did, the Africans did not come out to support them." M Lee Evans, holder of the 40Óm record and gold medal Winner n the 1968 Mexico games, recalled the black Americans' refusat to particípate with Rhodesia in A the 1972 Olympics in Munich. Standing in f darity with the black African nations, they decided, "If the Africans were not running, the games would not be worth participating n." A But request for comment on the issue at from most of the medal winners was refused. They were either busy signing autographs or dashing for A the disco. It is very f nate that the black Ameri- can athlete could not discern that there s little A difference in the tragedy of riots, A er they be in f troit, Watts, or Soweto, in South . África, f