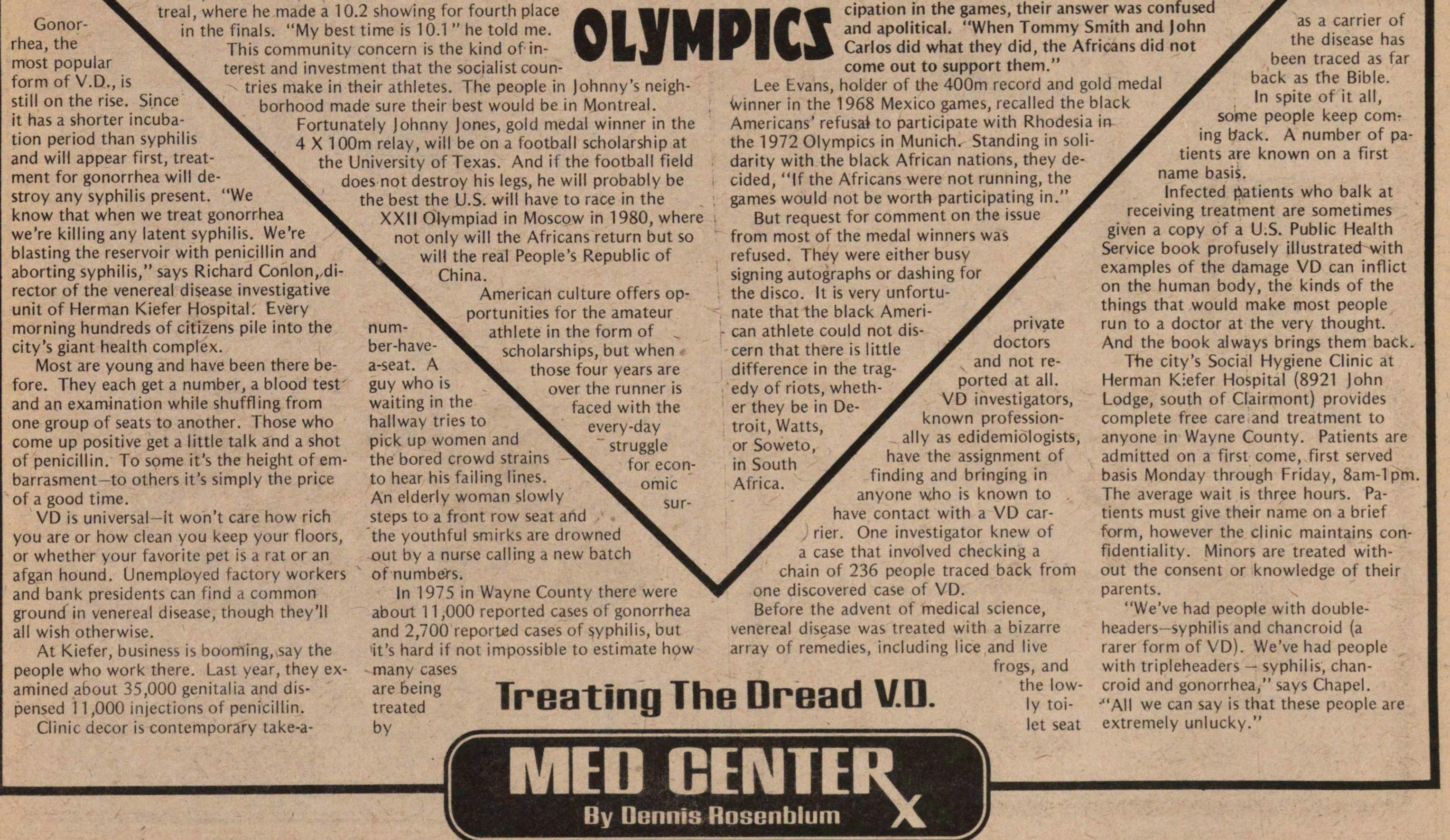 rhea, the most popular form of V.D., s still on the rise. Since t has a shorter tion period than syphilis and will appear first, treatment for eonorrhea will stroy any syphilis present. "We know that when we treat gonorrhea we're killingany latent syphilis. We're blasting the reservoir with penicillin and aborting syphilis," says Richard Conlon,,director of the venereal disease investigative unit of Herman Kiefer Hospital. Every morning hundreds of citizens pile into the city's giant health complex. Most are young and have been there before. They each get a number, a blood test and an examjnation while shuffling from one group of seats to another. Those who come up positive get a little talk and a shot of penicillin. To some it's the height of embarrasment- to others it's simply the price of a good time. VD is universal- it won't care how rich you are or how clean you keep your floors, or whether your favorite pet is a rat or an afgan hound. Unempioyed factory workers and bank presidents can find a common grouncf in venereal disease, though they 'II all wish otherwise. At Kiefer, business is booming, say the people who work there. Last year, they examined about 35,000 genitalia and dispensed ! 1 ,000 injections of penicillin. Clinic decor is contemporary a-seat. A guy who s waiting n the hallway tries to piek up women and the bored crowd strains k to hear his failing lines. An elderly woman slowly steps to a front row seat and the youthful smirks are drowned out by a nurse calling a new batch of numbérs. W In 1975 in Wayne County there were about 1 1 ,000 reported cases of gonorrhea and 2,700 reported cases of syphilis, but t's hard f not impossible to estímate how many cases are being treated T private y doctors and not reported at all. VD nvestigators, known f ally as edidemiölogists, T have the assignment of r finding and bringing in anyone who is known to have contact with a VD f riet. One investigator knew of f a case that nvolved checking a f chain of 236 people traced back from r one discovered case of VD. Before the advent of medical science, venereal disease was treated with a bizarre array of remedies, ncluding Mee and live frogs, and the lowly toilet seat r as a carrier of the disease has been traced as far back as the Bible. f In spite of it all, r some people keep cornr ing back. A number of patients are known on a first f name basis. Y Infected patients who balk at receiving treatment are sometimes given a copy of a U.S. Public Health Service book profusely illustrated with examples of the damage VD can inflict on the human body, the kinds of the things that would make most people run to a doctor at the very thought. And the book always brings them back. Ttie city's Social Hygiëne Clinic at Herman Kiefer Hospital (8921 John Lodge, south of Clairmont) provides complete free care and treatment to anyone in Wayne County. Patients are admitted on a first come, first served basis Monday through Friday, 8am-1pm. The average wait is three hours. Patients must give their name on a brief form, however the clinic maintains confidentiality. Minors are treated without the consent or knowledge of their parents. "We've had people with doubleheaders- syphilis and chancroid (a rarer form of VD). We've had people with tripleheaders - syphilis, chancroid and gonorrhea," says Chapel. "All we can say is that these people are extremely unlucky."