Vital Programs Could Be Restored School Millage Back On Ballot 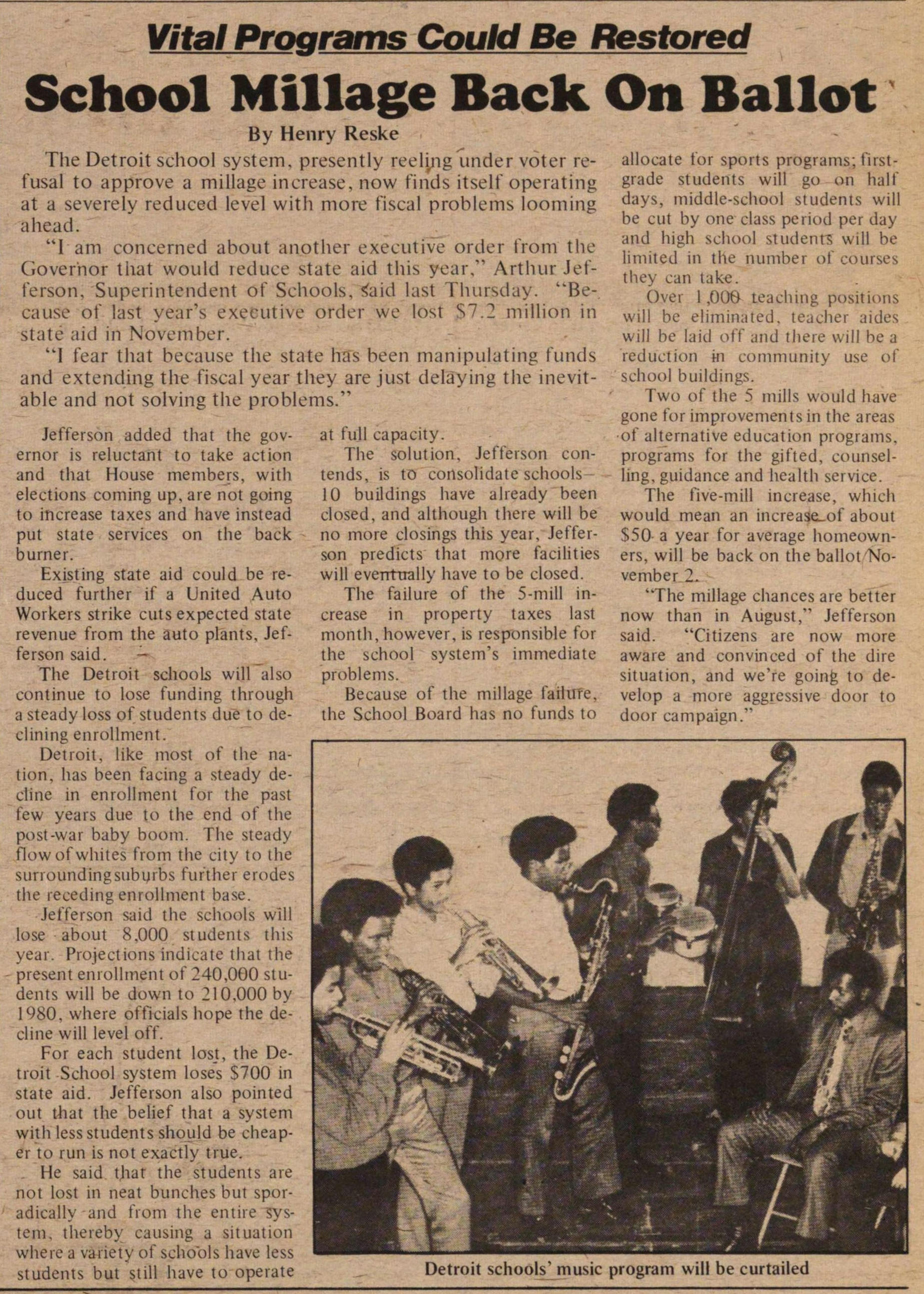 The Detroit school system. presently reeling under voter refusal to approve a millage increase, now finds itself operating at a severely reduced level with more fiscal problems looming ahead.

"I am concerned about another executive order from the Governor that would reduce state aid this year." Arthur Jefferson, Superintendent of Schools, said last Thursday. "Because of last year's executive order we lost $7.2 million in state aid in November.

"I fear that because the state has been manipulating funds and extending the fiscal year they are just delaying the inevitable and not solving the problems."

Jefferson added that the governor is reluctant to take action and that House members, with elections coming up, are not going to increase taxes and have instead put state services on the back burner.

The Detroit schools will also continue to lose funding through a steady loss of students due to declining enrollment.

Detroit, like most of the nation, has been facing a steady decline in enrollment for the past few years due to the end of the post-war baby boom. The steady flow of whites from the city to the surrounding suburbs further erodes the receding enrollment base.

Jefferson said the schools will lose about 8,000 students this year. Projections indicate that the present enrollment of 240,000 students will be down to 210,000 by 1980, where officials hope the decline will level off.

For each student lost, the Detroit School system loses $700 in state aid. Jefferson also pointed out that the belief that a system with less students should be cheaper to run is not exactly true.

He said that the students are not lost in neat bunches but sporadically and from the entire system, thereby causing a situation where a variety of schools have less students but still have to operate at full capacity.

The solution, Jefferson contends, is to consolidate schools- 10 buildings have already been closed, and although there will be no more closings this year, Jefferson predicts that more facilities will eventually have to be closed.

The failure of the 5-mill increase in property taxes last month, however, is responsible for the school system's immediate problems.

Over 1,000 teaching positions will be eliminated, teacher aides will be laid off and there will be a reduction in community use of school buildings.

Two of the 5 mills would have gone for improvements in the areas of alternative education programs, programs for the gifted, counseling, guidance and health service.

The five-mill increase, which would mean an increase of about $50 a year for average homeowners, will be back on the ballot November 2.

"The millage chances are better now than in August," Jefferson said. "Citizens are now more aware and convinced of the dire situation, and we're going to develop a more aggressive door to door campaign."