Inside The Motor City 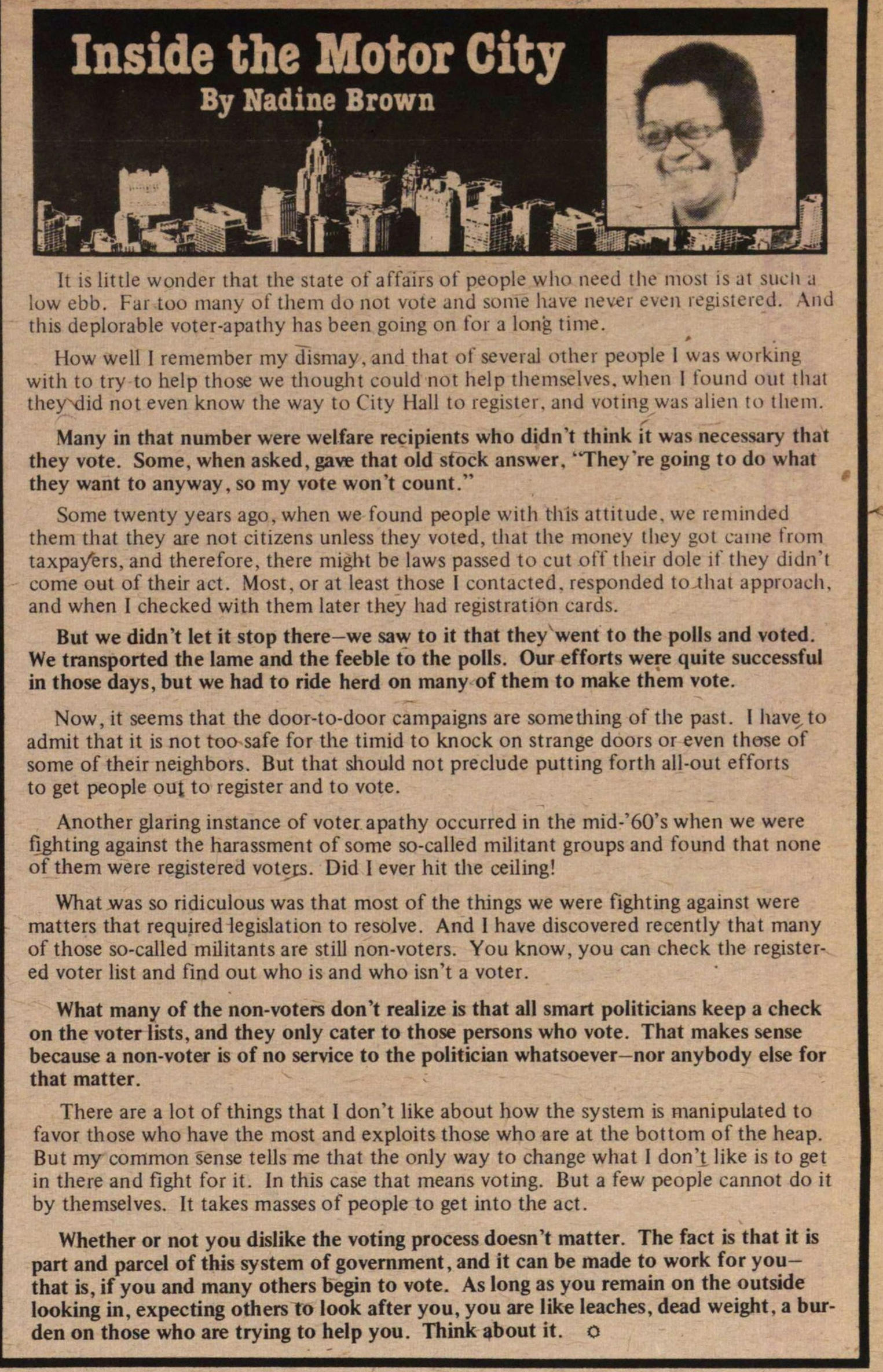 It is little wonder that the state of affairs of people who need the most is at such a low ebb. Far too many oí them do not vote and some have never even registered. And this deplorable voter-apathy has been going on for a long time.

How well I remember my dismay and that of several other people I was working with to try to help those we thought could not help themselves. when I found out that they did not even know the way to City Hall to register, and voting was alien to them.

Many in that number were welfare recipients who didn't think it was necessary that they vote. Some, when asked, gave that old stock answer. "They're going to do what they want to anyway, so my vote won't count."

Some twenty years ago, when we found people with this attitude, we reminded them that they are not citizens unless they voted, that the money they got came from taxpayers, and therefore, there might be laws passed to cut out of their dole if they didn't come out of their act. Most, or at least those I contacted, responded to that approach, and when I checked with them later they had registration cards.

But we didn't let it stop there-we saw to it that they went to the polls and voted. We transported the lame and the feeble to the polls. Our efforts were quite successful in those days, but we had to ride herd on many of them to make them vote.

Now, it seems that the door-to-door campaigns are something of the past. I have to admit that it is not too safe for the timid to knock on strange doors or even those of some of their neighbors. But that should not preclude putting forth all-out efforts to get people out to register and to vote.

Another glaring instance of voter apathy occurred in the mid-'60's when we were fighting against the harassment of some so-called militant groups and found that none of them were registered voters. Did I ever hit the ceiling! What was so ridiculous was that most of the things we were fighting against were matters that required legislation to resolve. And I have discovered recently that many of those so-called militants are still non-voters. You know, you can check the registered voter list and find out who is and who isn't a voter.

What many of the non-voters don't realize is that all smart politicians keep a check on the voter lists, and they only cater to those persons who vote. That makes sense because a non-voter is of no service to the politician whatsoever-nor anybody else for that matter.

There are a lot of things that I don't like about how the system is manipulated to favor those who have the most and exploits those who are at the bottom of the heap. But my common sense tells me that the only way to change what I don't like is to get in there and fight for it. In this case, that means voting. But a few people cannot do it by themselves. It takes masses of people to get into the act.

Whether or not you dislike the voting process doesn't matter. The fact is that it is part and parcel of this system of government, and it can be made to work for you, that is if you and many others begin to vote. As long as you remain on the outside looking in, expecting others to look after you, you are like leeches, dead weight, a burden on those who are trying to help you. Think about it. O