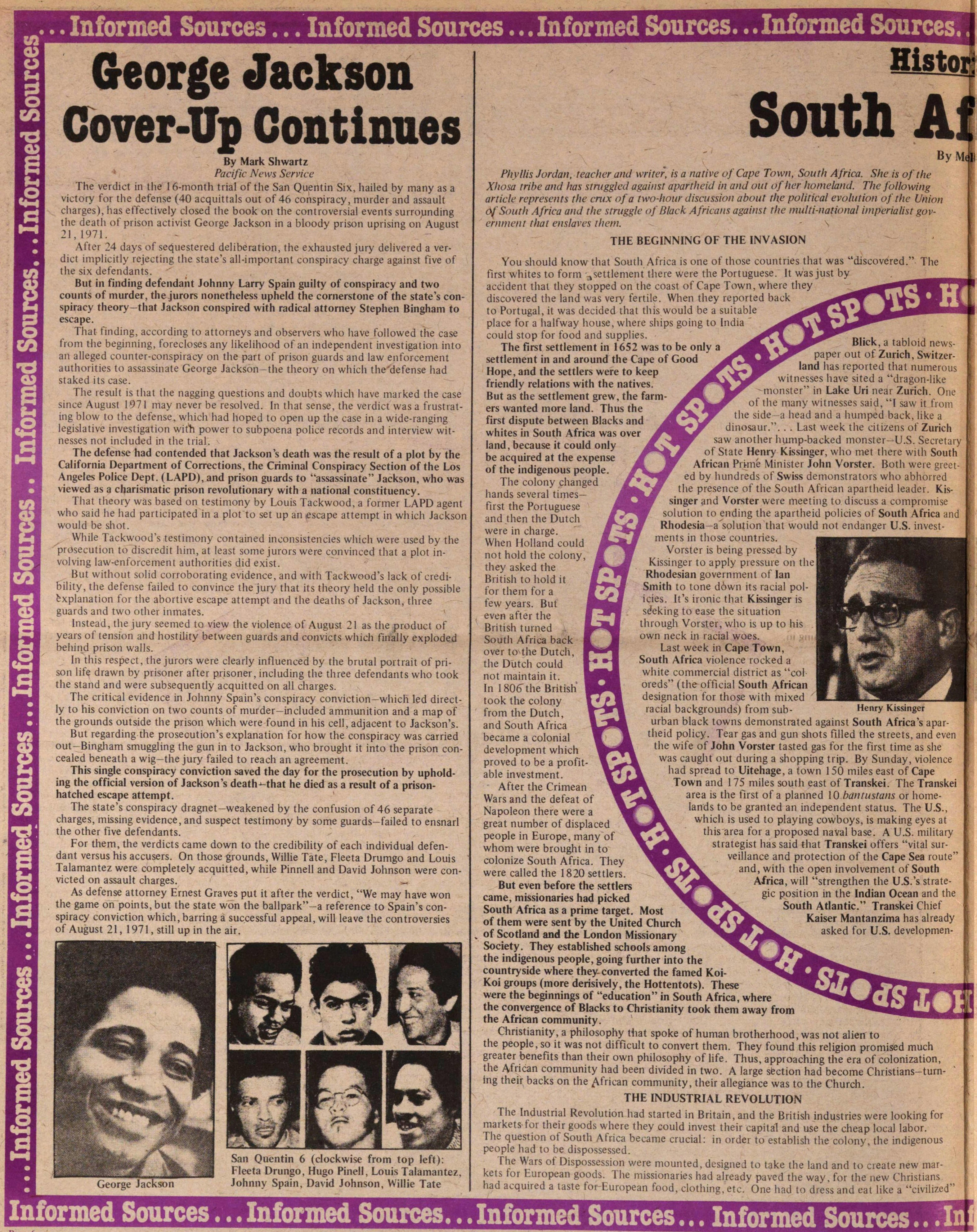 Phyllis Jordan, teacher and writer, is a native of Cape Town, South Africa. She is of the Xhosa tribe and has struggled against apartheid in and out of her homeland. The following article represent s the crux of a two-how discussion about the political evolution of the Union of South Africa and the struggle of Black Africans against the multi-national imperialist government  that enslaves them.

THE BEGINNING OF THE INVASION

You should know that South Africa is one of those countries that was "discovered." The first whites to form settlement there were the Portuguese. It was just by accident that they stopped on the coast of Cape Town, where they discovered the land was very fertile. When they reported back to Portugal, it was decided that this would be a suitable place for a halfway house, where ships going to India could stop for food and supplies.

The first settlement in 1652 was to be only a settlement in and around the Cape of Good Hope, and the settlers were to keep friendly relations with the natives. But as the settlement grew, the farmers wanted more land. Thus the first dispute between Blacks and whites in South Africa was over land, because it could only be acquired at the expense of the indigenous people.

After the Crimean Wars and the defeat of Napoleon there were a great number of displaced people in Europe, many of whom were brought in to colonize South Africa. They were called the 1820 settlers.

But even before the settlers came, missionaries had picked South Africa as a prime target. Most of them were sent by the United Church of Scotland and the London Missionary Society. They established schools among the indigenous people, going further into the countryside where they converted the famed Koi-Koi groups (more derisively, the Hottentots). These were the beginnings of "education" in South Africa, where the convergence of Blacks to Christianity took them away from the African community.

Christianity, a philosophy that spoke of human brotherhood, was not alien to the people, so it was not difficult to convert them. They found this religion promised much greater benefits than their own philosophy of life. Thus, approaching the era of colonization, the African community had been divided in two. A large section had become Christians, turning their backs on the African community, their allegiance was to the Church.

The Industrial Revolution had started in Britain, and the British industries were looking for markets for their goods where they could invest their capital and use the cheap local labor. The question of South Africa became crucial: in order to establish the colony, the indigenous people had to be dispossessed.

The Wars of Dispossession were mounted, designed to take the land and to create new markets for European goods. The missionaries had already paved the way. for the new Christians had acquired a taste for-European food, clothing. etc. One had to dress and eat like a "civilized"