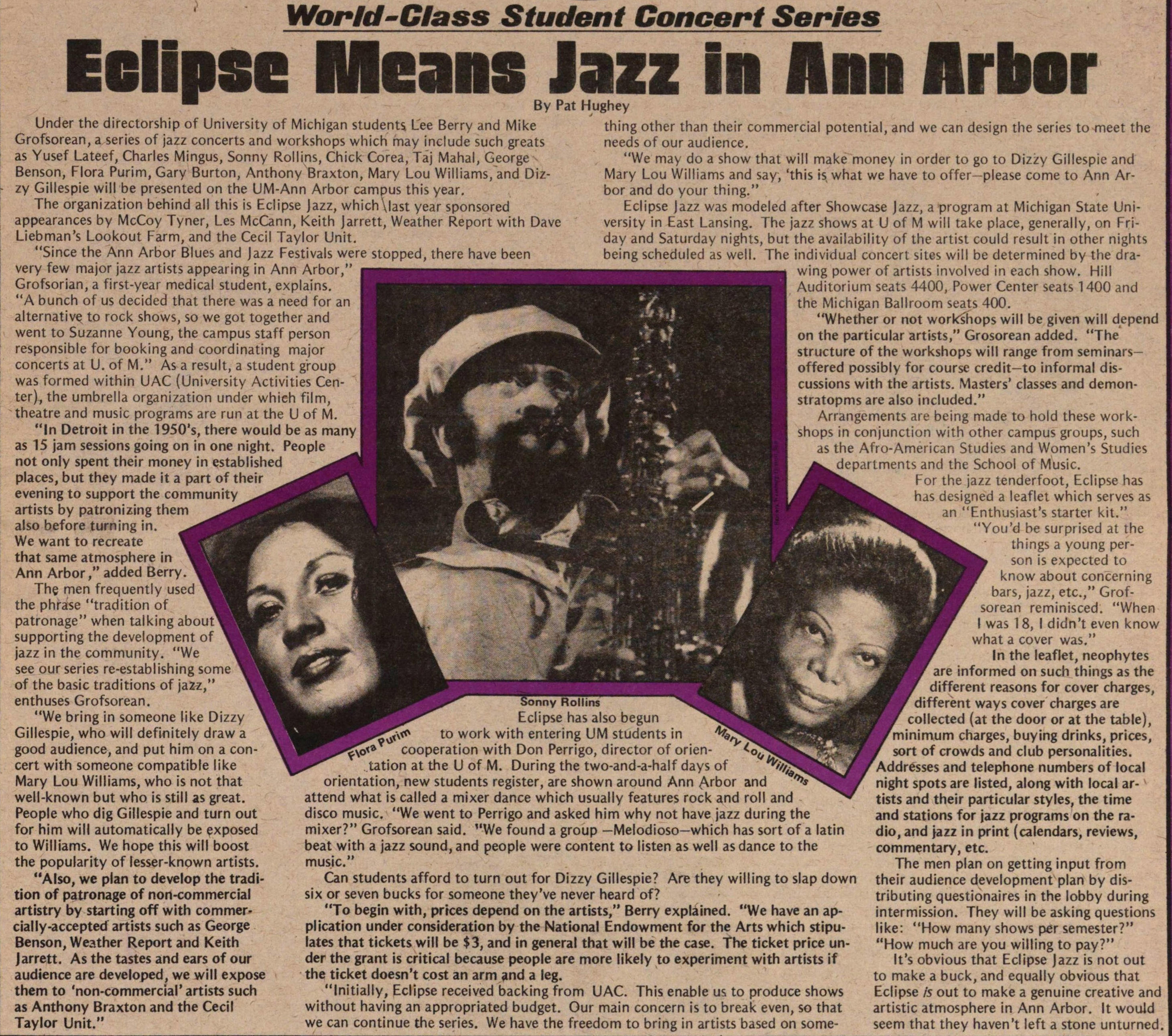 Under the directorship of University of Michigan student Lee Berry and Mike Grofsorean, a series of jazz concerts and workshops which may include such greats as Yusef Lateef, Charles Mingus, Sonny Rollins, Chick Corea, Taj Mahal, George Benson, Flora Purim, Gary Burton, Anthony Braxton, Mary Lou Williams, and Dizzy Gillespie will be presented on the UM-Ann Arbor campus this year.

The organization behind all this is Eclipse Jazz, which last year sponsored appearances by McCoy Tyner, Les McCann, Keith Jarrett, Weather Report with Dave Liebman's Lookout Farm, and the Cecil Taylor Unit.

"Since the Ann Arbor Blues and Jazz Festivals were stopped, there have been very few major jazz artists appearing in Ann Arbor," Grofsoran, a first-year medical student, explains. "A bunch of us decided that there was a need for an alternative to rock shows, so we got together and went to Suzanne Young, the campus staff person responsible for booking and coordinating major concerts at U. of M." As a result, a student group was formed within UAC (University Activities Center), the umbrella organization under which film, theatre and music programs are run at the U of M.

“In Detroit in the 1950's, there would be as many as 15 jam sessions going on in one night. People not only spent their money in established places, but they made it a part of their evening to support the community artists by patronizing them also before turning in. We want to recreate that same atmosphere in Ann Arbor," added Berry.

The men frequently used the phrase "tradition of patronage" when talking about supporting the development of jazz in the community. "We see our series re-establishing some of the basic traditions of jazz," enthuses Grofsorean.

"We bring in someone like Dizzy Gillespie, who will definitely draw a good audience, and put him on a concert with someone compatible like Mary Lou Williams, who is not that well-known but who is still as great. People who dig Gillespie and turn out for him will automatically be exposed to Williams. We hope this will boost the popularity of lesser-known artists.

"Also, we plan to develop the tradition of patronage of non-commercial artistry by starting off with commercially-accepted artists such as George Benson, Weather Report and Keith Jarrett. As the tastes and ears of our audience are developed, we will expose them to 'non-commercial' artists such as Anthony Braxton and the Cecil Taylor Unit."

Eclipse has also begun to work with entering UM students in cooperation with Don Perrigo, director of orientation at the U of M. During the two-and-a-half days of orientation, new students register, are shown around Ann Arbor and attend what is called a mixer dance which usually features rock and roll and disco music. "We went to Perrigo and asked him why not have jazz during the mixer?" Grofsorean said. "We found a group - Melodioso - which has sort of a latin beat with a jazz sound, and people were content to listen as well as dance to the music."

Can students afford to turn out for Dizzy Gillespie? Are they willing to slap down six or seven bucks for someone they've never heard of?

"To begin with, prices depend on the artists," Berry explained. "We have an application under consideration by the National Endowment for the Arts which stipulates that tickets will be $3, and in general that will be the case. The ticket price under the grant is critical because people are more likely to experiment with artists if the ticket doesn't cost an arm and a leg.

"Initially, Eclipse received backing from UAC. This enable us to produce shows without having an appropriated budget. Our main concern is to break even, so that we can continue the series. We have the freedom to bring in artists based on something other than their commercial potential, and we can design the series to meet the needs of our audience.

"We may do a show that will make money in order to go to Dizzy Gillespie and Mary Lou Williams and say, 'this is what we have to offer - please come to Ann Arbor and do your thing."

Eclipse Jazz was modeled after Showcase jazz, a program at Michigan State University in East Lansing. The jazz shows at U of M will take place, generally, on Friday and Saturday nights, but the availability of the artist could result in other nights being scheduled as well. The individual concert sites will be determined by the drawing power of artists involved in each show. Hill Auditorium seats 4400, Power Center seats 1400 and the Michigan Ballroom seats 400.

"Whether or not workshops will be given will depend on the particular artists," Grosorean added. "The structure of the workshops will range from seminars - offered possibly for course credit - to informal discussions with the artists. Masters' classes and demonstratopms are also included."

Arrangements are being made to hold these workshops in conjunction with other campus groups, such as the Afro-American Studies and Women's Studies departments and the School of Music. For the jazz tenderfoot, Eclipse has has designed a leaflet which serves as an "Enthusiast's starter kit." "You'd he surprised at the things a young person is expected to know about concerning bars, jazz, etc," Grofsorean reminisced. "When I was 18, I didn't even know what a cover was."

In the leaflet, neophytes "are informed on such things as the different reasons for cover charges, different ways cover charges are collected (at the door or at the table), minimum charges, buying drinks, prices, sort of crowds and club personalities. Addresses and telephone numbers of local night spots are listed, along with local artists and their particular styles, the time and stations for jazz programs on the radio, and jazz in print (calendars, reviews, commentary, etc.

The men plan on getting input from their audience development plan by distributing questionaires in the lobby during intermission. They will be asking questions I like: "How many shows per semester?" "How much are you willing to pay?"