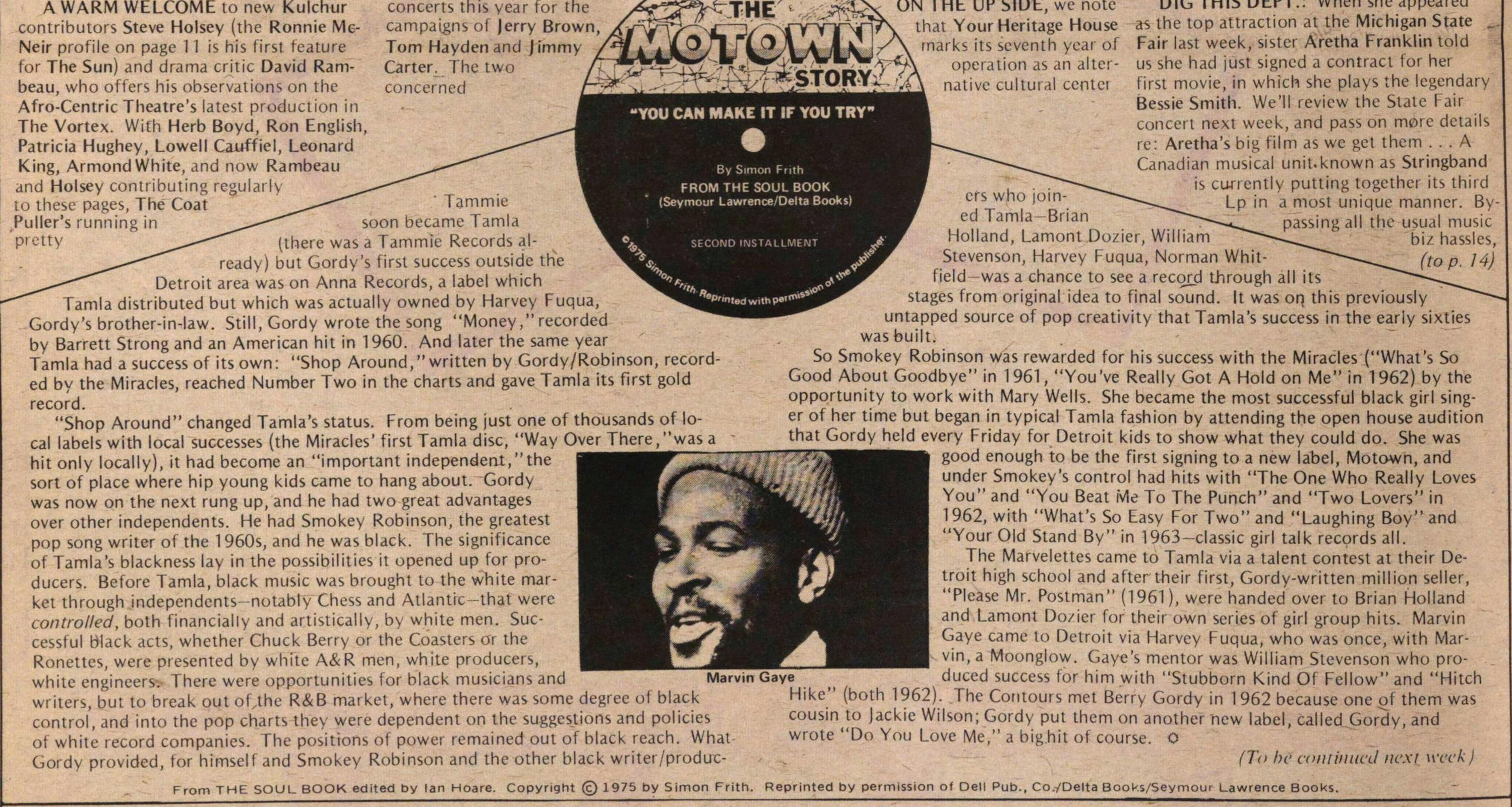 "YOU CAN MAKE IT IF YOU TRY"

FROM THE SOUL BOOK

1975 Simon Frith Reprinted with permission of the publisher

Tammie soon became Tamla (there was a Tammie Records already) but Gordy's first success outside the Detroit area was on Anna Records, a label which Tamla distributed but which was actually owned by Harvey Fuqua, Gordy's brother-in-law. Still, Gordy wrote the song "Money ,"recorded by Barrett Strong and an American hit in 1960. And later the same year Tamla had a success of its own: "Shop Around, " written by Gordy/Robinson, recorded by the Miracles, reached Number Two in the charts and gave Tamla its first gold record.

"Shop Around" changed Tamla's status. From being just one of thousands of local labels with local successes (the Miracles' first Tamla disc, "Way Over There,"was a hit only locally), it had become an "important independent, "the sort of place where hip young kids came to hang about. Gordy was now on the next rung up, and he had two great advantages over other independents. He had Smokey Robinson, the greatest pop song writer of the 1960s, and he was black. The significance of Tamla's blackness lay in the possibilities it opened up for producers. Before Tamla, black music was brought to the white market through notably Chess and Atlantic-that were controlled, both financially and artistically, by white men. Successful black acts, whether Chuck Berry or the Coasters or the Ronettes, were presented by white A&R men, white producers, white  engineers. There were opportunities for black musicians and writers, but to break out of,the R&B market where there was some degree of black control, and into the pop charts they were dependent on the suggestions and policies of white record companies. The positions of power remained out of black reach. What Gordy provided, tor himself and Smokey Robinson and the other black writers/producers who joined Tamla - Brian Holland, Lamont Dozier, William Stevenson, Harvey Fuqua, Norman Whitfield - was a chance to see a record through all ts stages from original idea to final sound. It was on this previously  untapped source of pop creativity that Tamla's success in the early sixties was built.

So Smokey Robinson was rewarded for his success with the Miracles ("What's So Good About Goodbye" in 1961, "You've Really Got A Hold on Me" in 1962) by the opportunity to work with Mary Wells. She became the most successful black girl singer of her time but began in typical Tamla fashion by attending the open house audition that Gordy held every Friday for Detroit kids to show what they could do. She was good enough to be the first signing to a new label, Motown, and under Smokey's control had hits with "The One Who Really Loves You" and "You Beat Me To The Punch" and "Two Lovers" in 1962, with "What's So Easy For Two" and "Laughing Boy" and "Your Old Stand By" n 1963-classic girl talk records all.

The Marvelettes came to Tamla via a talent contest at their Detroit high school and after their first, Gordy-written million seller, "Please Mr. Postman" (1961), were handed over to Brian Holland and Lamont Dozier for their own series of girl group hits. Marvin Gaye came to Detroit via Harvey Fuqua, who was once, with Marvin, a Moonglow. Gaye's mentor was William Stevenson who produced success for him with "Stubborn Kind Of Fellow" and "Hitch Hike (both 1962). The Contours met Berry Gordy in 1962 because one of them was cousin to Jackie Wilson; Gordy put them on another new label, called Gordy, and wrote "Do You Love Me," a big hit of course.

(To be continued next week)