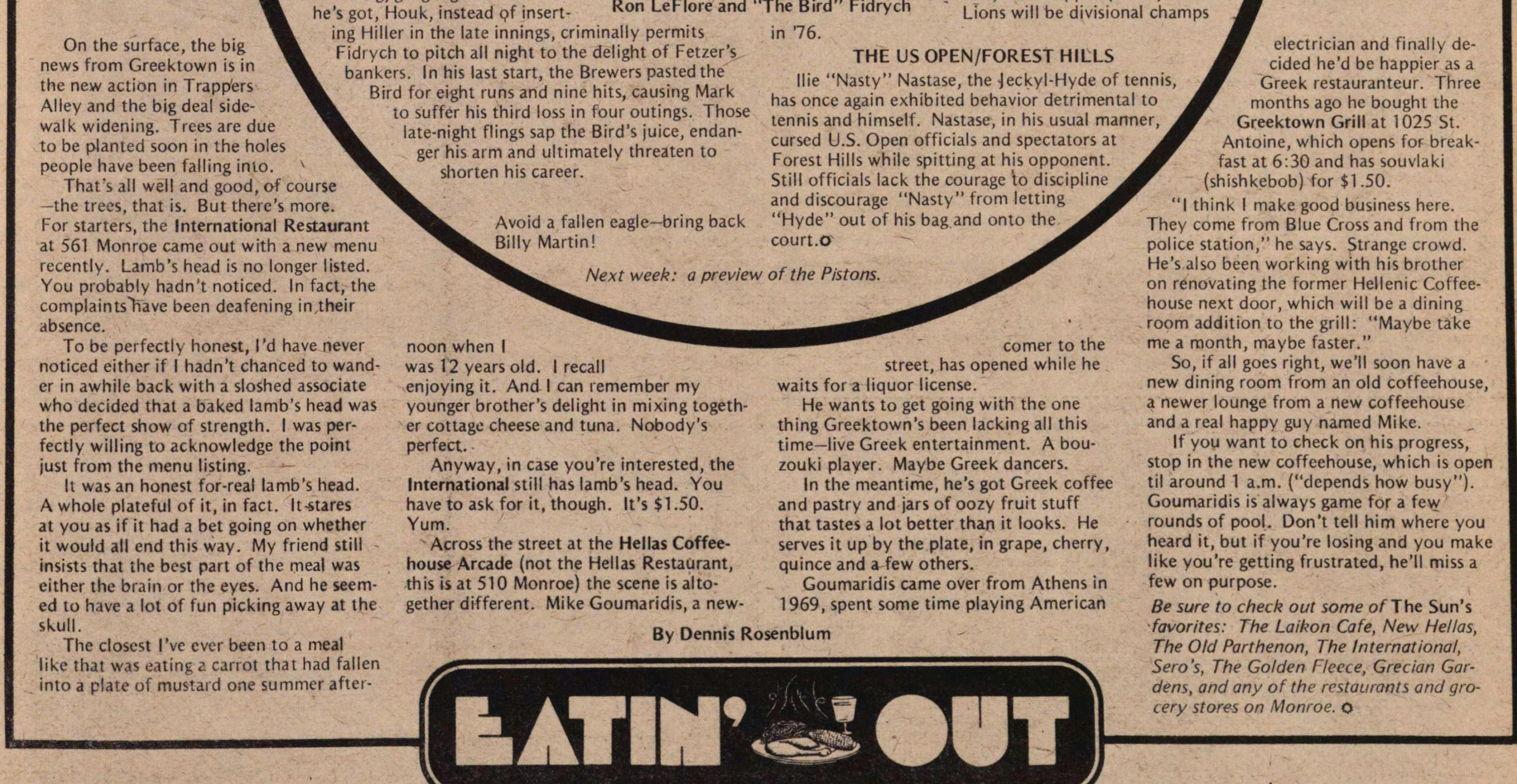 On the surface, the big news from Greektown is in " the new action in Trappers Alley and the big deal sidewalk widening. Trees are due to be planted soon in the holes people have been falling into.

That's all well and good, of course -the trees, that is. But there's more. For starters, the International Restaurant at 561 Monroe came out with a new menu recently. Lamb's head is no longer listed. You probably hadn't noticed. In fact, the complaints have been deafening in their absence.

To be perfectly honest, l'd have never noticed either if I hadn't chanced to wander in awhile back with a sloshed associate who decided that a baked lamb's head was the perfect show of strength. I was perfectly willing to acknowledge the point just from the menu listing.

It was an honest for-real lamb's head. A whole plateful of it, in fact. It stares at you as if it had a bet going on whether it would all end this way. My friend still insists that the best part of the meal was either the brain or the eyes. And he seemed to have a lot of fun picking away at the skull.

The closest l've ever been to a meal like that was eating a carrot that had fallen into a plate of mustard one summer noon when I was 12 years old. I recall enjoying it. And I can remember my younger brother's delight in mixing together cottage cheese and tuna. Nobody's perfect.

Anyway, in case you're interested, the International still has lamb's head. You have to ask for it, though. It's $1.50. Yum.

Across the street at the Hellas Coffeehouse Arcade (not the Hellas Restaurant, this is at 510 Monroe) the scene is altogether different. Mike Goumaridis, a comer to the street, has opened while he waits for a liquor license.

He wants to get going with the one thing Greektown's been lacking all this time- live Greek entertainment. A bouzouki player. Maybe Greek dancers.

In the meantime, he's got Greek coffee and pastry and jars of oozy fruit stuff that tastes a lot better than it looks. He serves it up by the plate, in grape, cherry, quince and a few others. Goumaridis came over from Athens in 1969, spent some time playing American  electrician and finally decided he'd be happier as a Greek restauranteur. Three months ago he bought the Greektown Grill at 1025 St. Antoine, which opens for breakfast at 6:30 and has souvlaki (shishkebob) for $1.50.

"I think I make good business here. They come from Blue Cross and from the police station," he says. Strange crowd. He's also been working with his brother on renovating the former Hellenic Coffeehouse next door, which will be a dining room addition to the grill: "Maybe take me a month, maybe faster."

So, if all goes right, we 'II soon have a new dining room from an old coffeehouse, a newer lounge from a new coffeehouse and a real happy guy named Mike.

If you want to check on his progress, stop in the new coffeehouse, which is open til around 1 a.m. ("depends how busy"). Goumaridis is always game for a few rounds of pool. Don't tell him where you heard it, but if you're losing and you make like you're getting frustrated, he'll miss a few on purpose.

Be sure to check out some of The Sun's favorites: The Laikon Cafe, New Hellas, The Old Parthenon, The International, Sero's, The Golden Fleece, Grecian Gardens, and any of the restaurants and grocery stores on Monroe.