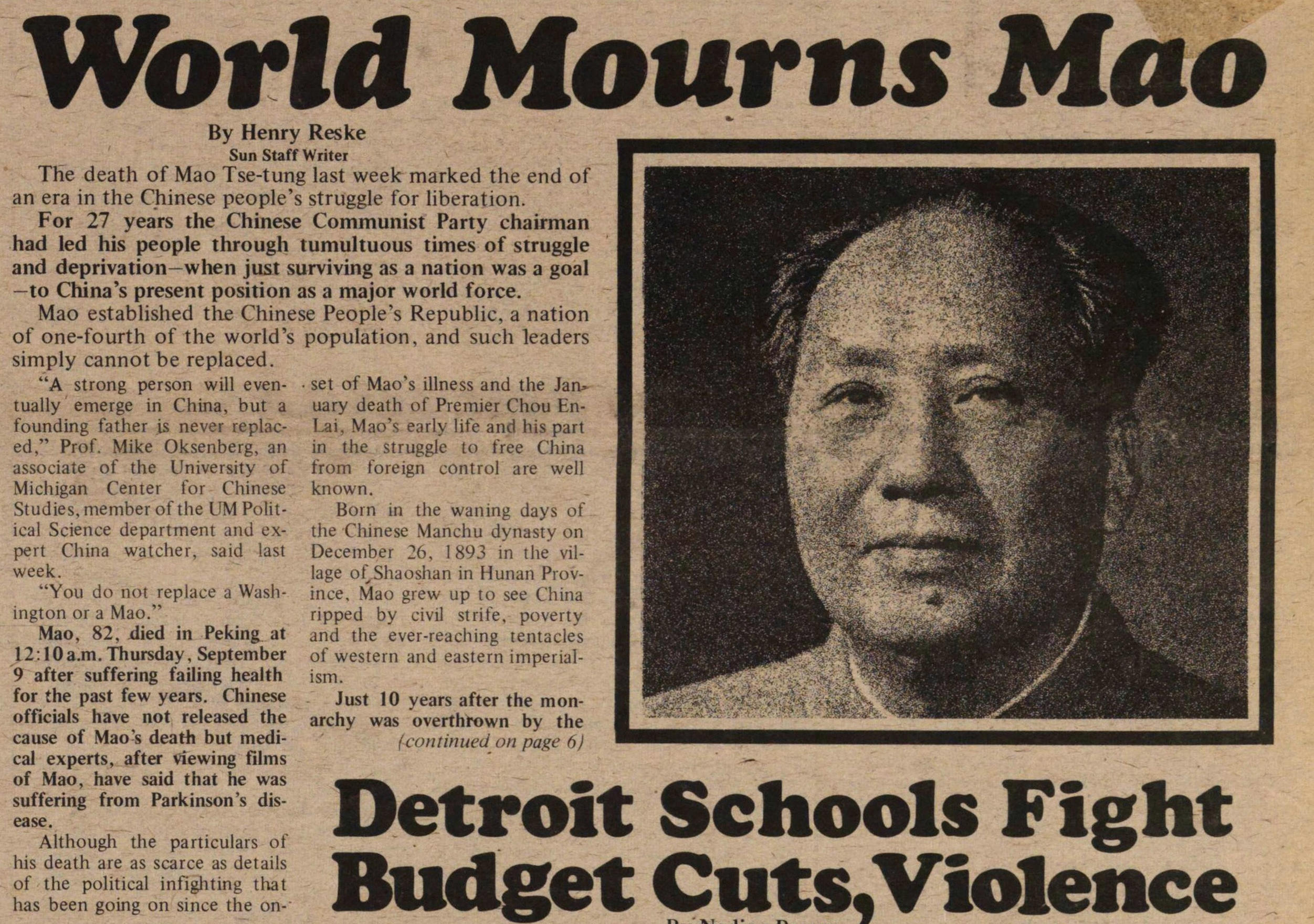 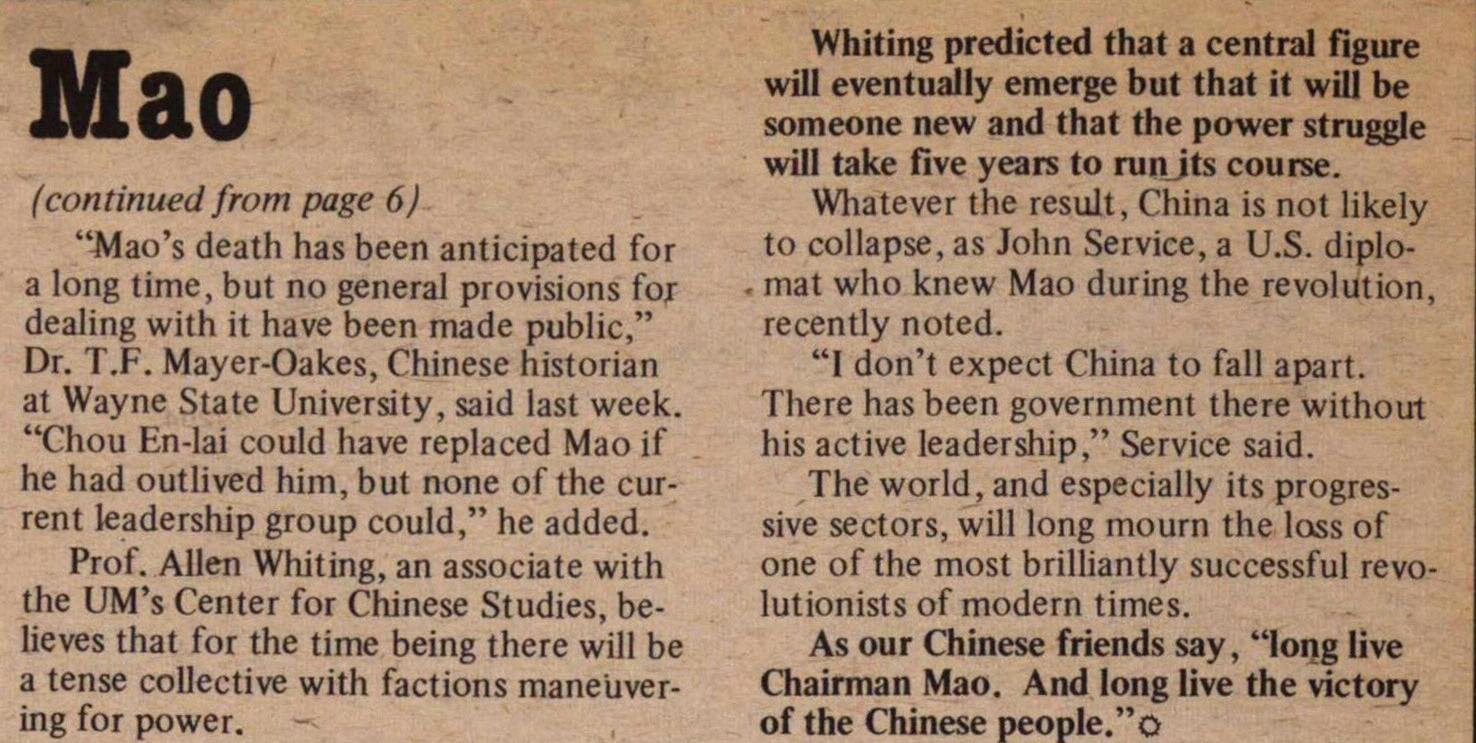 The death of Mao Tse-tung last week marked the end of an era in the Chinese people's struggle for liberation.

For 27 years the Chinese Communist Party chairman had led his people through tumultuous times of struggle and deprivation- when just surviving as a nation was a goal - to China 's present position as a major world force.

Mao established the Chinese People's Republic, a nation of one-fourth of the world's population, and such leaders simply cannot be replaced.

"A strong person will eventually emerge in China, but a founding father is never replaced," Prof. Mike Oksenberg, an associate of the University of Michigan Center for Chinese Studies, member of the UM Political Science department and expert China watcher, said last week.

"You do not replace a Washington or a Mao."

Mao, 82, died in Peking at 12:10 a.m. Thursday, September 9 after suffering failing health for the past few years. Chinese officials have not released the cause of Mao 's death but medical experts, after viewing films of Mao, have said that he was suffering from Parkinson's disease.

Although the particulars of his death are as scarce as details of the political infighting that has been going on since the onset of Mao's illness and the January death of Premier Chou EnLai, Mao's early life and his part in the struggle to free China from foreign control are well known.

Born in the waning days of the Chinese Manchu dynasty on December 26, 1893 in the village of Shaoshan in Hunan Province, Mao grew up to see China ripped by civil strife, poverty and the ever-reaching tentacles of western and eastern imperialism.

Just 10 years after the monarchy was overthrown by the

followers of Dr. Sun Yat-sen, Mao became one of the 13 founding members of the Chinese Communist Party in 1921.

Mao assumed leadership of the party in 1935 at the age of 42, during what must have been the party's darkest era-the time of the 8,000 mile "Long March."

The march began as 120,000 fleeing Red Army troops retreated from the armies of Nationalist Generalissmo Chiang Kai-shek. Only 20,000 survived the march.

Despite such losses, Mao rebuilt the Communist army to a strength of one million by the end of WWII.

Civil war broke out in 1946, and three years later Mao proclaimed victory. The struggle, however, was not over.

The insult of imperialism that had angered the Chinese for a century had not ended. During the Korean war of the early 50's United Nations Forces, comprised mostly of American troops, moved close to the Chinese border, and U.S. Navy General Douglas MacArthur urged war with China.

Although a shooting war with China was averted, the course taken by the United States for the next 20 years was definitely a hostile one.

A strict trade embargo against both China and North Korea was soon enacted by the United Nations and the United States, beginning the U.S. policy of containment of the "Red Menace" which lasted until the unlikely compromiser Richard M. Nixon travelled to China in 1972.

During his lifetime Mao was a true believer in the power of the masses and of a continuing revolution. He shunned the trappings of power yet was almost a god to the 800 million Chinese he ruled.

His words, printed in The Red Bonk, are recited by children in schools and workers in the fields.

Mao's work for the people of China is equally indelible.

He lifted their faces from the dust and deprivation of years of foreign domination and welded them into a world power in only 27 years. He took a starving, illiterate, semi-feudal, largely agricultural country and turned it into a modern, industrialized socialist state.

Mao's legacy, however, is not so certain. With the death of Chou En-lai, premier and presumed successor to Mao, earlier this year there has been a great deal of speculation about Mao's successor.

The new Premier, Hua Kuo-feng, seems to be the logical choice as heir-apparent to the post of party chairman, but Mao named no successor and China experts, while noting that information about China 's into internal politics is at best slim, see a collective leadership as a likely form of government for the near future.

"Mao's death has been anticipated for a long time, but no general provisions for dealing with it have been made public," Dr. T.F. Mayer-Oakes, Chinese historian at Wayne State University, said last week. "Chou En-lai could have replaced Mao if he had outlived him, but none of the current leadership group could," he added. Prof. Allen Whiting, an associate with the UM's Center for Chinese Studies, believes that for the time being there will be a tense collective with factions maneuvering for power.

Whiting predicted that a central figure will eventually emerge but that it will be someone new and that the power struggle will take five years to run its course.

Whatever the result, China is not likely to collapse, as John Service, a U.S. diplomat who knew Mao during the revolution, recently noted.

"I don't expect China to fall apart. There has been government there without his active leadership," Service said.

The world, and especially its progressive sectors, will long mourn the loss of one of the most brilliantly successful revolutionists of modern times.

As our Chinese friends say, "long live Chairman Mao. And long live the victory of the Chinese people."