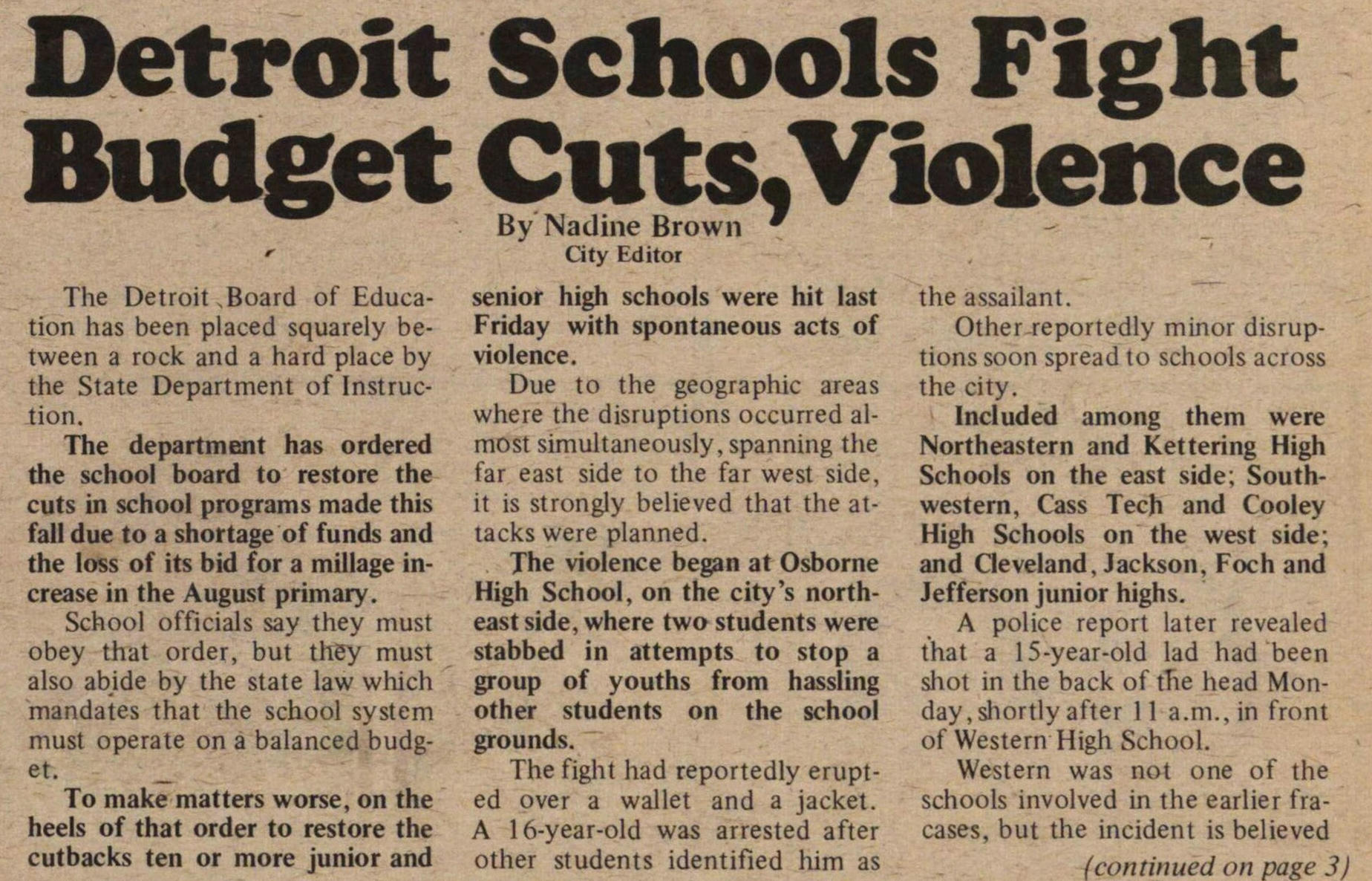 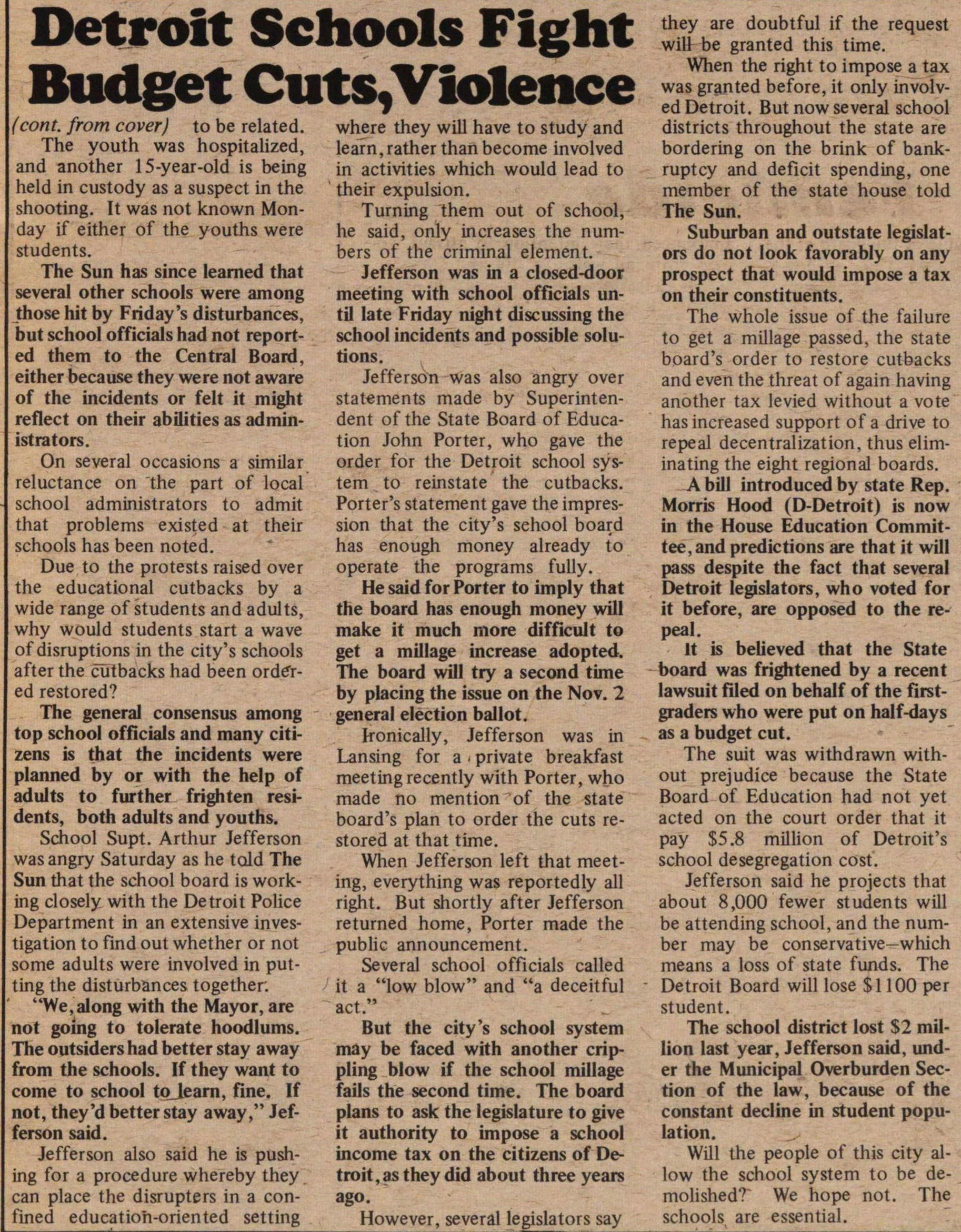 The Detroit Board of Education has been placed squarely between a rock and a hard place by the State Department of Instruction.

The department has ordered the school board to restore the cuts in school programs made this fall due to a shortage of funds and the loss of its bid for a millage increase in the August primary.

School officials say they must obey that order, but they must also abide by the state law which mandates that the school system must operate on a balanced budget.

To make matters worse, on the heels of that order to restore the cutbacks ten or more junior and senior high schools were hit last Friday with spontaneous acts of violence.

Due to the geographic areas where the disruptions occurred almost simultaneously, spanning the far east side to the far west side, it is strongly believed that the attacks were planned.

The violence began at Osborne High School, on the city's northeast side, where two students were stabbed in attempts to stop a group of youths from hassling other students on the school grounds.

The fight had reportedly erupted over a wallet and a jacket. A 16-year-old was arrested after other students identified him as the assailant.

Other reportedly minor disruptions soon spread to schools across the city.

A police report later revealed that a 15-year-old lad had been shot in the back of the head Monday shortly after 11 a.m., in front of Western High School.

Western was not one of the schools involved in the earlier fracases, but the incident is believed

to be related. The youth was hospitalized, and another 15-year-old is being held in custody as a suspect in the shooting. It was not known Monday if either of the youths were students.

The Sun has since learned that several other schools were among those hit by Friday's disturbances, but school officials had not reported them to the Central Board, either because they were not aware of the incidents or felt might reflect on their abilities as administrators.

On several occasions a similar reluctance on the part of local school administrators to admit that problems existed at their schools has been noted.

Due to the protests raised over the educational cutbacks by a wide range of students and adults, why would students start a wave of disruptions in the city's schools after the cutbacks had been ordered restored?

The general consensus among top school officials and many citizens is that the incidents were planned by or with the help of adults to further frighten residents, both adults and youths.

School Supt. Arthur Jefferson was angry Saturday as he told The Sun that the school board is working closely with the Detroit Police Department in an extensive investigation to find out whether or not some adults were involved in putting the disturbances together.

"We, along with the Mayor, are not going to tolerate hoodlums. The outsiders had better stay away from the schools. If they want to come to school to learn fine. If not, they'd better stay away," Jefferson said.

Jefferson also said he is pushing for a procedure whereby they can place the disrupters in a confined education-oriented setting where they will have to study and learn,rather than become involved in activities which would lead to their expulsion.

Turning them out of school, he said, only increases the numbers of the criminal element.

Jefferson was in a closed-door meeting with school officials until late Friday night discussing the school incidents and possible solutions.

Jefferson was also angry over statements made by Superintendent of the State Board of Education John Porter, who gave the order for the Detroit school system to reinstate the cutbacks. Porter's statement gave the impression that the city's school board has enough money already to operate the programs fully.

He said for Porter to imply that the board has enough money will make it much more difficult to get a millage increase adopted. The board will try a second time by placing the issue on the Nov. 2 general election ballot.

Ironically, Jefferson was in Lansing for a private breakfast meeting recently with Porter, who made no mention of the state board's plan to order the cuts restored at that time.

When Jefferson left that meeting, everything was reportedly all right. But shortly after Jefferson returned home, Porter made the public announcement.

Several school officials called it a "low blow" and "a deceitful act."

But the city's school system may be faced with another crippling blow if the school millage fails the second time. The board plans to ask the legislature to give it authority to impose a school income tax on the citizens of Detroit, as they did about three years ago.

However, several legislators say they are doubtful if the request will be granted this time.

When the right to impose a tax was granted before, it only involved Detroit. But now several school districts throughout the state are bordering on the brink of bankruptcy and deficit spending, one member of the state house told The Sun.

Suburban and out state legislators do not look favorably on any prospect that would impose a tax on their constituents.

The whole issue of the failure to get a millage passed, the state board's order to restore cutbacks and even the threat of again having another tax levied without a vote has increased support of a drive to repeal decentralization, thus eliminating the eight regional boards.

A bill introduced by state Rep. Morris Hood (D-Detroit) is now in the House Education Committee, and predictions are that it will pass despite the fact that several Detroit legislators, who voted for it before, are opposed to the repeal. It is believed that the State board was frightened by a recent lawsuit filed on behalf of the first graders who were put on half-days as a budget cut.

The suit was withdrawn without prejudice because the State Board of Education had not yet acted on the court order that it pay $5.8 million of Detroit's school desegregation cost.

Jefferson said he projects that about 8,000 fewer students will be attending school, and the number may be conservative- which means a loss of state funds. The Detroit Board will lose $1100 per student.

The school district lost $2 million last year, Jefferson said, under the Municipal Overburden Section of the law, because of the constant decline in student population.

Will the people of this city allow the school system to be demolished? We hope not. The schools are essential.