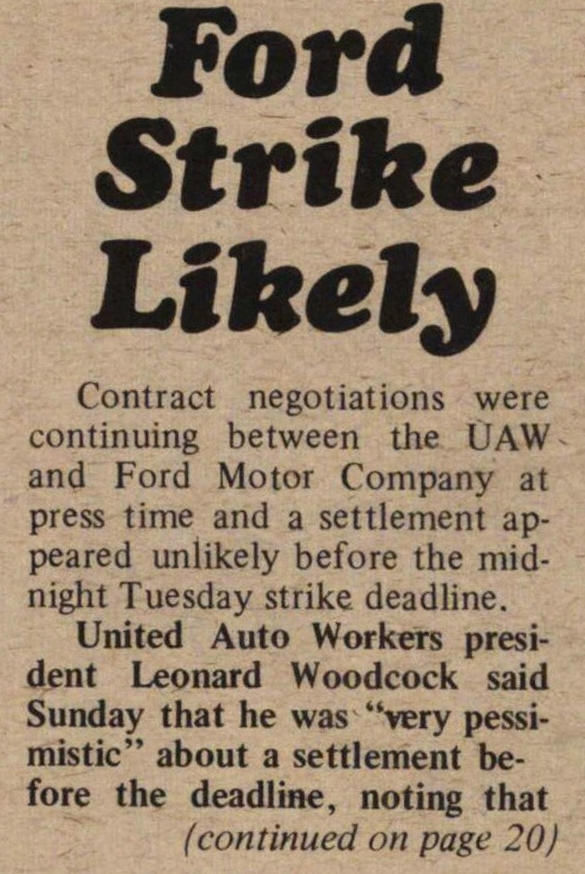 Contract negotiations were continuing between the UAW and Ford Motor Company at press time and a settlement appeared unlikely before the midnight Tuesday strike deadline.

United Auto Workers president Leonard Woodcock said Sunday that he was "very pessimistic" about a settlement before the deadline, noting that

"we are a long, long way apart and it does not look good."

The contract talks went into the traditional around-the-clock bargaining sessions as the deadline neared, with talks continuing through Sunday. Bargainers recessed at 6:30 p.m. Sunday and resumed talks at 9:45 a.m. Monday.       Woodcock made his statement at the 40th anniversary celebration of UAW Local 174, home local of Walter Reuther, and then returned to the bargaining at Ford World Headquarters in Dearborn at 4:30 p.m. Sunday.

He said Ford has not moved on two key UAW demands: a reduction in work time and pension supplements for retirees whose pension checks have been reduced by inflation.

Ford spokespersons have stated that the 40-hour work-week has already been cut to an average of 33 hours by vacations, relief breaks, holidays, paid absences and other time off.

Negotiators met at three levels Sunday in hopes of working out a new agreement for Ford's 170,000 hourly workers.

Separate groups met to discuss economic issues, such as wages and benefits; non-economic issues as contract language; and in subcommittee meetings.