Gangs And The Media 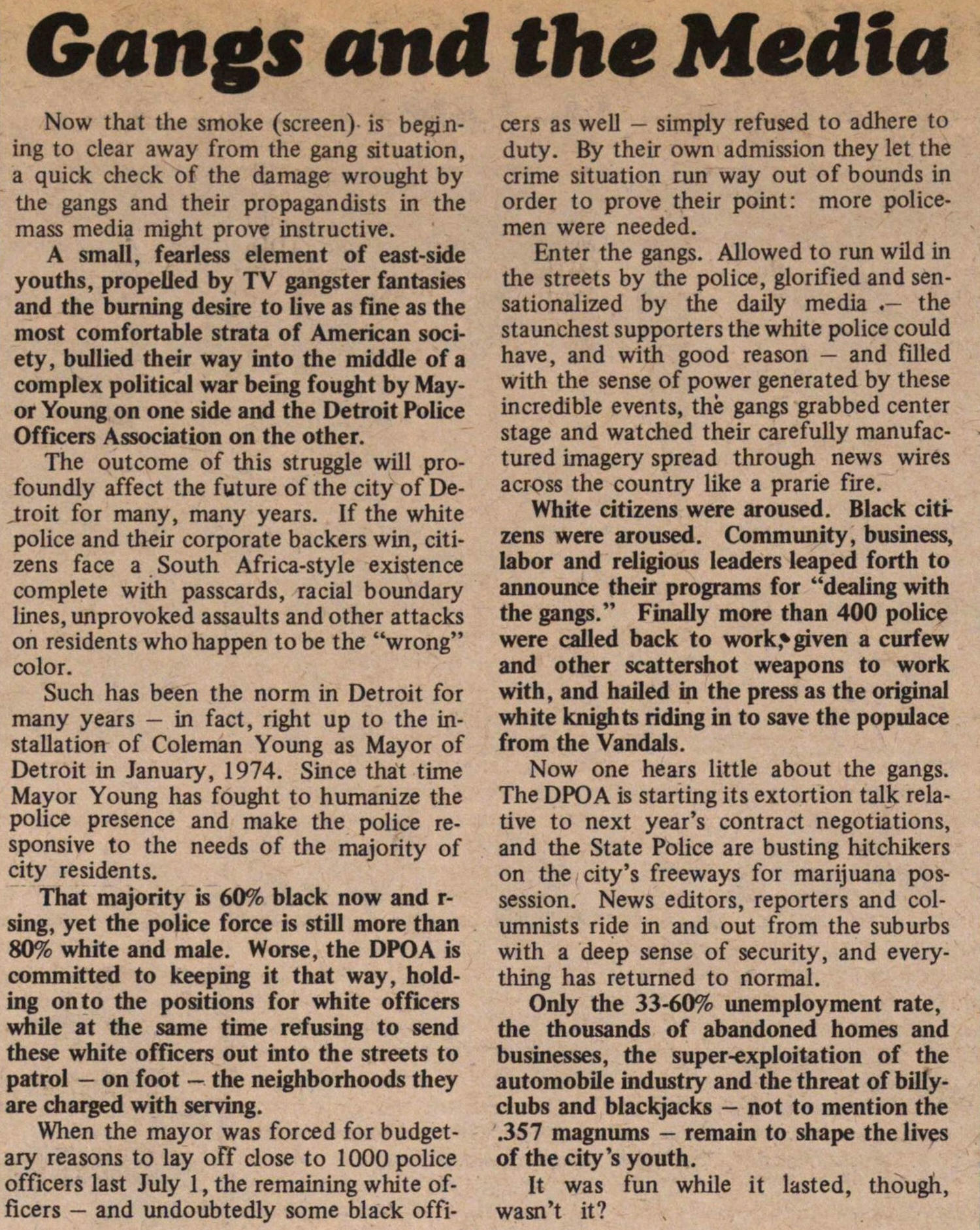 Now that the smoke (screen) is beginning to clear away from the gang situation, a quick check of the damage wrought by the gangs and their propagandists in the mass media might prove instructive.

A small, fearless element of east-side youths, propelled by TV gangster fantasies and the burning desire to live as fine as the most comfortable strata of American society, bullied their way into the middle of a complex political war being fought by Mayor Young on one side and the Detroit Police Officers Association on the other.

The outcome of this struggle will profoundly affect the future of the city of Detroit for many, many years. If the white police and their corporate backers win, citizens face a South Africa-style existence complete with passcards, racial boundary lines, unprovoked assaults and other attacks on residents who happen to be the "wrong" color.

Such has been the norm in Detroit for many years - in fact, right up to the installation of Coleman Young as Mayor of Detroit in January, 1974. Since that time Mayor Young has fought to humanize the police presence and make the police responsive to the needs of the majority of city residents.

That majority is 60% black now and rising, yet the police force is still more than 80% white and male. Worse, the DPOA is committed to keeping it that way, holding onto the positions for white officers while at the same time refusing to send these white officers out into the streets to patrol - on foot - the neighborhoods they are charged with serving.

When the mayor was forced for budgetary reasons to lay off close to 1000 police officers last July 1, the remaining white officers - and undoubtedly some black officers as well - simply refused to adhere to duty. By their own admission they let the crime situation run way out of bounds in order to prove their point: more policemen were needed.

Enter the gangs. Allowed to run wild in the streets by the police, glorified and sensationalized by the daily media .- the staunchest supporters the white police could have, and with good reason - and filled with the sense of power generated by these incredible events, the gangs grabbed center stage and watched their carefully manufactured imagery spread through news wires across the country like a prarie fire.

White citizens were aroused. Black citizens were aroused. Community, business, labor and religious leaders leaped forth to announce their programs for "dealing with the gangs." Finally more than 400 police were called back to work, given a curfew and other scattershot weapons to work with, and hailed in the press as the original white knights riding in to save the populace from the Vandals.

Now one hears little about the gangs. The DPOA is starting its extortion talk relative to next year's contract negotiations, and the State Police are busting hitchikers on the city's freeways for marijuana possession. News editors, reporters and columnists ride in and out from the suburbs with a deep sense of security, and everything has returned to normal.

Only the 33-60% unemployment rate, the thousands of abandoned homes and businesses, the super-exploitation of the automobile industry and the threat of billy-clubs and blackjacks - not to mention the .357 magnums - remain to shape the lives of the city's youth.

It was fun while it lasted, though, wasn't it?