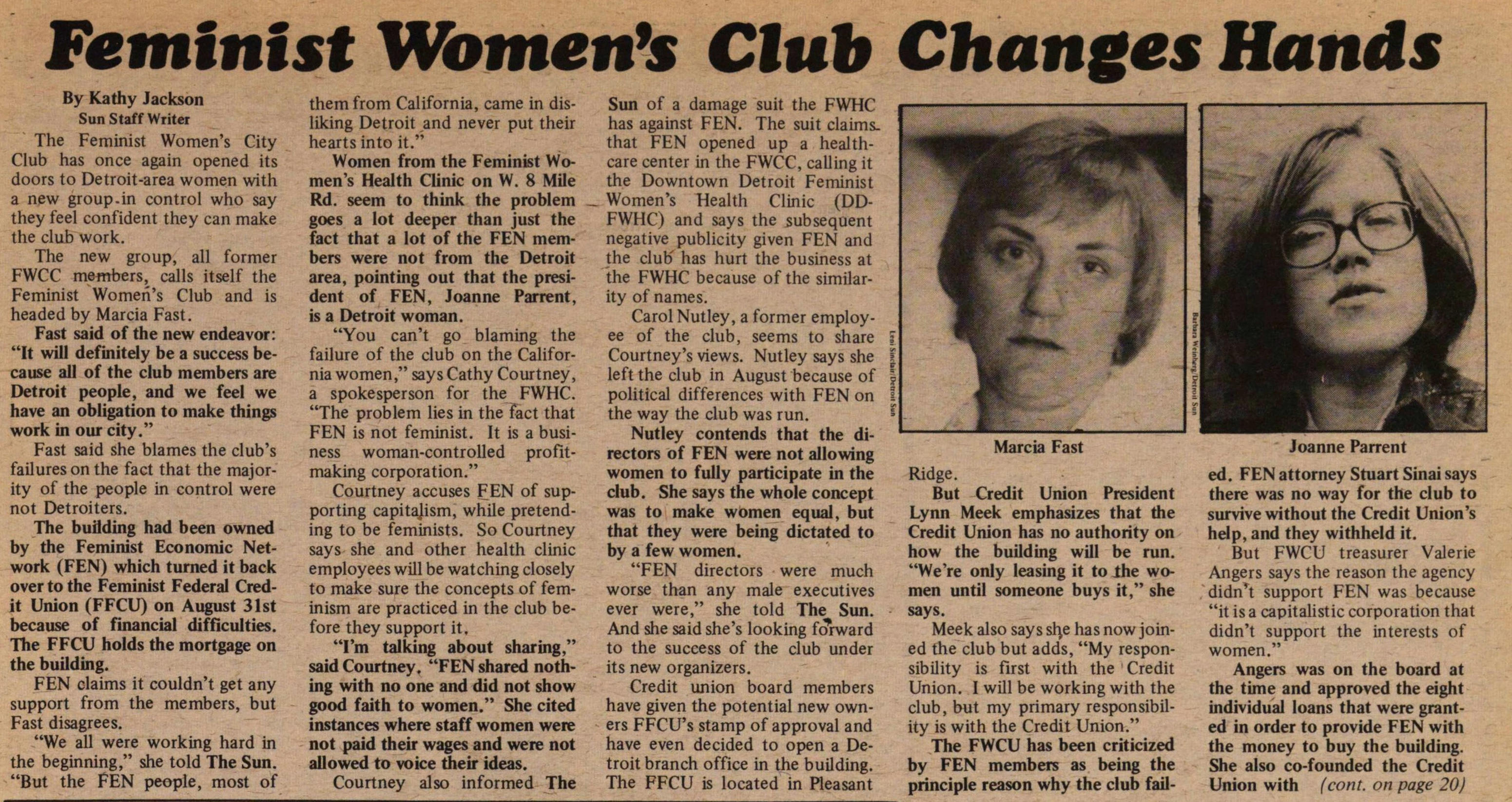 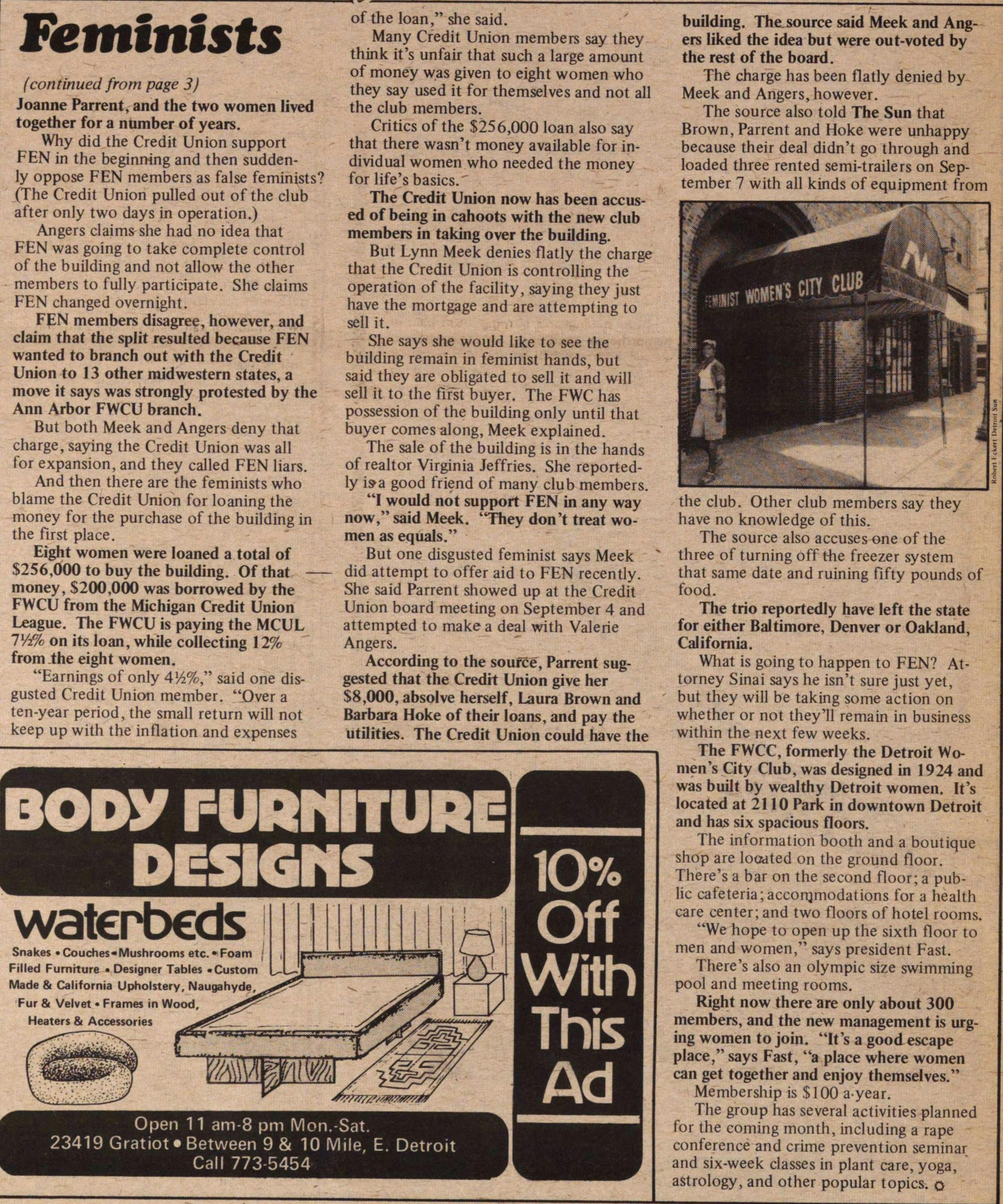 The Feminist Women's City Club has once again opened its doors to Detroit-area women with a new group-in control who say they feel confident they can make the club work.

The new group, all former FWCC members, calls itself the Feminist Women's Club and is headed by Marcia Fast.

Fast said of the new endeavor: "It will definitely be a success because all of the club members are Detroit people, and we feel we have an obligation to make things work in our city."

Fast said she blames the club's failures on the fact that the majority of the people in control were not Detroiters.

The building had been owned by the Feminist Economie Network (FEN) which turned it back over to the Feminist Federal Credit Union (FFCU) on August 31st because of financial difficulties. The FFCU holds the mortgage on the building.

FEN claims it couldn't get any support from the members, but Fast disagrees.

"We all were working hard in the beginning," she told The Sun. "But the FEN people, most of them from California, came in disliking Detroit and never put their hearts into it."

Women from the Feminist Women's Health Clinic on W. 8 Mile Rd. seem to think the problem goes a lot deeper than just the fact that a lot of the FEN members were not from the Detroit area, pointing out that the president of FEN, Joanne Parrent, is a Detroit woman.

"You can't go blaming the failure of the club on the California women," says Cathy Courtney, a spokesperson for the FWHC. "The problem lies in the fact that FEN is not feminist. It is a business woman-controlled profitmaking corporation."

Courtney accuses FEN of supporting capitalism while pretending to be feminists. So Courtney says she and other health clinic employees will be watching closely to make sure the concepts of feminism are practiced in the club before they support it.

I'm talking about sharing," said Courtney. "FEN shared nothing with no one and did not show good faith to women." She cited instances where staff women were not paid their wages and were not allowed to voice their ideas.

Courtney also informed The Sun of a damage suit the FWHC has against FEN. The suit claims. that FEN opened up a healthcare center in the FWCC, calling it the Downtown Detroit Feminist Women's Health Clinic (DDFWHC), and says the subsequent negative publicity given FEN and the club has hurt the business at the FWHC because of the similarity of names.

Carol Nutley, a former employee of the club, seems to share Courtney's views. Nutley says she left the club in August because of political differences with FEN on the way the club was run.

Nutley contends that the directors of FEN were not allowing women to fully particípate ín the club. She says the whole concept was to make women equal, but that they were being dictated to by a few women.

"FEN directors were much worse than any male executives ever were," she told The Sun. And she said she's looking forward to the success of the club under its new organizers.

Credit union board members have given the potential new owners FFCU's stamp of approval and have even decided to open a Detroit branch office in the building. The FFCU is located in Pleasant Ridge.

But Credit Union President Lynn Meek emphasizes that the Credit Union has no authoríty on how the building will be run. "We 're only leasing it to the women until someone buys it," she says.

The FWCU has been criticized by FEN members as being the principal reason why the club ended. FEN attorney Stuart Sinai says there was no way for the club to survive without the Credit Union's help, and they withheld it.

But FWCU treasurer Valerie Angers says the reason the agency didn't support FEN was because "it is a capitalistic corporation that didn't support the interests of women."

Angers was on the board at the time and approved the eight individual loans that were granted in order to provide FEN with the money to buy the building. She also co-founded the Credit Union with Feminists Joanne Parrent, and the two women lived together for a number of years.

Why did the Credit Union support FEN in the beginning and then suddenly oppose FEN members as false feminists? (The Credit Union pulled out of the club after only two days in operation.)

Angers claims she had no idea that FEN was going to take complete control of the building and not allow the other members to fully particípate. She claims FEN changed overnight.

FEN members disagree, however, and claim that the split resulted because FEN wanted to branch out with the Credit Union to 13 other mid-western states, a move it says was strongly protested by the Ann Arbor FWCU branch.

But both Meek and Angers deny that charge, saying the Credit Union was all for expansion, and they called FEN liars.

And then there are the feminists who blame the Credit Union for loaning the money for the purchase of the building in the first place.

"Earnings of only 41/4%," said one disgusted Credit Union member. "Over a ten-year period, the small return will not keep up with the inflation and expenses of the loan," she said.

Many Credit Union members say they think it's unfair that such a large amount of money was given to eight women who they say used it for themselves and not all the club members.

Critics of the $256,000 loan also say that there wasn't money available for individual women who needed the money for life's basics.

The Credit Union now has been accused of being in cahoots with the new club members in taking over the building.

But Lynn Meek denies flatly the charge that the Credit Union is controlling the operation of the facility, saying they just have the mortgage and are attempting to sell it.

She says she would like to see the building remain in feminist hands, but said they are obligated to sell it and will sell it to the first buyer. The FWC has possession of the building only until that buyer comes along, Meek explained.

The sale of the building is in the hands of realtor Virginia Jeffries. She reportedly is a good friend of many club members. "I would not support FEN in any way now," said Meek. "They don't treat women as equals."

But one disgusted feminist says Meek did attempt to offer aid to FEN recently. She said Parrent showed up at the Credit Union board meeting on September 4 and attempted to make a deal with Valerie Angers.

According to the source, Parrent suggested that the Credit Union give her $8,000, absolve herself, Laura Brown, and Barbara Hoke of their loans, and pay the Utilities. The Credit Union could have the building.

The source said Meek and Angers liked the idea but were out-voted by the rest of the board. The charge has been flatly denied by Meek and Angers, however. The source also told The Sun that Brown, Parrent, and Hoke were unhappy because their deal didn't go through and loaded three rented semi-trailers on September 7 with all kinds of equipment from the club. Other club members say they have no knowledge of this.

The source also accuses one of the three of turning off the freezer system that same date and ruining fifty pounds of food.

The trio reportedly has left the state for either Baltimore, Denver, or Oakland, California.

What is going to happen to FEN? Attorney Sinai says he isn't sure just yet, but they will be taking some action on whether or not they'll remain in business within the next few weeks.

The FWCC, formerly the Detroit Women's City Club, was designed in 1924 and was built by wealthy Detroit women. It's located at 21 10 Park in downtown Detroit and has six spacious floors.

The information booth and a boutique shop are located on the ground floor. There's a bar on the second floor; a public cafetería; accommodations for a health care center; and two floors of hotel rooms. "We hope to open up the sixth floor to men and women," says president Fast.

Right now there are only about 300 members, and the new management is urging women to join. "It's a good escape place," says Fast, "a place where women can get together and enjoy themselves."

Membership is $100 a year. The group has several activities planned for the coming month, including a rape conference and crime prevention seminar and six-week classes in plant care, yoga, astrology, and other popular topics.