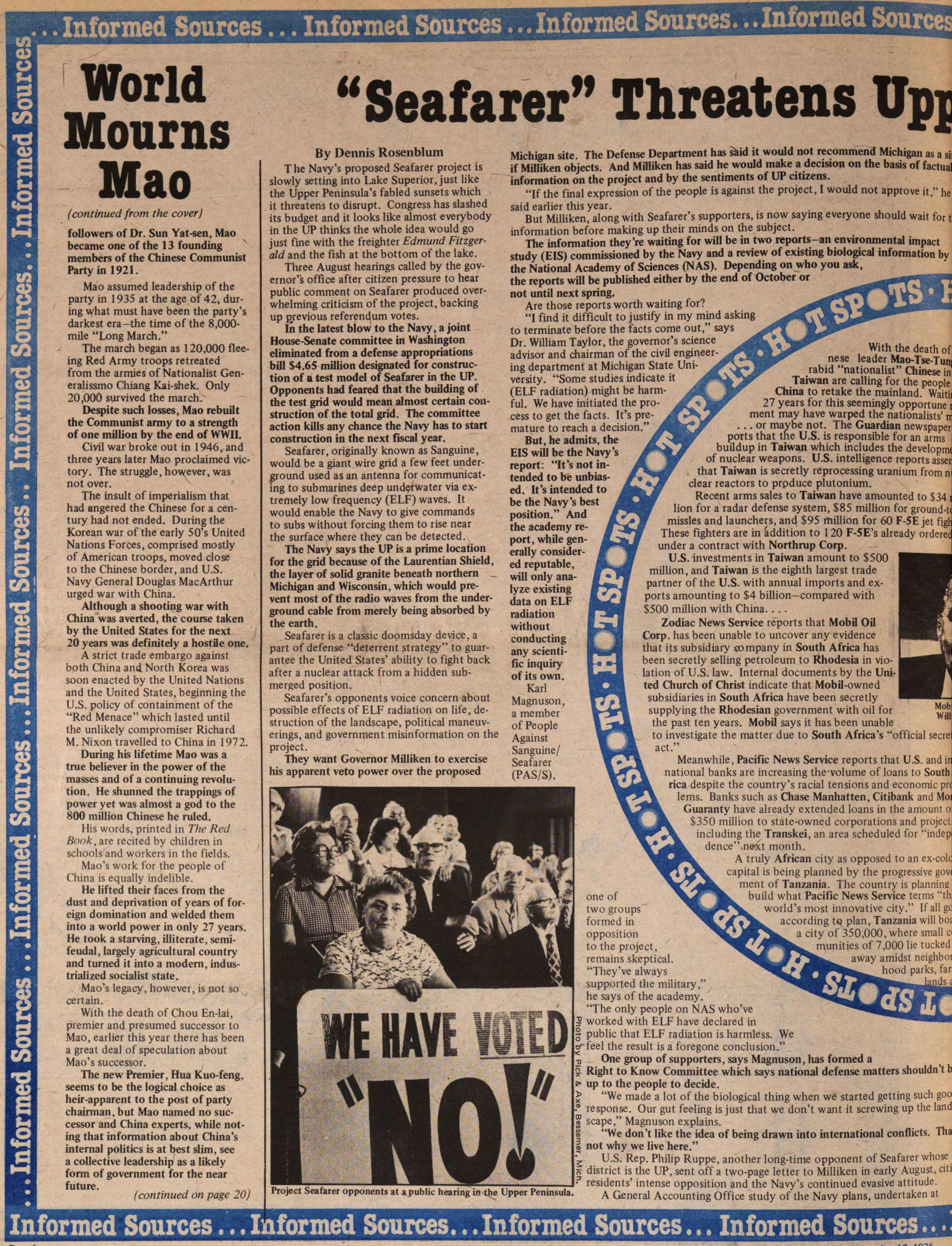 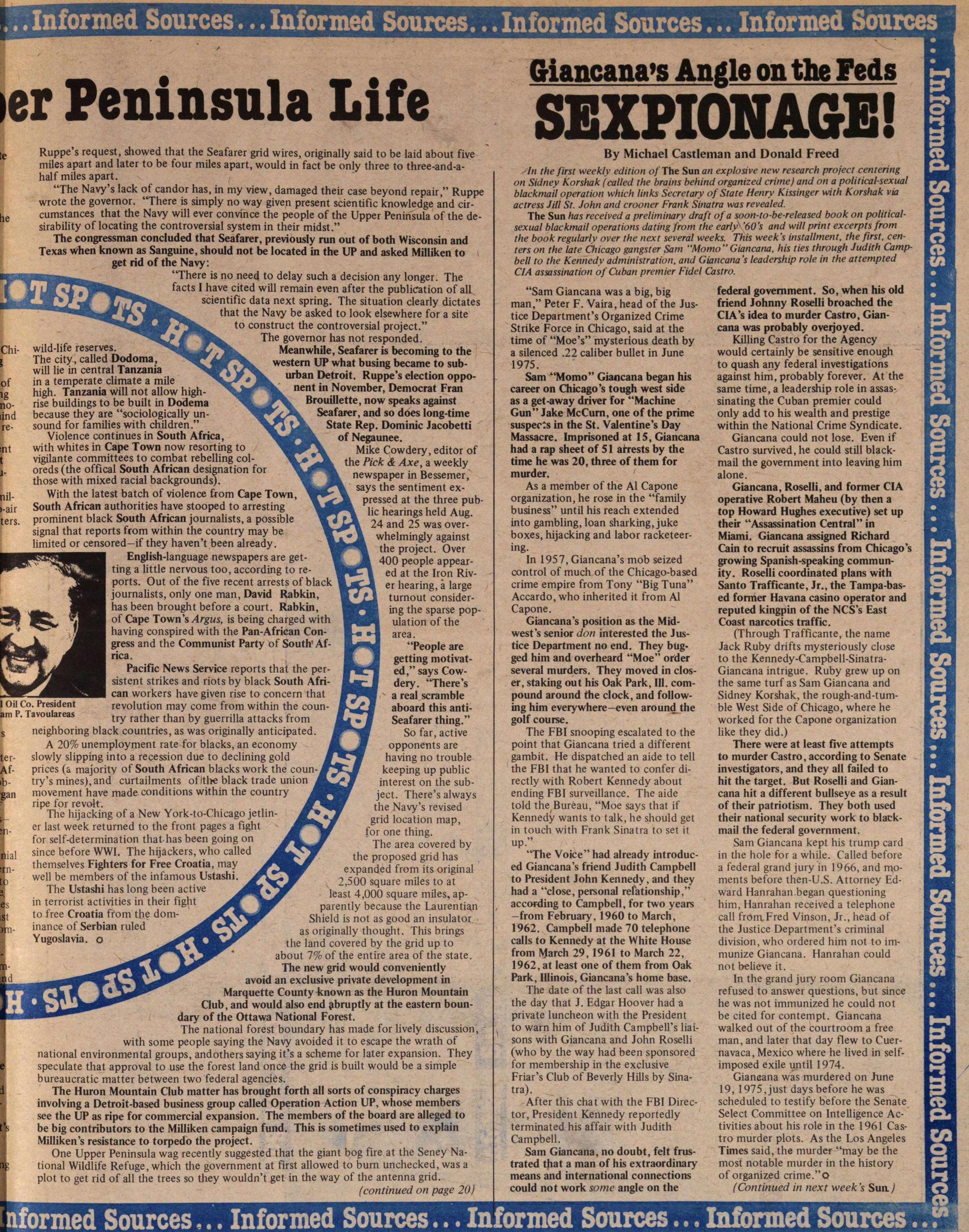 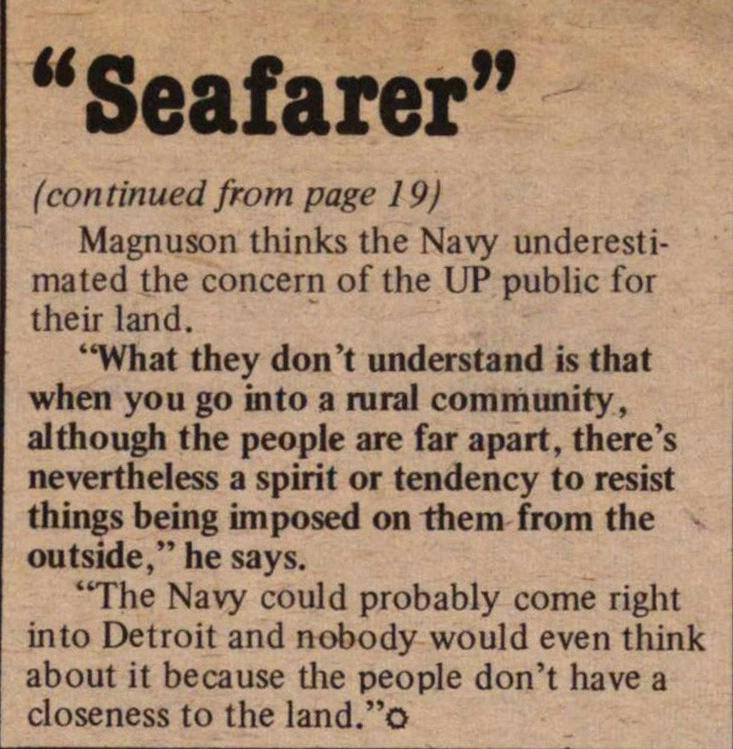 The Navy's proposed Seafarer project is slowly setting into Lake Superior, just like the Upper Peninsula's fabled sunsets which it threatens to disrupt. Congress has slashed its budget and it looks like almost everybody in the UP thinks the whole idea would go just fine with the freighter Edmund Fitzgerald and the fish at the bottom of the lake.

In the latest blow to the Navy, a joint House-Senate committee in Washington eliminated from a defense appropriations bill $4.65 million designated for construction of a test model of Seafarer in the UP. Opponents had feared that the building of the test grid would mean almost certain construction of the total grid. The committee action kills any chance the Navy has to start construction in the next fiscal year.

Seafarer, originally known as Sanguine, would be a giant wire grid a few feet underground used as an antenna for communicating to submarines deep underwater via extremely low frequency (ELF) waves. It would enable the Navy to give commands to subs without forcing them to rise near the surface where they can be detected.

The Navy says the UP is a prime location for the grid because of the Laurentian Shield, the layer of solid granite beneath northern Michigan and Wisconsin, which would prevent most of the radio waves from the underground cable from merely being absorbed by the earth.

Seafarer is a classic doomsday device, a part of defense "deterrent strategy" to guarantee the United States' ability to fight back after a nuclear attack from a hidden submerged position.

Seafarer's opponents voice concern about possible effects of ELF radiation on life, destruction of the landscape, political maneuverings, and government misinformation on the project.

They want Governor Milliken to exercise his apparent veto power over the proposed Michigan site. The Defense Department has said it would not recommend Michigan as a site if Milliken objects. And Milliken has said he would make a decision on the basis of factual information on the project and by the sentiments of UP citizens.

"If the final expression of the people is against the project, I would not approve it," he said earlier this year.

But Milliken, along with Seafarer's supporters, is now saying everyone should wait for the information before making up their minds on the subject.

The information they're waiting for will be in two reports-an environmental impact study (EIS) commissioned by the Navy and a review of existing biological information by the National Academy of Sciences (NAS). Depending on who you ask, the reports will be published either by the end of October or not until next spring.

Are those reports worth waiting for? "I find it difficult to justify in my mind asking to terminate before the facts come out," says Dr. William Taylor the governor's science advisor and chairman of the civil engineering department at Michigan State University. "Some studies indicate it (ELF radiation) might be harmful. We have initiated the process to get the facts. It's premature to reach a decision.'

But, he admits, the EIS will be the Navy's report: "It's not intended to be unbiased.  It's intended to be the Navy's best position." And the academy report, while generally considered reputable, will only analyze existing data on ELF radiation without conducting any scientific inquiry of it's own.

Karl Magnuson, a member of People Against Sanguine m Seafarer (PAS/S), one of two groups formed in opposition to the project, remains skeptical. "They've always supported the military," he says of the academy. "The only people on NAS who've worked with ELF have declared in public that ELF radiation is harmless. We feel the result is a foregone conclusion."

One group of supporters, says Magnuson, has formed a Right to Know Committee which says national defense matters shouldn't be up to the people to decide.

"We made a lot of the biological thing when we started getting such gut response. Our gut feeling is just that we don't want it screwing up the landscape," Magnuson explains.

"We don't like the idea of being drawn into international conflicts. That's not why we live here."

U.S. Rep. Philip Ruppe, another long-time opponent of Seafarer whose district is the UP, sent off a two-page letter to Milliken in early August, citing residents' intense opposition and the Navy's continued evasive attitude.

A General Accounting Office study of the Navy plans, undertaken at Ruppe's request, showed that the Seafarer grid wires, originally said to be laid about five miles apart and later to be four miles apart, would in fact be only three to three-and-a-half miles apart.

"The Navy's lack of candor has, in my view, damaged their case beyond repair," Ruppe wrote the governor.  "There is simply no way given present scientific knowledge and circumstances that the Navy will ever convince the people of the Upper Peninsula of the desirability of locating the controversial system the midst."

The congressman concluded that Seafarer, previously run out of both Wisconsin and Texas when known as Sanguine, should not be located in the UP and asked Milliken to get rid of the Navy:

"There is no need to delay such a decision any longer. The facts I have cited will remain even after the publication of all scientific data next spring.  The situation clearly dictates that the Navy be asked to look elsewhere for a site to construct the controversial project"

The governor has not responded.

Meanwhile, Searfarer is becoming to the western UP what busing became to suburban Detroit. Ruppe's election opponent in November, Democrat Fran Brouillette, now speaks against Seafarer, and so does long-time State Rep. Dominic Jacobetti of Negaunee.

Mike Cowdery, editor of the Pick & Axe, a weekly newspaper in Bessemer, says the sentiment expressed at the three public hearings held Aug. 24 and 25 was overwhelming against the project. Over 400 people appeared at the Iron River hearing, a large turnout considering the sparse population of the area.

"People are getting motivated" says Cowdery.  "There's areal scramble aboard this anti-Seafarer thing"

So far, active opponents are having no trouble keeping up public interest on the subject.  There's always the Navy's revised grid location map, for one thing.

The area covered by the proposed grid has expanded from it's original 2,500 square miles, apparently because the Laurentian Shield is not as good an insulator as originally thought. This brings the land covered by the grid up to about 7% of the entire area of the state.

The new grid would conveniently avoid an exclusive private development in Marquette County known as the Huron Mountain Club, and would also end abruptly at the eastern boundaries of the Ottawa National Forest.

The national forest boundary has made for lively discussion with some people saying the Navy avoided it to escape the wrath of national environmental groups, and others saying it's a scheme for later expansion. They speculate that approval to use the forest land once the grid is built would be a simple bureaucratic matter between two federal agencies.

The Huron Mountain Club matter has brought forth all sorts of conspiracy charges involving a Detroit-based business group called Operation Action UP, whose members see the UP as ripe for commercial expansion. The members of the board are alleged to be big contributors to the Milliken campaign fund.  This is sometimes used to explain MIlliken's resistance to torpedo the project.

One Upper Peninsula wag recently suggested that the giant bog fire at the Seney National Wildlife refuge, which the government at first allowed to burn unchecked, was a plot to get rid of all the trees so they wouldn't get in the way of the antenna grid.

Magnuson thinks the Navy underestimated the concern of the UP public for their land.

"What they don't understand is that when you go into a rural community, although the people are far apart, there's nevertheless a spirit or tendency to resit things being imposed on them from the outside," he says.

"The Navy could probably come right into Detroit and nobody would even think about it because the people don't have a closeness to the land."