Vibes From The Tribe Phil Ranelin 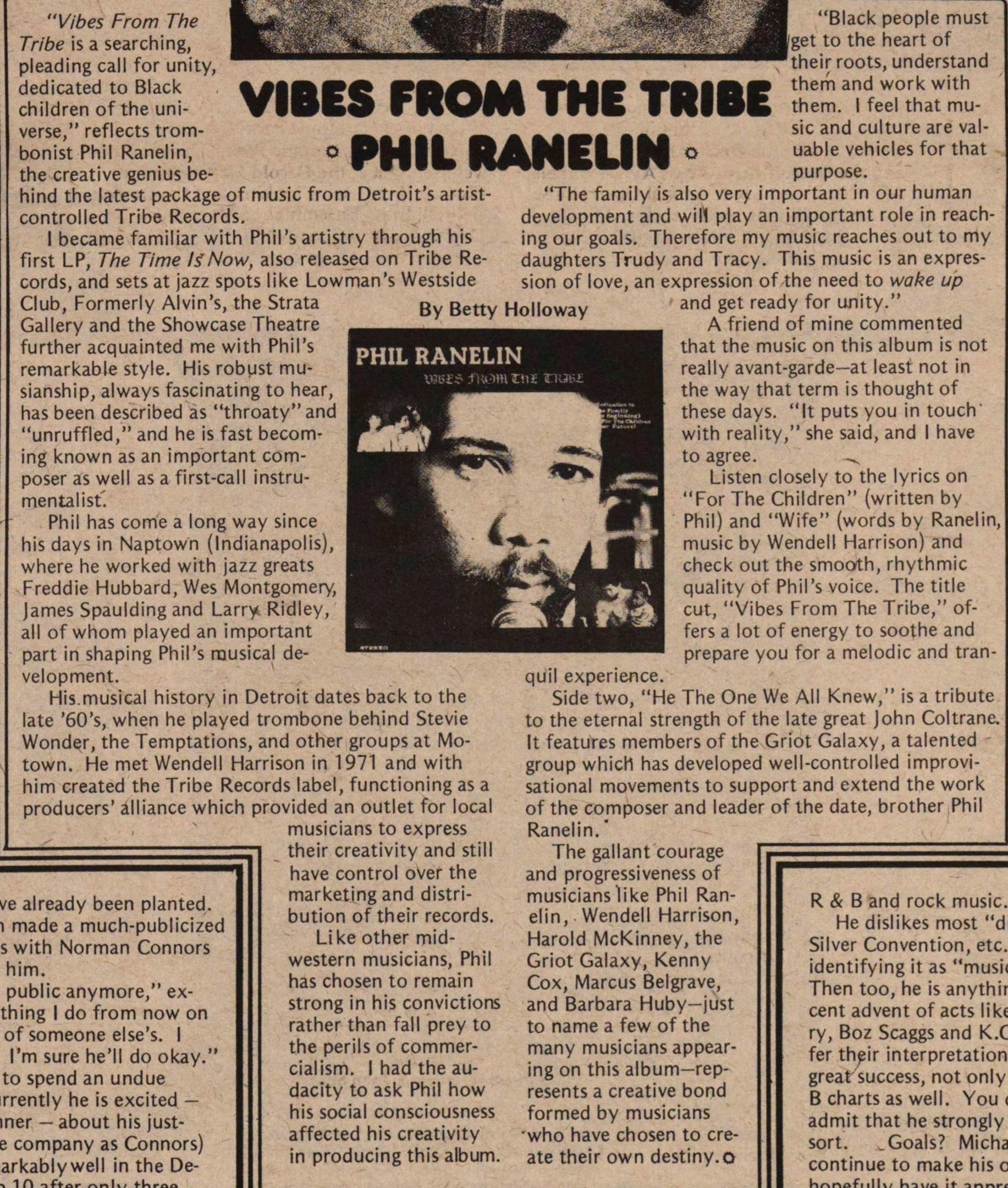 "Vibes From The Tribe is a searching, pleading call for unity, dedicated to Black children of the universe," reflects trombonist Phil Ranelin, the creative genius behind the latest package of music from Detroit s artist controlled Tribe Records.

I became familiar with Phil's artistry through his first LP, Time Is Now, also released on Tribe Records, and sets at jazz spots like Lowman's Westside Club, Formerly Alvin's, the Strata Gallery and the Showcase Theatre further acquainted me with Phil's remarkable style. His robust musianship, always fascinating to hear, has been described as "throaty" and "unruffled," and he is fast becoming known as an important composer as well as a first-call instrumentalist.

Phil has come a long way since his days in Naptown (Indianapolis), where he worked with jazz greats Freddie Hubbard, Wes Montgomery, James Spaulding and Larry Ridley, all of whom played an important part in shaping Phil's musical development.

His musical history in Detroit dates back to the late '60's, when he played trombone behind Stevie Wonder, the Temptations, and other groups at Motown. He met Wendell Harrison in 1971 and with him created the Tribe Records label, functioning as a producers' alliance which provided an outlet for local musicians to express their creativity and still have control over the marketing and distribution of their records.

Like other midwestern musicians, Phil has chosen to remain strong in his convictions rather than fall prey to the perils of commercialism. I had the audacity to ask Phil how his social consciousness affected his creativity in producing this album.

"Black people must get to the heart of their roots, understand them and work with them. I feel that music and culture are valuable vehicles for that purpose.

"The family is also very important n our human development and will play an important role in reaching our goals. Therefore my music reaches out to my daughters Trudy and Tracy. This music is an expression of love, an expression of the need to wake up and get ready for unity."

A friend of mine commented that the music on this album is not really avant-garde- at least not in the way that term is thought of these days. "It puts you in touch' with reality," she said, and I have to agree.

Listen closely to the lyrics on "For The Children" (written by Phil) and "Wife" (words by Ranelin, music by Wendell Harrison) and check out the smooth, rhythmic quality of Phil's voice. The title cut, "Vibes From The Tribe," offers a lot of energy to soothe and prepare you for a melodic and tranquil experience.

Side two, "He The One We All Knew," is a tribute to the eternal strength of the late great John Coltrane. It features members of the Griot Galaxy, a talented group which has developed well-controlled improvisational movements to support and extend the work of the composer and leader of the date, brother Phil Ranelin.

The gallant courage and progressiveness of musicians like Phil Ranelin, Wendell Harrison, Harold McKinney, the Griot Galaxy, Kenny Cox, Marcus Belgrave, and Barbara Huby-just to name a few of the many musicians appearing on this album- represents a creative bond formed by musicians who have chosen to create their own destiny.