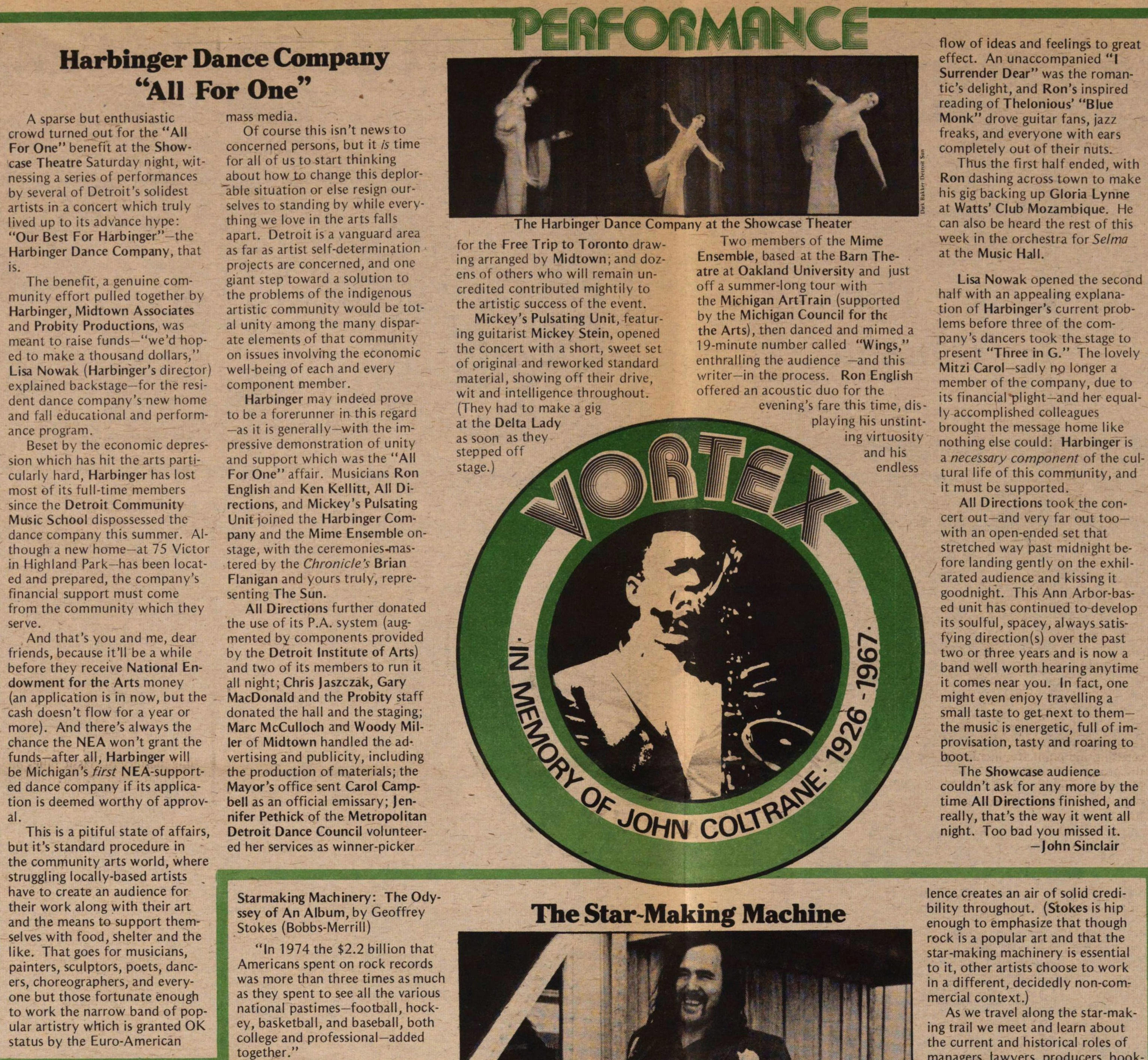 Harbinger Dance Company "All For One"

A sparse but enthusiastic crowd turned out for the "All For One" benefit at the Showcase Theatre Saturday night, witnessing a series of performances by several of Detroit's solidest artists in a concert which truly lived up to ts advance hype: "Our Best For Harbinger"-the Harbinger Dance Company, that is.

Beset by the economic depression which has hit the arts particularly hard, Harbinger has lost most of ts full-time members since the Detroit Community Music School dispossessed the dance company this summer. Although a new home- at 75 Victor in High land Park- has been located and prepared, the company's financial support must come from the community which they serve.     And that's you and me, dear friends, because it'll be a while before they receive National Endowment for the Arts money (an application is n now, but the cash doesn't flow for a year or more). And there's always the chance the NEA won 't grant the funds- after all, Harbinger will be Michigan 's first NEA-supported dance company if it's application is deemed worthy of approval.

This is a pitiful state of affairs, but it's standard procedure n the community arts world, where struggling locally-based artists have to create an audience for their work along with their art and the means to support themselves with food, shelter and the like. That goes for musicians, painters, sculptors, poets, dancers, choreographers, and everyone but those fortunate enough to work the narrow band of popular artistry which is granted OK status by the Euro-American mass media.

Of course this isn't news to concerned persons, but it is time for all of us to start thinking about how to change this deplorable situation or else resign ourselves to standing by while everything we love in the arts falls apart. Detroit is a vanguard area as far as artist self-determination projects are concerned, and one giant step toward a solution to the problems of the indigenous artistic community would be total unity among the many disparate elements of that community on issues involving the economic well-being of each and every component member.

Harbinger may indeed prove to be a forerunner in this regard -as it is generally- with the impressive demonstration of unity and support which was the "All For One" affair. Musicians Ron English and Ken Kellitt, All Directions, and Mickey's Pulsating Unit joined the Harbinger Company and the Mime Ensemble onstage, with the ceremonies-mastered by the Chronicle's Brian Flanigan and yours truly, representing The Sun.

All Directions further donated the use of its P.A. system (augmented by components provided by the Detroit Institute of Arts) and two of its members to run it all night; Chris Jaszczak, Gary MacDonald and the Probity staff donated the hall and the staging; Marc McCulloch and Woody Miller of Midtown handled the advertising and publicity, including the production of materials; the Mayor's office sent Carol Campbell as an official emissary; Jennifer Pethick of the Metropolitan Detroit Dance Council volunteered her services as winner-picker for the Free Trip to Toronto drawing arranged by Midtown; and dozens of others who will remain uncredited contributed mightily to the artistic success of the event.

Mickey's Pulsating Unit, featuring guitarist Mickey Stein, opened the concert with a short, sweet set of original and reworked standard material, showing off their drive, wit and intelligence throughout. (They had to make a gig at the Delta Lady as soon as they stepped off stage.)

Two members of the Mime Ensemble, based at the Barn Theatre at Oakland University and just off a summer-long tour with the Michigan ArtTrain (supported by the Michigan Council for the the Arts), then danced and mimed a 19-minute number called "Wings," enthralling the audience -and this writer- in the process. Ron English offered an acoustic duo for the evening's fare this time, playing his unstinting virtuosity and his endless flow of ideas and feelings to great effect. An unaccompanied "I Surrender Dear" was the romantic's delight, and Ron's inspired reading of Thelonious' "Blue Monk" drove guitar fans, jazz freaks, and everyone with ears completely out of their nuts.

Thus the first half ended, with Ron dashing across town to make his gig backing up Gloria Lynne at Watts' Club Mozambique. He can also be heard the rest of this week in the orchestra for Selma at the Music Hall.

Lisa Nowak opened the second half with an appealing explanation of Harbinger's current problems before three of the company's dancers took the stage to present "Three in G." The lovely Mitzi Carol- sadly no longer a member of the company, due to its financial plight- and her equally accomplished colleagues brought the message home like nothing else could: Harbinger is a necessary component of the cultural life of this community, and it must be supported.

All Directions took the concert out- and very far out too- with an open-ended set that stretched way past midnight before landing gently on the exhilarated audience and kissing it goodnight. This Ann Arbor-based unit has continued to develop its soulful, spacey, always satisfying direction(s) over the past two or three years and is now a band well worth hearing anytime it comes near you. In fact, one might even enjoy travelling a small taste to get next to them- the music is energetic, full of improvisation, tasty and roaring to boot.

The Showcase audience couldn't ask for any more by the time All Directions finished, and really, that's the way it went all night. Too bad you missed it.