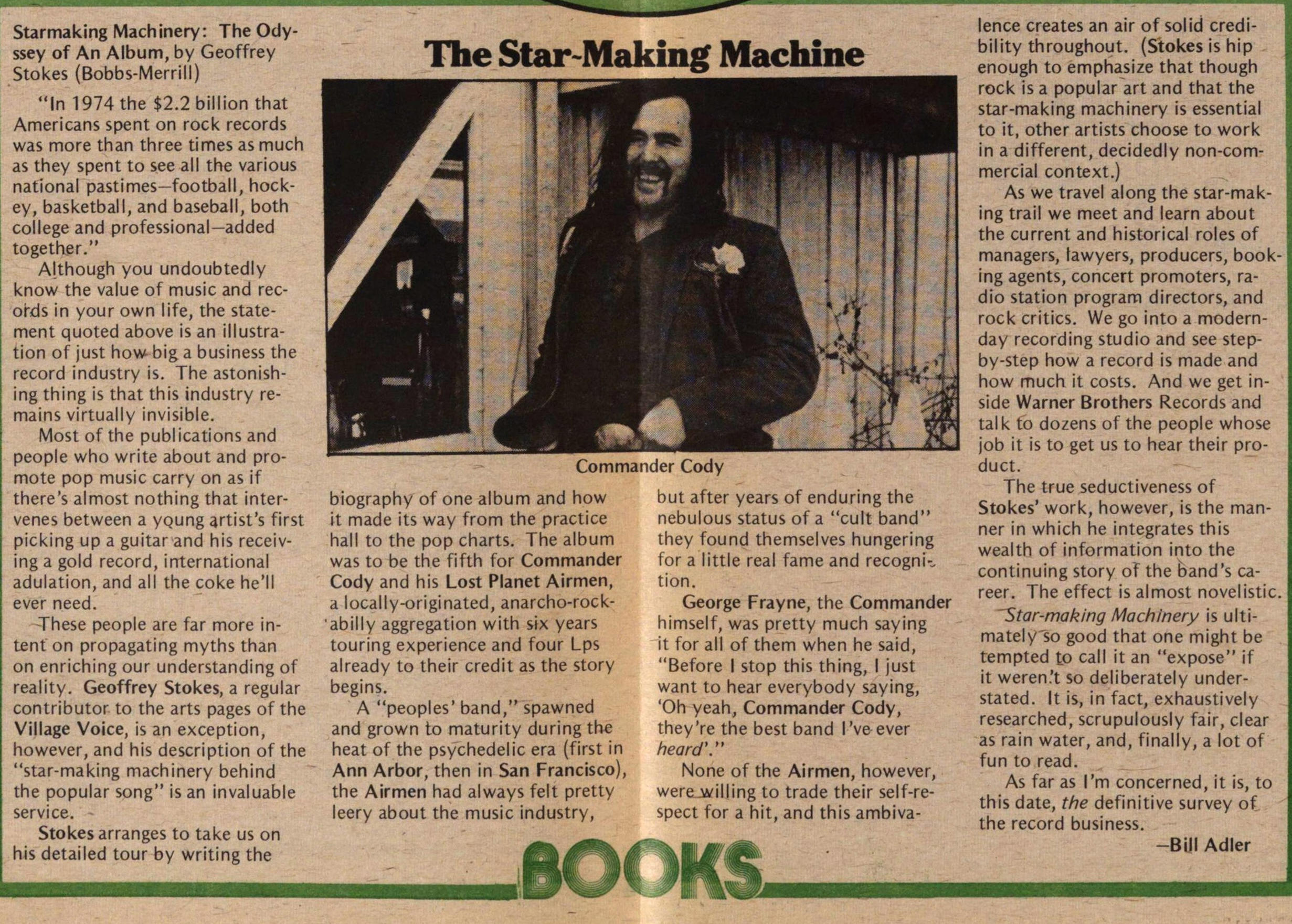 Starmaking Machinery: The Odyssey of An Album, by Geoffrey Stokes (Bobbs-Merrill)

"In 1974 the $2.2 billion that Americans spent on rock records was more than three times as much as they spent to see all the various national pastimes- football, hockey, basketball, and baseball, both college and professional- added together."

Although you undoubtedly know the value of music and records in your own life, the statement quoted above is an illustration of just how big a business the record industry is. The astonishing thing is that this industry remains virtually invisible.

Most of the publications and people who write about and promote pop music carry on as if there's almost nothing that intervenes between a young artist's first picking up a guitar and his receiving a gold record, international adulation, and all the coke he'll ever need.

These people are far more intent on propagating myths than on enriching our understanding of reality. Geoffrey Stokes, a regular contributor to the arts pages of the Village Voice, is an exception, however, and his description of the "star-making machinery behind the popular song" is an invaluable service.

Stokes arranges to take us on his detailed tour by writing the biography of one album and how it made its way from the practice hall to the pop charts. The album was to be the fifth for Commander Cody and his Lost Planet Airmen, a locally-originated, anarcho-rockabilly aggregation with six years touring experience and four Lps already to their credit as the story begins.

A "peoples' band," spawned and grown to maturity during the heat of the psychedelic era (first in Ann Arbor, then in San Francisco), the Airmen had always felt pretty leery about the music industry, but after years of enduring the nebulous status of a "cult band" they found themselves hungering for a little real fame and recognition. George Frayne, the Commander himself, was pretty much saying t for all of them when he said, "Before I stop this thing, I just want to hear everybody saying, 'Oh yeah, Commander Cody, they're the best band I've ever heard'."

None of the Airmen, however, were willing to trade their self-respect for a hit, and this ambivalence creates an air of solid credibility throughout. (Stokes is hip enough to emphasize that though rock is a popular art and that the star-making machinery is essential to other artists choose to work in a different, decidedly non-commercial context.)

As we travel along the star-making trail we meet and learn about the current and historical roles of managers, lawyers, producers, booking agents, concert promoters, radio station program directors, and rock critics. We go into a modern day recording studio and see step by-step how a record is made and how much it costs. And we get inside Warner Brothers Records and talk to dozens of the people whose job it is to get us to hear their product.

The true seductiveness of Stokes' work, however, is the manner in which he integrates this wealth of information into the continuing story of the band's career. The effect is almost novelistic.

Star-making Machinery is ultimately so good that one might be tempted to call it an "expose" if it weren't so deliberately understated. It's, in fact, exhaustively researched, scrupulously fair, clear as rain water, and, finally, a lot of fun to read.

As far as l'm concerned, it is, to this date, the definitive survey of the record business.