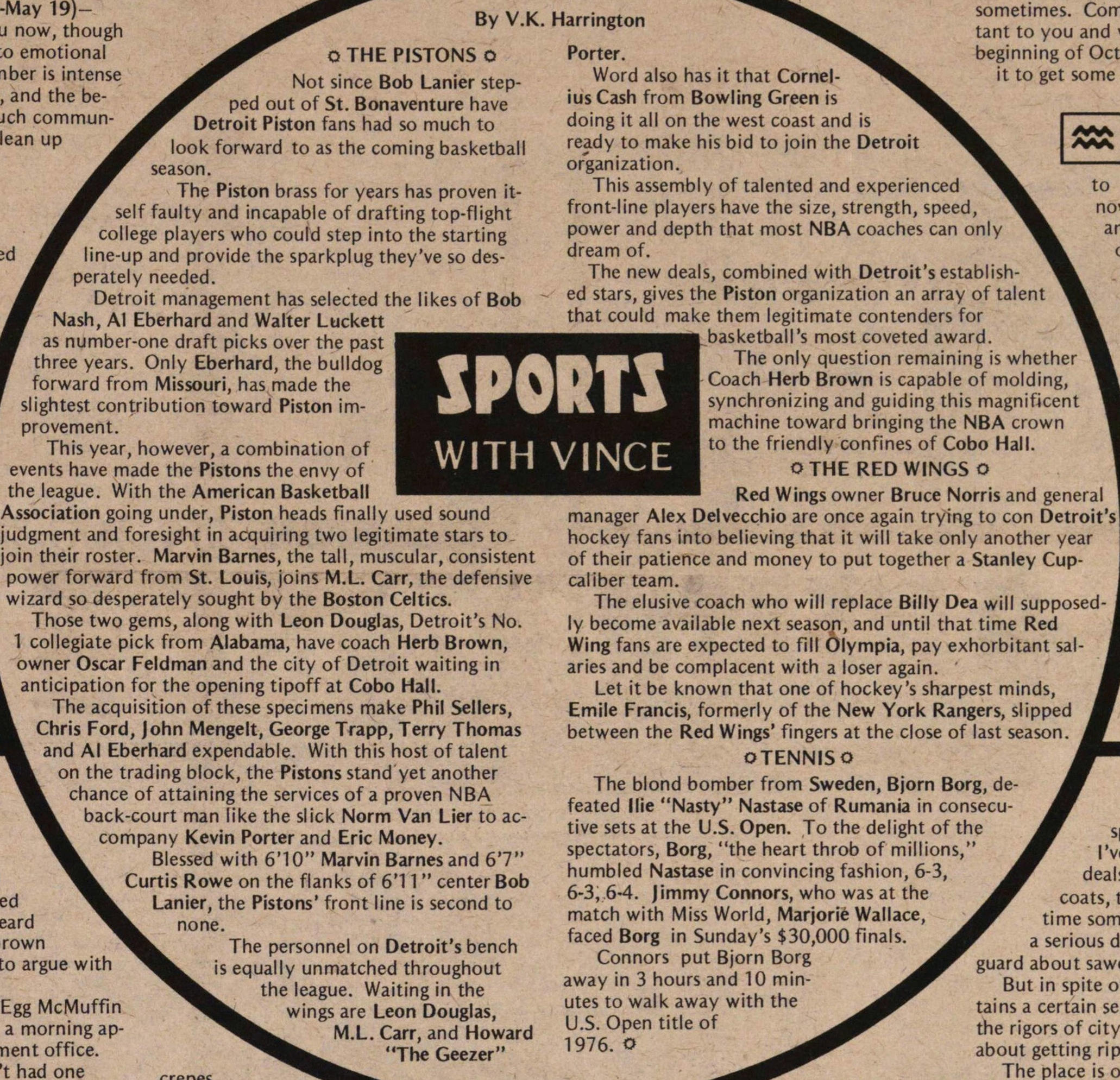 Not since Bob Lanier stepped out of St. Bonaventure have Detroit Piston fans had so much to look forward to as the coming basketball season.
The Piston brass for years has proven itself faulty and incapable of drafting top-flight college players who could step into the starting line-up and provide the sparkplug they've so desperately needed.
Detroit management has selected the likes of Bob Nash, Al Eberhard and Walter Luckett as number-one draft picks over the past three years. Only Eberhard, the bulldog forward from Missouri, has made the slightest contribution toward Piston improvement.
This year, however, a combination of events have made the Pistons the envy of the league. With the American Basketball Association going under, Piston heads finally used sound judgment and foresight in acquiring two legitimate stars to join their roster. Marvin Barnes, the tall, muscular, consistent power forward from St. Louis, joins M.L. Carr, the defensive wizard so desperately sought by the Boston Celtics. Those two gems, along with Leon Douglas, Detroit's No. 1 collegiate pick from Alabama, have coach Herb Brown, owner Oscar Feldman and the city of Detroit waiting in anticipation for the opening tipoff at Cobo Hall. The acquisition of these specimens make Phil Sellers, L Chris Ford, John Mengelt, George Trapp, Terry Thomas and Al Eberhard expendable. With this host of talent on the trading block, the Pistons stand yet another chance of attaining the services of a proven NBA back-court man like the slick Norm Van Lier to accompany Kevin Porter and Eric Money. Blessed with 6'10" Marvin Barnes and 6'7" Curtis Rowe on the flanks of 6'11" center Bob Lanier, the Pistons front line is second to none.
The personnel on Detroit's bench is equally unmatched throughout the league. Waiting in the wings are Leon Douglas, M.L. Carr, and Howard "The Geezer" Porter.
Word also has it that Cornelius Cash from Bowling Green is doing it all on the west coast and is ready to make his bid to join the Detroit organization.
This assembly of talented and experienced front-line players have the size, strength, speed, power and depth that most NBA coaches can only dream of.
The new deals, combined with Detroit's established stars, gives the Piston organization an array of talent that could make them legitimate contenders for basketball's most coveted award.
The only question remaining is whether Coach Herb Brown is capable of molding, synchronizing and guiding this magnificent machine toward bringing the NBA crown to the friendly confines of Cobo Hall.

Red Wings owner Bruce Norris and general manager Alex Delvecchio are once again trying to con Detroit's hockey fans into believing that it wilt take only another year of their patience and money to put together a Stanley Cup-caliber team. The elusive coach who will replace Billy Dea will supposedly become available next season, and until that time Red Wing fans are expected to fill Olympia, pay exorbitant salaries and be complacent with a loser again.
Let it be known that one of hockey's sharpest minds, Emile Francis, formerly of the New York Rangers, slipped between the Red Wings' fingers at the close of last season.

The blond bomber from Sweden, Bjorn Borg, defeated Ilie "Nasty" Nastase of Rumania in consecutive sets at the U.S. Open. To the delight of the spectators, Borg, "the heart throb of millions," humbled Nastase in convincing fashion, 6-3, 6-3, 6-4. Jimmy Connors, who was at the match with Miss World, Marjorie Wallace, faced Borg in Sunday's $30,000 finals.
Connors put Bjorn Borg away in 3 hours and 10 minutes to walk away with the U.S. Open title of 1976.