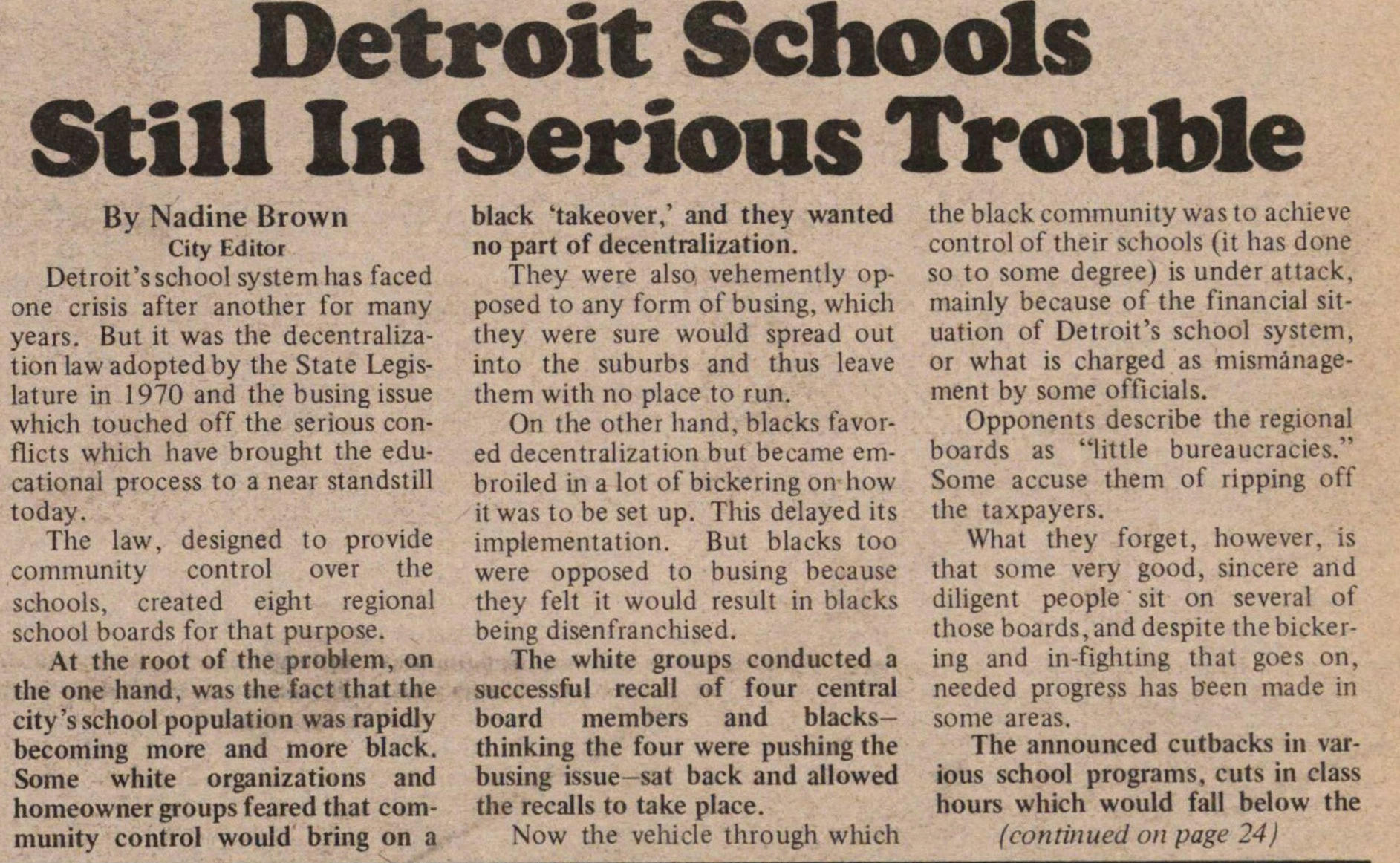 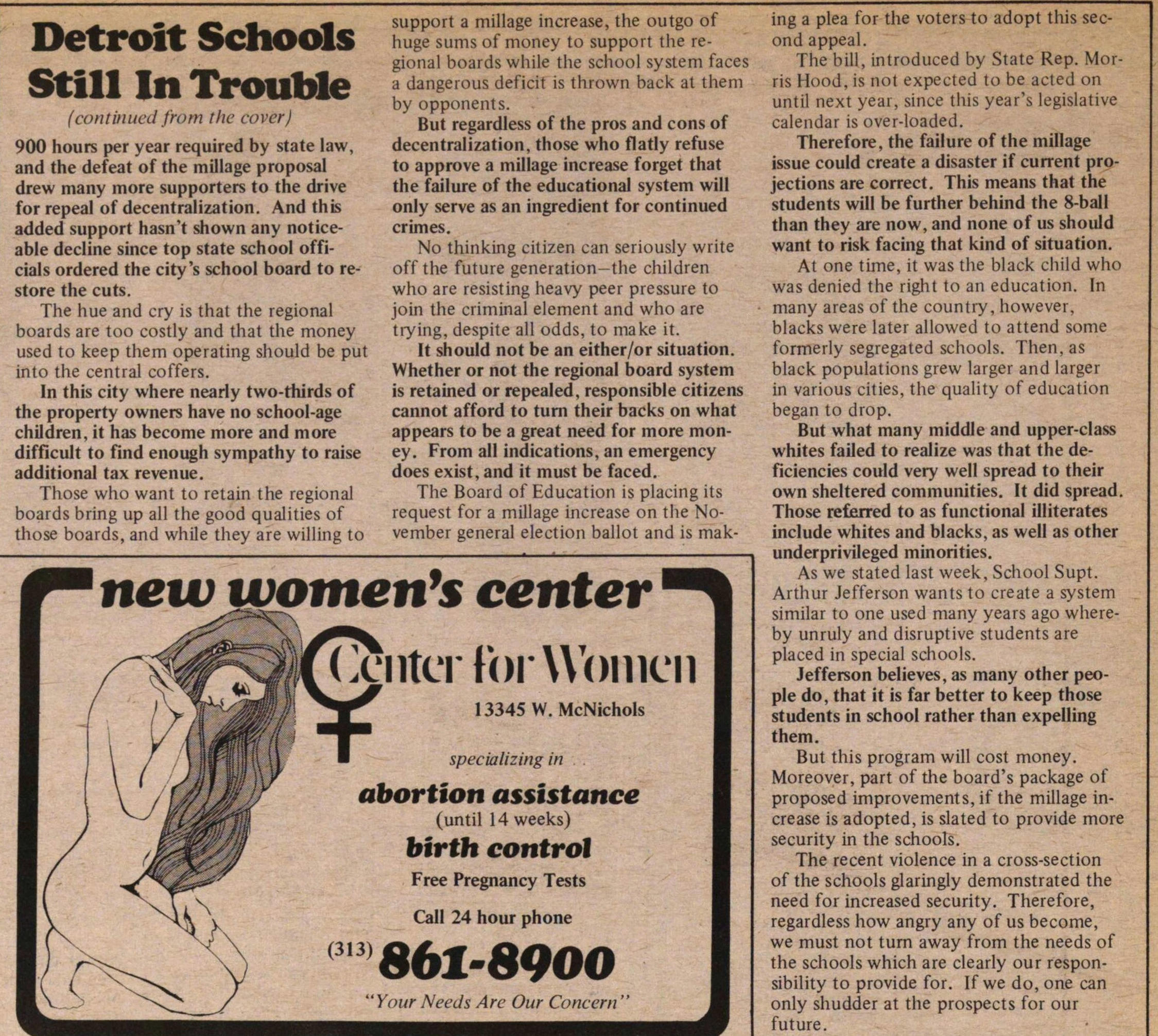 City tditor Detroit 's school system has faced one crisis after another for many years. But it was the decentralizationlawadoptedby the State Legislature in 1970 and the busing issue which touched off the serious conflicts which have brought the educational process to a near standstill today. The law, designed to provide community control over the schools, created eight regional school boards for that purpose. At the root of the problem, on the one hand, was the fact that the city 's school popuiation was rapidly becoming more and more black. Some white organizations and homeowner groups feared that community control would bring on a black 'takeover,' and they wanted no part of decentralization. They were also vehemently opposed to any form of busing, whicli they were sure would spread out into the suburbs and thus leave them with no place to run. On the other hand, blacks favored decentralization but became embroiled in a lot of bickering on how it was to be set up. This delayed its implementation. But blacks too were opposed to busing because they feit it would result in blacks being disenfranchised. The white groups conducted a successful recall of four central board members and blacksthinking the four were pushing the busing issue- sat back and allowed the recalls to take place. Now the vehicle through wlu'ch the black community was to achieve control of their schools (it has done so to some degree) is under attack, mainly because of the financial situation of Detroit's school system, or what is charged as mismánagement by some officials. Opponents describe the regional boards as "little bureaucracies." Some accuse them of ripping off the taxpayers. What they forget, however, is that some very good, sincere and diligent people ' sit on several of those boards, and despite thebiekering and in-fighting that goes on, needed progress has been made in some areas. The announced cutbacks in various school programs, cuts in class hours which would fall below the (continued on page 24) Detroit Schools Still In Trouble (contiiiued from the cover) 900 hours per year required by state law, and the defeat of the milla ge proposal drew many more supporters to the drive for repeal of decentralization. And this added support hasn't shown any noticeable decline since top state school officials ordered the city's school board to restore the cuts. The hue and cry is that the regional boards are too costly and that the money used to keep them operating should be put into the central coffers. In this city where nearly two-thirds of the property owners have no school-age children, it has become more and more difficult to find enough sympathy to raise additional tax reven ue. Those who want to retain the regional boards bring up all the good qualities of those boards, and while they are willing to support a millage increase, the outgo of huge sums of money to support the regional boards while the school system faces a dangerous deficit is thrown back at them by opponent s. But regardless of the pros and cons of decentralization, those who flatly refuse to approve a millage increase forget that the failure of the educational system will only serve as an ingrediënt for continued crimes. No thinking citizen can seriously write off the future generation-the children who are resisting heavy peer pressure to join the criminal element and who are trying, despite all odds, to make it. It should not be an eitheror situation. Whether or not the regional board system is retained or repealed, responsible citizens cannot afford to tum their backs on what appears to be a great need for more money. From all indications, an emergency does exist, and it must be faced. The Board of Education is placing its request for a millage increase on the November general election ballot and is ing a plea for the voters to adopt this second appeal. The bill, introduced by State Rep. Morris Hood, is not expected to be acted on until next yeai , since this year's legislative calendar is over-loaded. Therefore, the failure of the millage issue could créate a disaster if current projections are correct. This means that the students will be further behind the 8-ball than they are now, and none of us should want to risk facing that kind of situation. At one time, it was the black child who was denied the right to an education. In many areas of the country, however. blacks were later allowed to attend some formerly segregated schools. Then, as black populations grew larger and larger in various cities, the quality of education began to drop. Bul what many middle and upper-class whites failed to realize was that the deficiencies could very well spread to their own sheltered communities. It did spread. Those referred to as functional illiterates include whites and blacks, as well as other underprivileged minorities. As we stated last week. School Supt. Arthur Jefferson wants to créate a system similar to one used many years ago whereby unruly and disruptive students are placed in special schools. Jefferson believes, as many other people do, that it is far better to keep those students in school rather than expelling them. But this program will cost money. Moreover, part of the board's package of proposed improvements, if the millage increase is adopted, is slated to provide more security in the schools. The recent violence in a cross-section of the schools glaringly demonstrated the need for increased security. Therefore, regardless how angry any of us become, we must not turn away from the needs of the schools which are clearly our responsibility to provide for. If we do, one can only shudder at the prospects for our future.