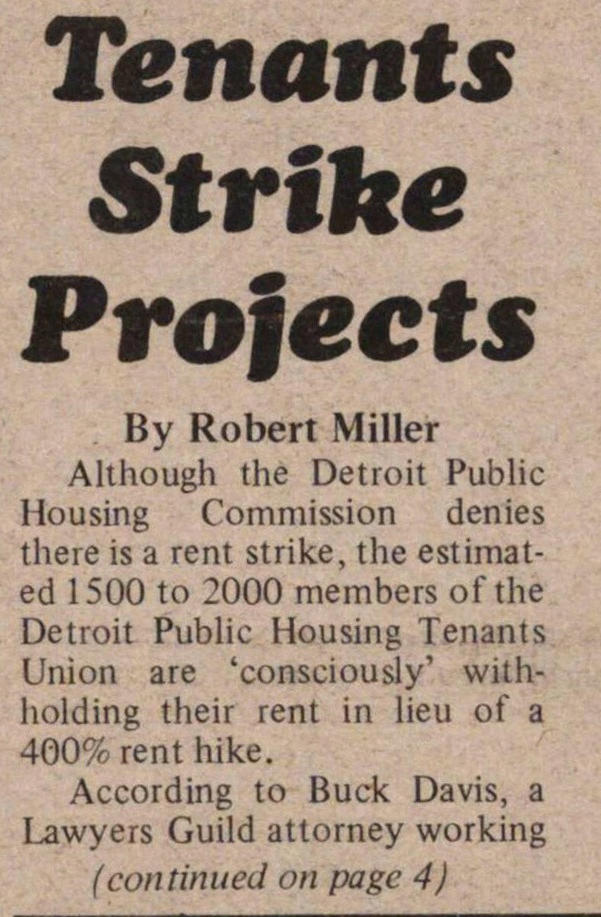 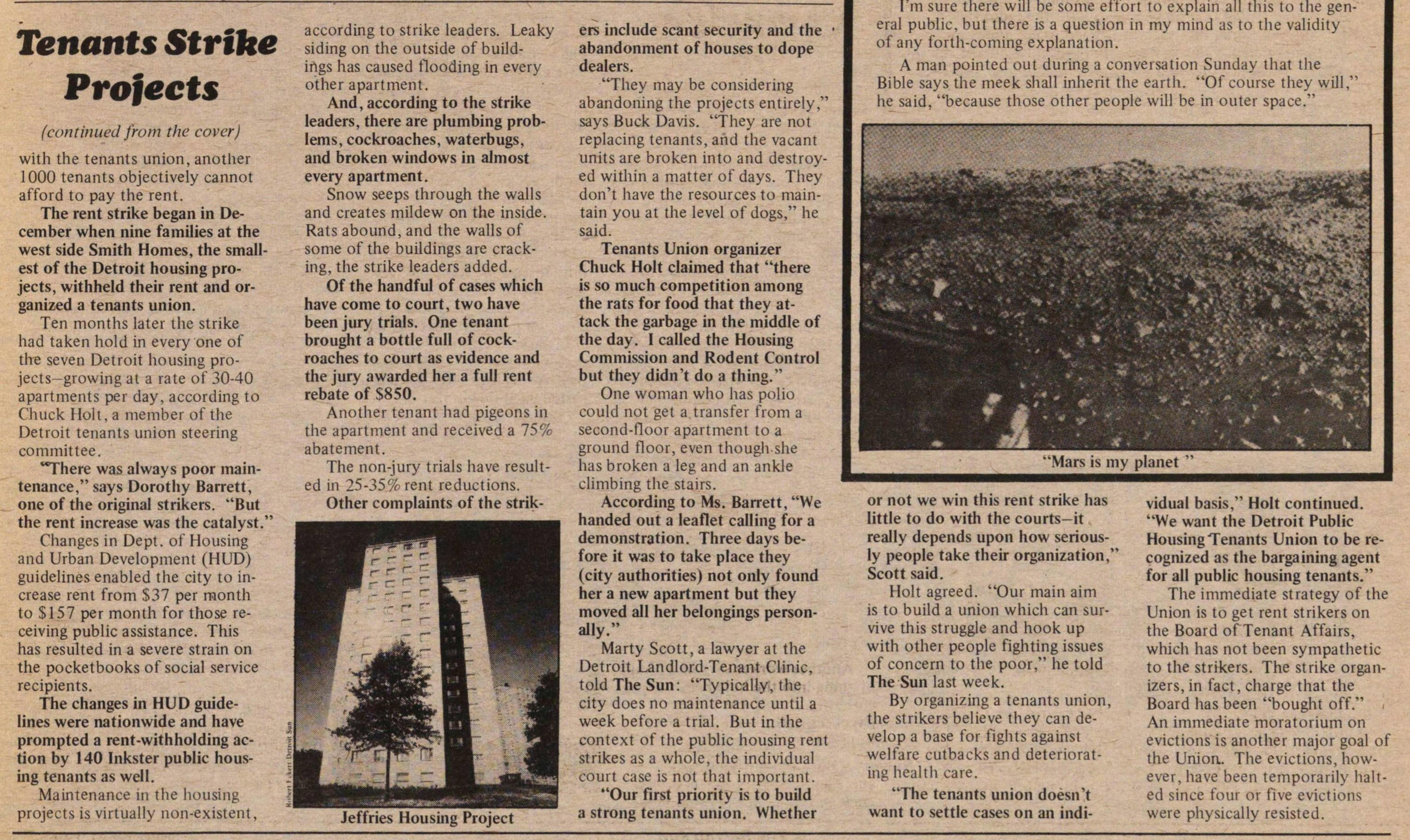 Although the Detroit Public Housing Commission denies there is a rent strike, the estimated 1 500 to 2000 members of the Detroit Public Housing Tenants Union are 'consciously' withholding their rent in lieu of a 400% rent hike. According to Buck Davis, a Lawyers Guild attorney working (continued on page 4) Tenant Strike Proiects (conttnued f rom the cover) with the tenants union, another 1000 tenants objectively cannot afford to pay the rent. The rent strike began in December when nine families at the west side Smith Homes, the smallest of the Detroit housing projects, withheld their rent and organized a tenants union. Ten months later the strike had taken hold in every one of the seven Detroit housing projects-growing at a rate of 30-40 apartments per day, according to Chuck Holt , a member of the Detroit tenants union steering committee. There was always poor maintenance," says Dorothy Barrett, one of the original strikers. "But the rent increase was the catalyst." Changes in Dept. of Housing and Urban Development (HUD) guidelines enabled the city to increase rent from $37 per rnonth to $157 per month for those receiving public assistance. This has resulted in a severe strain on the pocketbooks of social service recipients. The changes in HUD guidelines were nationwide and have prompted a rent-withholding action by 140 Inkster public housing tenantsas well. Maintenance in the housing projects is virtually non-existent, according to strike leaders. Leaky siding on the outside of buildings has caused flooding in every other apartmcnt. And, according to the strike leaders, there are plumbing probIems, cockroaches, waterbugs, and broken windows in almost every a part ment. Snow seeps through the walls and creates mildew on the inside. Rats abound, and the walls of some of the buildings are cracking, the strike leaders added. Of the handful of cases which have come to court, two have been jury trials. One tenant brought a bottle full of cockroaches to court as evidence and the jury awarded her a full rent rebate of S850. Another tenant had pigeons in the apartment and received a 75% abatement. The non-jury trials have resulted in 25-35% rent reductions. Other complaints of the ers include scant security and the abandonment of houses to dope dealers. "They may be considering abandoning the projects entirely," says Buck Davis. "They are not replacing tenants, and the vacant units are broken into and destroyed within a matter of days. They don't have the resources to maintain you at the level of dogs," he said. Tenants Union organizer Chuck Holt claimed that "there is so much competition among the rats for food that they attack the garbage in the middle of the day. I called the Housing Commission and Rodent Control but they didn't do a thing." One woman who has pulió could not get a transfer from a second-floor apartment to a ground floor, even though she has broken a leg and an ankle climbing the stairs. According to Ms. Barrett, "We handed out a leaflet calling for a demonstration. Three days before it was to take place they (city authorities) not only found her a new apartment but they moved all her belongings personally." Marty Scott, a lawyer at the Detroit Landlord-Tenant Clinic, toldTheSun: "Typically, the city does no maintenance until a week before a trial. But in the context of the public housing rent strikes as a whole, the individual court case is not that important. "Our first priority is to build a strong tenants union. Whether or not we win this rent strike has little to do with the courts- it really depends upon how seriously people take their organization," Scott said. Holt agreed. "Our main aim is to build a unión which can survive this struggle and hook up with other people fighting issues of concern to the poor," he told The Sun last week. By organizing a tenants unión, the strikers believe they can develop a base for fights against welfare cutbacks and deteriorating health care. "The tenants union doèsn't want to settle cases on an vidual basis," Holt continued. "We want the Detroit Public HousingTenants Union to be recognized as the bargaining agent for all public housing tenants." The immediate strategy of the Union is to get rent strikers on the Board of Tenant Affairs, wliich has not been sympathetic to the strikers. The strike organizers, in fact, charge that the Board has been "bought off." i An immediate moratorium on evictions is another major goal of the Unioa. The evictions, however, have been temporarily halted since four or five evictions were physically resisted.