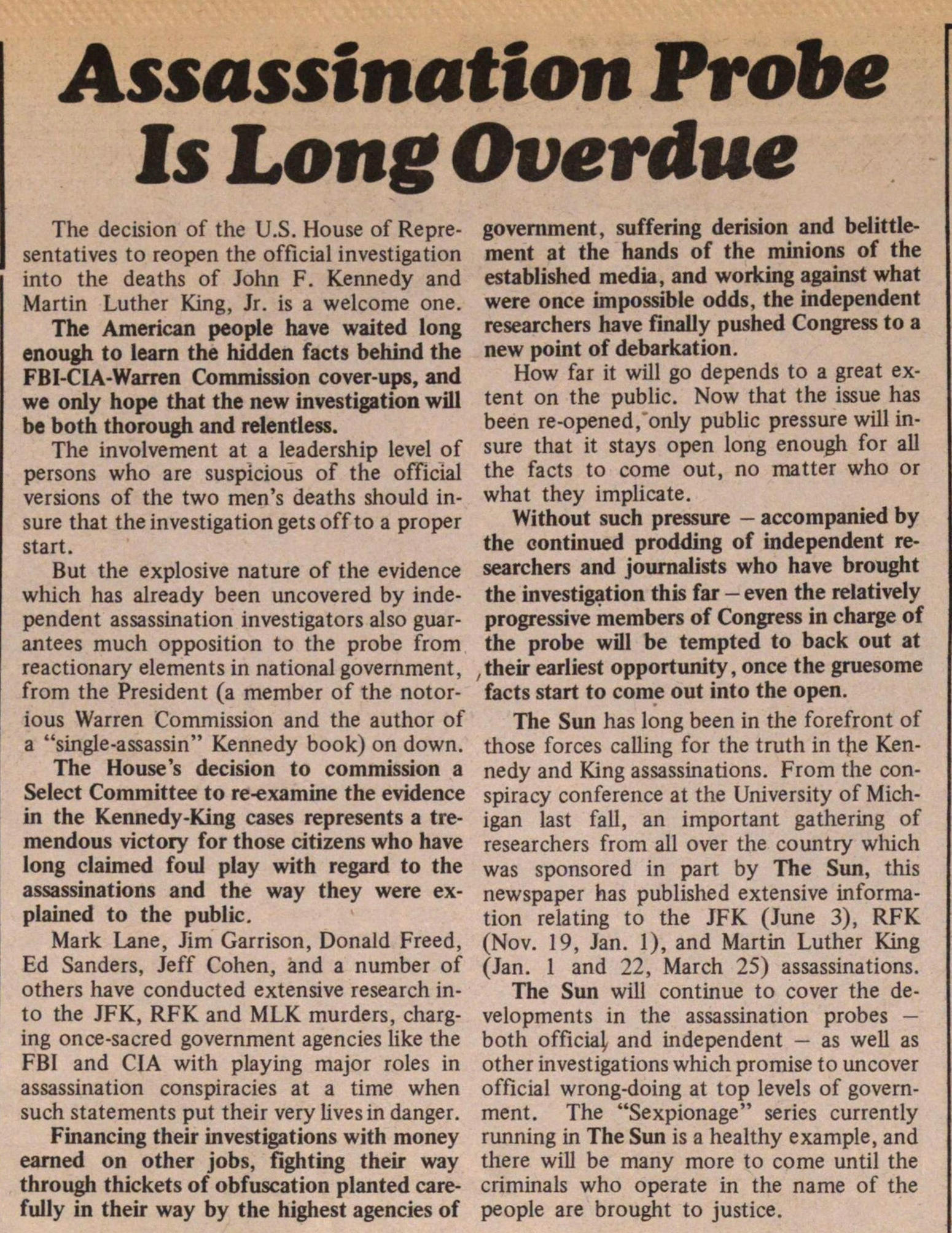 The decisión of the U.S. House of Representatives to reopen the official investigation into the deaths of John F. Kennedy and Martin Luther King, Jr. is a welcome one. The American people have waited long enough to learn the hidden facts behind the FBI-CIA-Warren Commission cover-ups, and we only hope that the new investigation will be both thorough and relentless. The involvement at a leadership level of persons who are suspicious of the official versions of the two men's deaths should insure that the investigation gets off to a proper start. But the explosive nature of the evidence which has already been uncovered by independent assassination investigators also guarantees much opposition to the probe from reactionary elements in national government, from the President (a member of the notorious Warren Commission and the author of a "single-assassin" Kennedy book) on down. The House 's decisión to commission a Select Committee to re-examine the evidence in the Kennedy-King cases represents a tiemendous victoiy for those citizens who have long claimed foul play with regard to the assassinations and the way they were explained to the public. Mark Lañe, Jim Garrison, Donald Freed, Ed Sanders, Jeff Cohén, and a number of others have conducted extensive research into the JFK, RFK and MLK murders, charging once-sacred government agencies like the FBI and CIA with playing major roles in assassination conspiracies at a time when such statements put their very livesin danger. Financing their investigations with money earned on other jobs, fighting their way through thickets of obfuscat ion planted carefully in their way by the highest agencies of government, suffering derísion and belittlement at the hands of the minions of the established media, and working against what were once mpossible odds, the independent researchere have finally pushed Congress to a new point of debarkation. How far it will go depends to a great extent on the public. Now that the issue has been re-opened,"only public pressure will insure that it stays open long enough for all the facts to come out, no matter who or what they implícate. Without such pressure - accompanied by the continued prodding of independent researchers and journalists who have brought the investigaron this far - even the relatively progressive members of Congress in charge of the probé will be tempted to back out at ,their earliest opportunity, once the gruesome facts start to come out into the open. The Sun has long been in the forefront of those forces calling for the truth in tjie Kennedy and King assassinations. From the conspiracy conference at the University of Michigan last fall, an important gathering of researchers from all over the country which was sponsored in part by The Sun, this newspaper has published extensive information relating to the JFK (June 3), RFK (Nov. 19, Jan. 1), and Martin Luther King (Jan. 1 and 22, March 25) assassinations. The Sun will continue to cover the developments in the assassination probes - both official, and independent - as well as other investigations which promise to uncover official wrong-doing at top levéis of government. The "Sexpionage" series currently running in The Sun is a healthy example, and there will be many more to come until the crimináis who opérate in the name of the people are brought to justice.