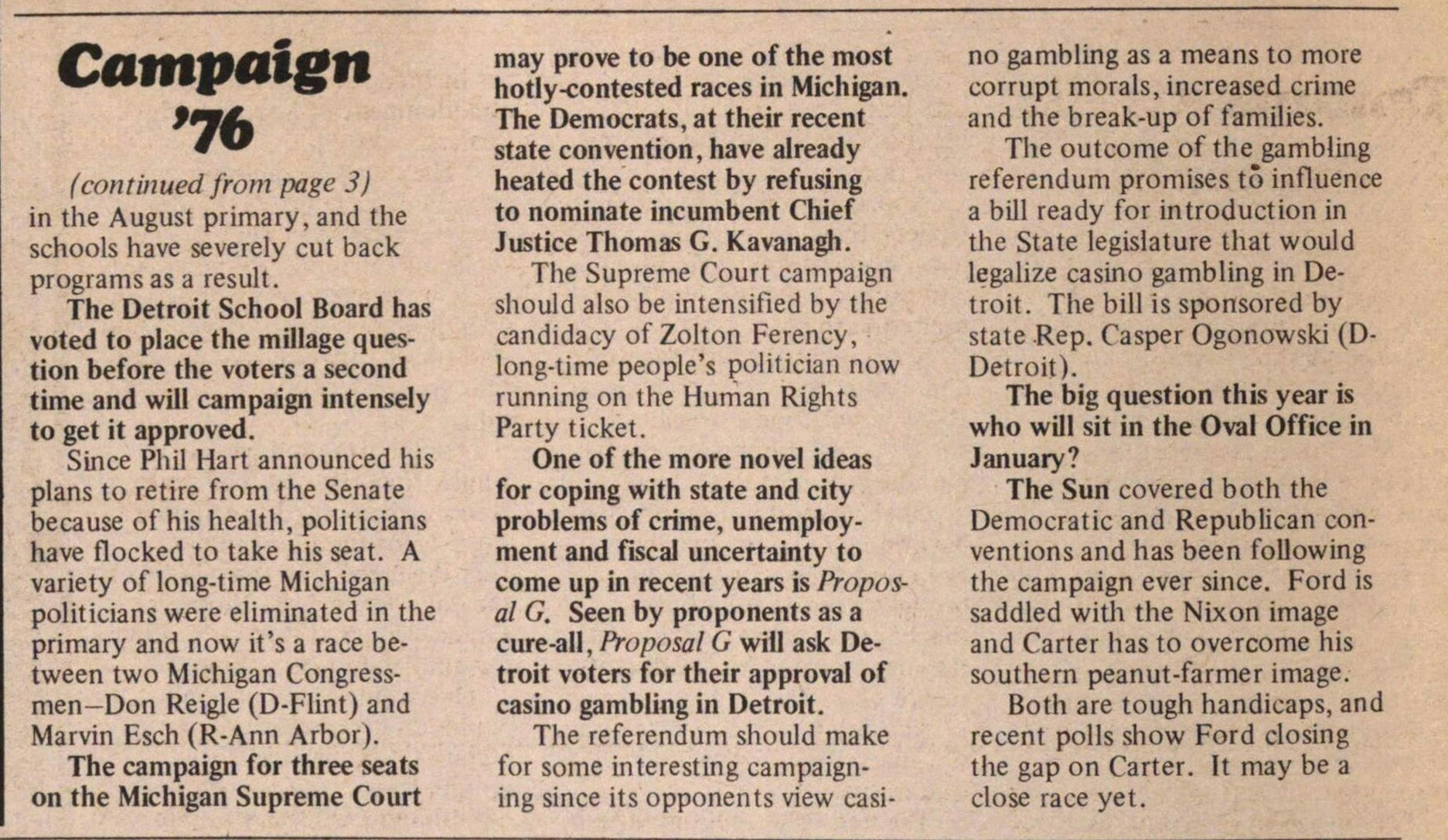 In the days and weeks prior to the November election, The Sun will be closely following the issues and politicians that make up Campaign '76. The Sun will endeavor to supply its readers with concise and accurate profïles both local and national issues facing voters this November. Among those issues to be covered will be the continuing plight of the Detroit School system, which has again placed the millage question on the ballot; the campaign for Philip Hart's U.S. Senate seat; the jockeying for State Supreme Court posts; the gambling referendum; and the intense campaign for the nation's high. est elected office. As The Sun has reponed, the Detroit school system is presently reeling from financial problems. The School Board and school administration have laid much of their hope on the passage of a 5-mill package. (continued on page 6) Campaign '76 (continued front page 3) in the August primary, and the schools have severely cut back programs as a result. The Detroit School Board has voted to place the mil lage question before the voters a second time and will campaign intensely to get it approved. Since Phil Hart announced his plans to retire from the Senate because of his health, politicians have flocked to take his seat. A variety of long-time Michigan politicians were eliminated in the primary and now it's a race between two Michigan Congressmen-Don Reigle (D-Flint) and Marvin Esch (R-Ann Arbor). The campaign for three seats on the Michigan Supreme Court may prove to be one of the most hotly-contested races in Michigan. The Democrats, at their recent state convention, have airead y heated the contest by refusing to nomínate incumbent Chief Justice Thomas G. Kavanagh. The Supreme Court campaign should also be intensified by the candidacy of Zolton Ferency, long-time people's politician now running on the Human Rights Party ticket. One of the more novel ideas for coping with state and city problems of crime, unemployment and fiscal uncertainty to come up in recent years is Proposal G. Seen by proponents as a cure-all , Proposal G will ask Detroit voters for their approval of casino gambling in Detroit. The referendum should make for some interesting campaigning since its opponents view no gambling as a means to more corrupt moráis, increased crime and the break-up of families. The outcome of the gambling referendum promises to influence a bilí ready for introduction in the State legislature that would legalize casino gambling in Detroit. The bilí is sponsored by state Rep. Casper Ogonowski (DDetroit). The big question this year is who will sit in the Oval Office in January? The Sun covered both the Democratie and Republican conventions and has been following the campaign ever since. Ford is saddled with the Nixon image and Carter has to overeóme his southern peanut-farmer image. Both are tough handicaps, and recent polis show Ford closing the gap on Carter. It may be a close race yet.