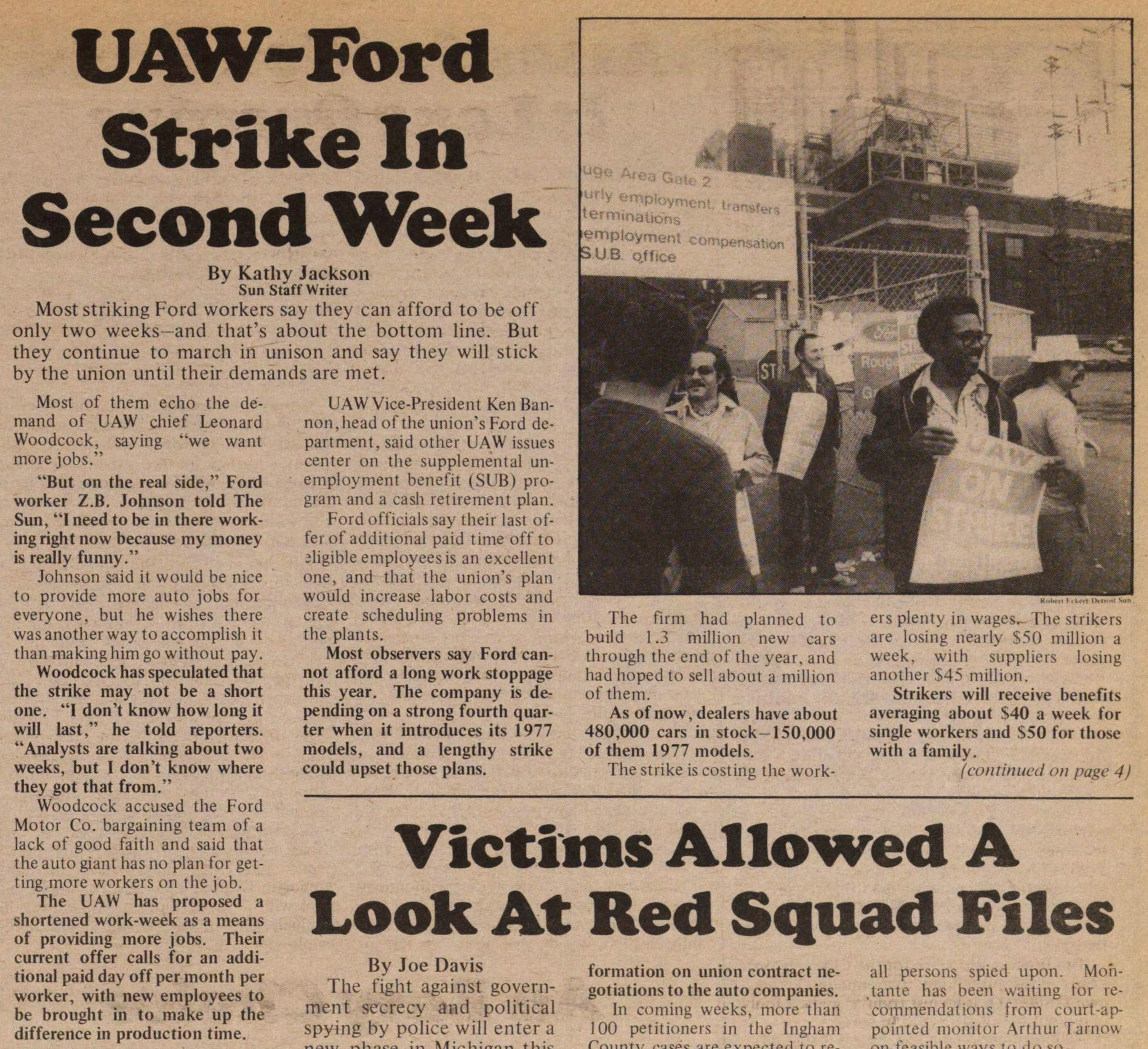 Sun Staff Writer Most striking Ford workers say they can afford to be off only two weeks- and that's about the bottom line. But they continue to march in unisón and say they will stick by the union until their demands are met. Most of them echo the deniand of UAW chief Leonard Woodcock, saying "'we want more jobs." "But on the real side," Ford worker Z.B. Johnson told The Sun, "I need to be in there workingright now because my money is really funny." Jolmson said it would be nice to provide more auto jobs for everyone, but he wishes there wasanotherway toaccomplish it than making him go without pay. Woodcock has speculated that the strike may not be a short one. "I don 't know how long it will last," he told reporters. "Analysts are talking about two weeks, but I don 't know where they got that from." Woodcock accused the Ford Motor Co. bargaining team of a lack of good faith and said that the auto giant has no plan for gett ing inore workers on the job. The UAW has proposed a shortened work-week as a means of providing more jobs. Their current offer calis for an additional paid day off per month per worker, with new employees to be brought in to make up the difference in production time. UAW Vice-President Ken Bannon.headofthe union'sFjord dcpartment, said other UAW issues center on the supptemental unemployment benefit (SUB) program and a cash retirement plan. Ford officials say their last offer of additional paid time off to ;ligible employees is an excellent one, and that the union's plan would increase labor costs and créate scheduling problems in the plants. Most observers say Ford cannot afford a long work stoppage this year. The company is depending on a strong fourth quarter when it introduces its 1977 models, and a lengthy strike could upset those plans. The fïrm had planned to build 1.3 millioii new cars through the end of the year, and had hoped to sell about a million of them. As of now, dealers have about 480,000 cars in 150,000 of them 1977 models. The strike is costing the ers plenty in wages, fhe strifcers are losing nearly $50 milion a week. with suppliers losing another $45 million. Strikers will receive benefits averaging about S40 a week for single workers and $50 for those with a family. (continued on page 4) UAW-Ford Strike In Second Week (continued from page 3) The current strike is the second against Ford in nine years, the last being in 1967. That walkout cost the workers $203 million in wages and Ford Motor Co. the production of some 600,000 cars and trucks. The present strike has idled 1 70,000 UAW members in 1 02 Ford facilities in 23 states. Of the workers idled, 85,000 are in Michigan. "Things would never get better if we didn't walk out," said Ford worker Bennett Sterling. "Sometimes you have to sacrifice in order to improve your condition." Corey Dentón, another Ford worker, said, "Pm willing to stay out if they come up with some good fringe benefits. Those fringes really help to increase my salary." All UAW members are not so enthusiastic about the strike. "I didn't want to see a strike," Leroy Blackman, 33, an assemblyline worker, told The Sun. "And I feel the union didn't keep us properly informed about bargaining issues." Another worker says he's afraid of going into the hole because he's currently living from paycheck to paycheck and the meager strike fund will not pay his bilis. A third striker, Thomas Bryant, said he doesn't see why Woodcock and some of the other labor bosses won 't take a pay cut too. "Woodcock máde the decisión," Bryant grumbled, "without thinking about the fact that 1 have five kids to feed. And now he's saying this strike may go on indefinitely." In contrast, another worker said that if the strike is successful, things might be better for his kids in the long run. As the strike enters its second week, the number of UAW locáis reaching individual agreements with their Ford units is climbing rapidly - a sign which many hope will encourage a speedy settlement to the strike.