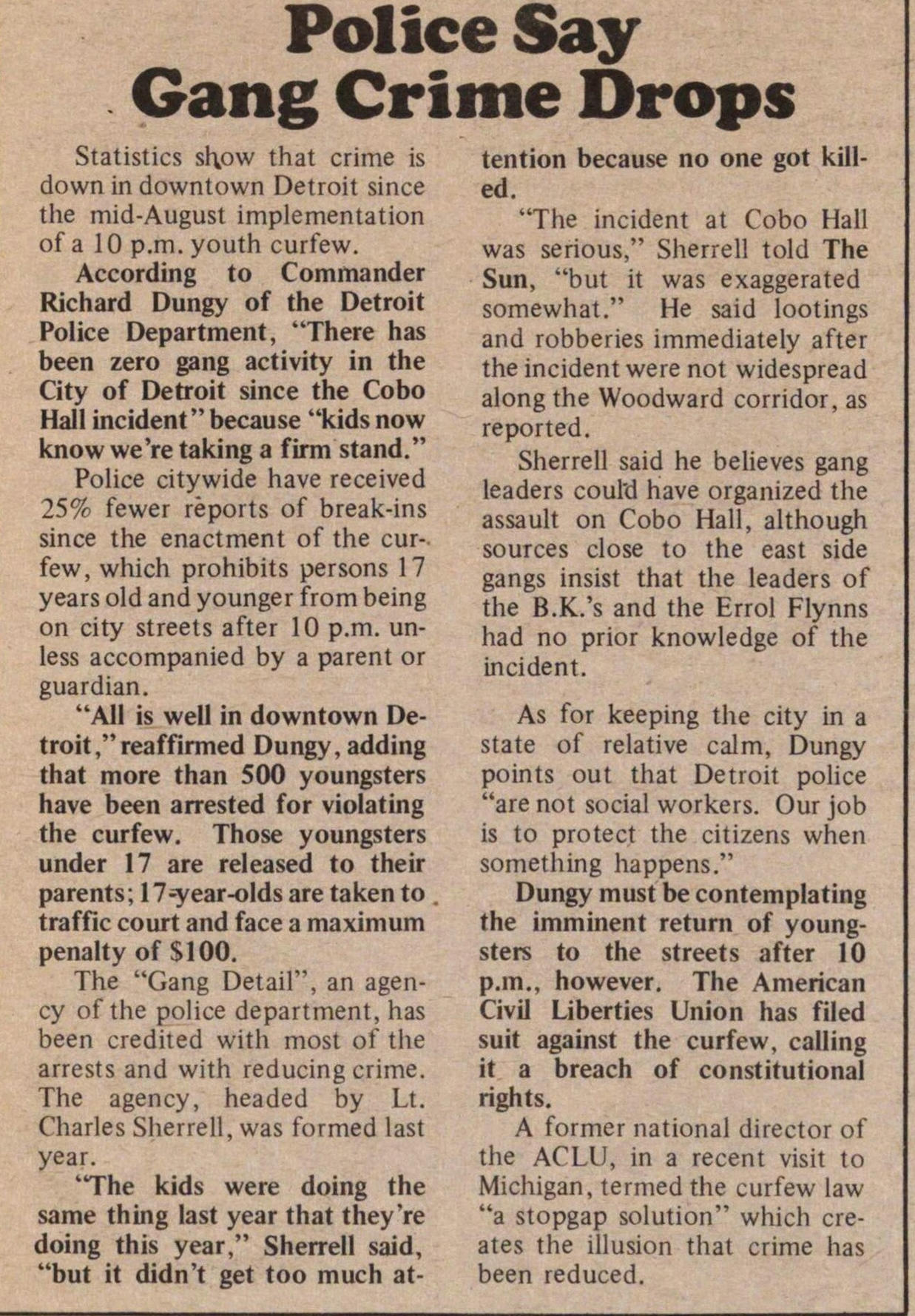 Statistics show that crime is down in downtown Detroit since the mid-August implementation of a 10 p.m. youth curfew.

According to Commander Richard Dungy of the Detroit Police Department, "There has been zero gang activity in the City of Detroit since the Cobo Hall incident " because "kids now know we're taking a firm stand."

Police citywide have received 25% fewer reports of break-ins since the enactment of the curfew, which prohibits persons 17 years old and younger from being on city streets after 10 p.m. unless accompanied by a parent or guardian.

"All is well in downtown Detroit ," reaffirmed Dungy, adding that more than 500 youngsters have been arrested for violating the curfew. Those youngsters under 17 are released to their parents; 17-year-olds are taken to traffic court and face a maximum penalty of $100.

The "Gang Detail", an agency of the police department, has been credited with most of the arrests and with reducing crime. The agency, headed by Lt. Charles Sherrell, was formed last year.

"The kids were doing the same thing last year that they're doing this year," Sherrell said, "but it didn't get too much attention because no one got killed.

"The incident at Cobo Hall was serious," Sherrell told The Sun, "but it was exaggerated somewhat." He said lootings and robberies immediately after the incident were not widespread along the Woodward corridor, as reported.

Sherrell said he believes gang leaders could have organized the assault on Cobo Hall, although sources close to the east side gangs insist that the leaders of the B.K.'s and the Errol Flynns had no prior knowledge of the incident.

As for keeping the city in a state of relative calm, Dungy points out that Detroit police "are not social workers. Our job is to protect the citizens when something happens."

Dungy must be contemplating the imminent return of youngsters to the streets after 10 p.m., however. The American Civil Liberties Union has filed suit against the curfew, calling it a breach of constitutional rights.

A former national director of the ACLU, in a recent visit to Michigan, termed the curfew law "a stopgap solution" which creates the illusion that crime has been reduced.