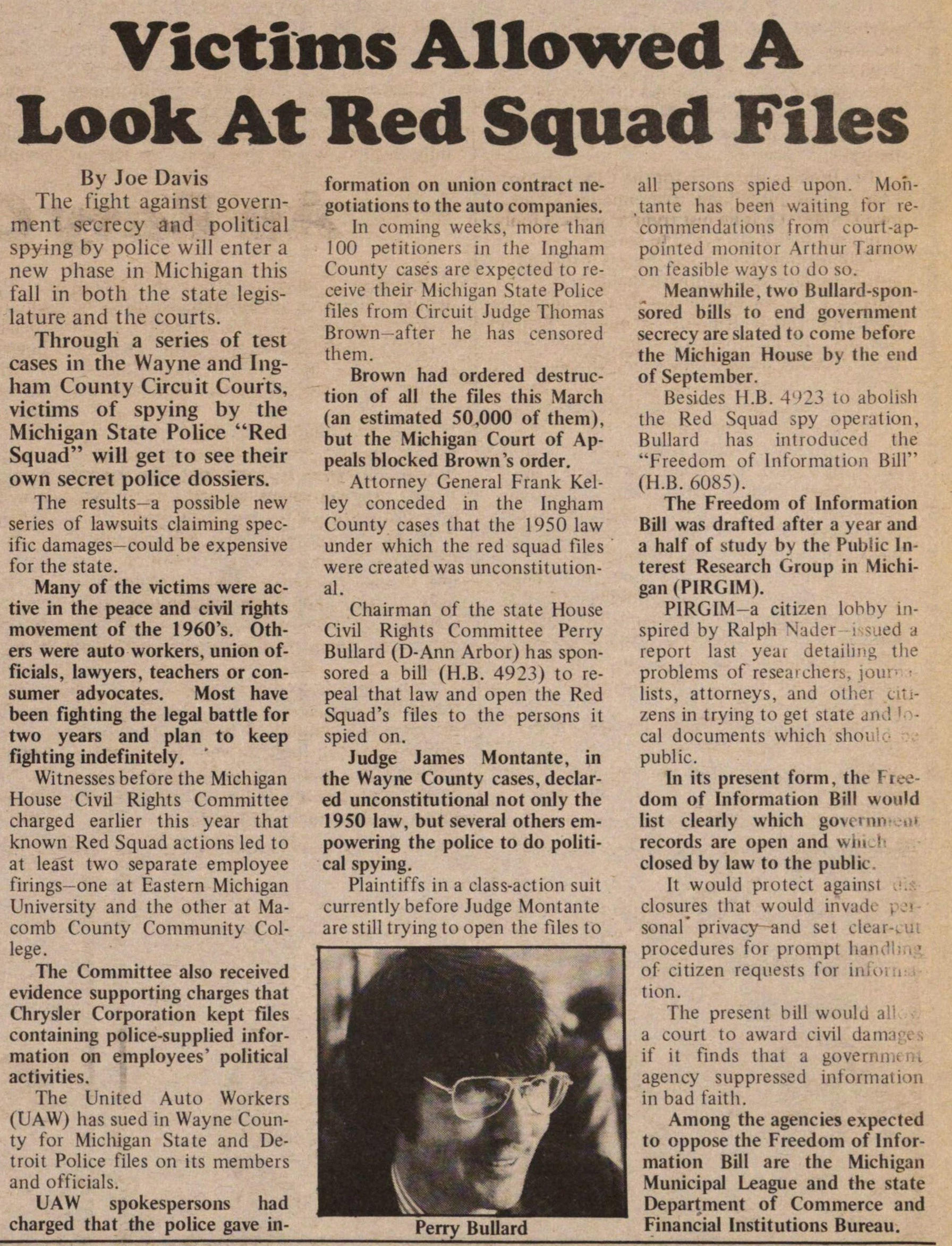 The fight against government sccrecy and political spying by pólice will enter a new phase in Michigan tliis fall in both the state legislature and the courts. Through a series of test cases in the Wayne and Ingham County Circuit Courts, victims of spying by the Michigan State Pólice "Red Squad" will get to see their own secret pólice dossiers. The results-a possible new series of lawsuits claiming specific damages-could be expensive for the state. Many of the victims were active in the peace and civil rights movement of the 1960's. Others were auto workers, union officials, lawyers, teachers or consumer advocates. Most have been fight ing the legal battle for two years and plan to keep fighting indefinitely. Witnesses before the Michigan House Civil Rights Committee charged earlier this year that known Red Squad actions led to at least two separate employee firings- one at Eastern Michigan University and the other at Macomb County Community College. The Committee also received evidence supporting charges that Chrysler Corporation kept files containing police-supplied information on employees' political activities. The United Auto Workers (UAW) has sued in Wayne County for Michigan State and Detroit Pólice files on its members and officials. UAW spokespersons had charged that the pólice gave formation on unión contract negotiations to the auto companies. In coming weeks, more ihan 100 petitioners in the Ingham County cases are expected to receive their Micliigan State Pólice files trom Circuit Judge Thomas Brown- after he has censored them. Brown had ordered destruction of all the files this March (an estimated 50,000 of them), but the Michigan Court of Appeals blocked Brown 's order. Attorney General Frank Kelley conceded in the Ingham County cases that the 1950 lavv under which the red squad files were created was unconstitutional. Chairman of the state House Civil Rights Committee Perry Bullard (D-Ann Arbor) has sponsored a bilí (H.B. 4923) to repeal that law and open the Red Squad's files to the persons it spied on. Judge James Montante, in the Wayne County cases, declared unconstitutional not only the 1950 law, but several others empowering the pólice to do political spying. Plaintiffs in a class-action suit currently before Judge Montante are still trying to open the files to all persons spied upon. Montante has been waiting t'or recbrnrrreridafions trom cóurt-appdinted monitor Arthur Harnow on fcasible ways to do so. Meanwhile, two Bullard-sponsored bilis to end govemment secrecy are slated to come before the Michigan House by the end of September. Besides H.B. 4923 to abolish the Red Squad spy operation, Bullard has introduced the "Freedom of Information Bill" (Il.B. 6085). The Freedom of Information BUI was drafted after a year and a half of study by the Public Interest Research Group in Michigan (PIRGIM). PIRGIM-a citizen lobby inspired by Ralph Nadet í sued a report last yeai detailing the problems of researchere, oui lists, attorneys, and ollier uüzens in trying to get state and cal documents vvhich shoi public. In its present form, the ! dom of Information Bill wotild list clearly which governnmai records are open and w . closed by law to the public. It would protect againsi closures that would invadí sonal" privacy and sel Jen procedures for prompt hal of citizen requests for inf tion. The present bill woulj all a court to award civil dam f it finds that a governn agency suppressed information in bad faith. Among the agencies expected to oppose the Freedom of Information Bill are the Michigan Municipal League and the state Department of Commerce and Financial Institutions Bureau.