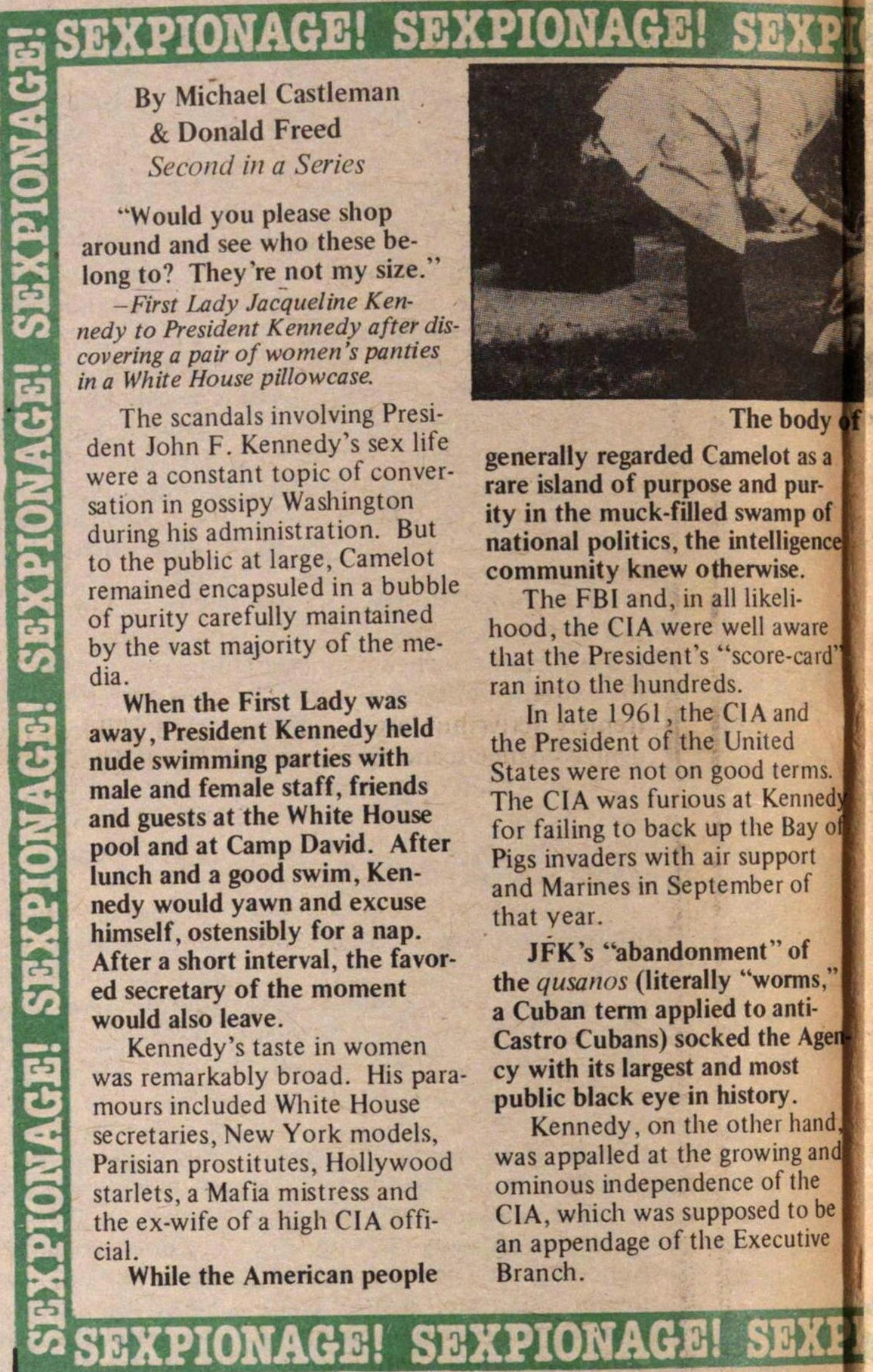 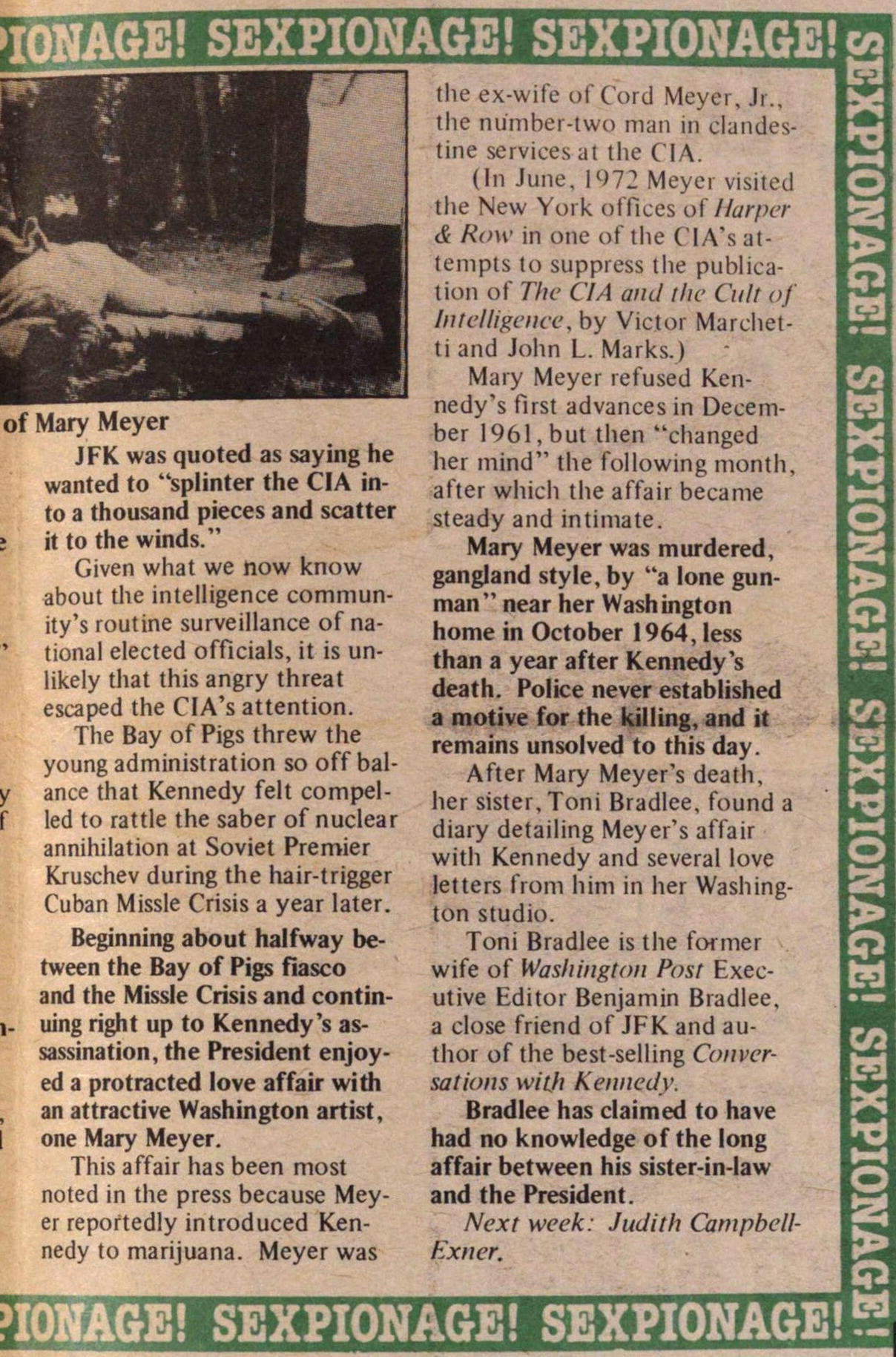 Second in a Series "Would you please shop ar on ml and see who these ■ long to? They're not my size." -First Lady Jacqueline Kennedy to President Kennedy after discovering a pair of women 's panties in a White House pillowcase. The scandals involving President John F. Kennedy 's sex life were a constant topic of conversation in gossipy Washington during his administration. But to the public at large, Camelot remained encapsuled in a bubble of purity carefully maintained by the vast majority of the media. When the First Lady was away, President Kennedy held nude swimming parties with male and female staff, friends and guests at the White House pool and at Camp David. After lunch and a good swim, Ken nedy would yawn and excuse himself , ostensibly for a nap. After a short interval, the favored secretary of the moment would also leave. Kennedy's taste in women was remarkably broad. His paramours included White House secretarles, New York models, Parisian prostitutes, Hollywood starlets, a Mafia mistress and the ex-wife of a high CIA official. While the American people generally regarded Camelot as a rare island of purpose and purity in the muck-filled swamp of national politics, the intelligence community knew otherwise. The FBI and, in all likelihood, the CIA were well aware that the President's "score-card' ran into the hundreds. In late 1961, the CIAand the President of the United States were not on good terms. ; The CIA was furious at Kenned; for failing to back up the Bay ol Pigs invaders with air support and Marines in September of that year. JFK's "abandonment"of the qusanns (literally "worms," a Cuban term applied to antiCastro Cubans) socked the Ager cy with its largest and most public black eye in history. Kennedy, on the other hand, was appalled at the growingand ominous independence of the CIA, which was supposed to be an appendage of the Executive Branch. I I i fa3M-JhNfcMdKAfr.HiWMrtaM.-Ml Eiss2isaaEia I IK was quoted as saying he wanted to "splinter the CIA into a thousand pieces and scatter jt to the winds." Given what we now know about the intelligence community's routine surveillance of national elected officials, it is unlikely that this angry threat escaped the CIA's attentton. The Bay of Pigs threw the young administration so off balance that Kennedy feit compelled to rattle the saber of nuclear annihilation at Soviet Premier Kruschev during the hair-trigger Cuban Missie Crisis a year later. Beginning about halfway between the Bay of Pigs fiasco and the Missie Crisis and contin. uing right up to Kennedy 's assassination, the President enjoyed a protracted love af fair with an attractive Washington artist, one Mary Meyer. This affair has been most noted in the press because Meyer reportedly introduced Kennedy to marijuana. Meyer was the ex-wife of Cord Meyer, Jr., the nümber-two man in clandestine services at the CIA. (In June. l)72 Meyer vlsilcd the New York offices of Harper A in pne of the ('IA's atlenipis to suppress the publication of The CIA and the Cidl of bttelligence, by Victor Marchetti and John L. Marks.) Mary Meyer refused Kennedy's first advancesin December 1961, but then "changed her mtnd" the following month, after which the affair becanie steady and intímate. Mary Meyer was murdered, gangland style, by "a lone gunman" near her Washington home in October 1964, less than a year after Kennedy 's death. Pólice never established a motive for the killing, and it remains unsolved to this day. After Mary Meyer's death, her sister. Toni Bradlee, found a diary detailing Meyer's affair with Kennedy and several love letters from him in her Washington studio. Toni Bradlee is the former wife of Washington Post Executive Editor Benjamin Bradlee, a close friend of JFK and author of the best-selling Convcrsations with Kennedy. Bradlee has claimed to have had no knowledge of the long affair between his sister-in-law and the President. Next week: Judith CampbellExner. n.uMdmilMJiiKMd3iH:W;iKng3i ra i I I J (O l f M :W1 M 'J (t) O f ;T0 H ;# (O O f ;T Hl of Mary Meyer