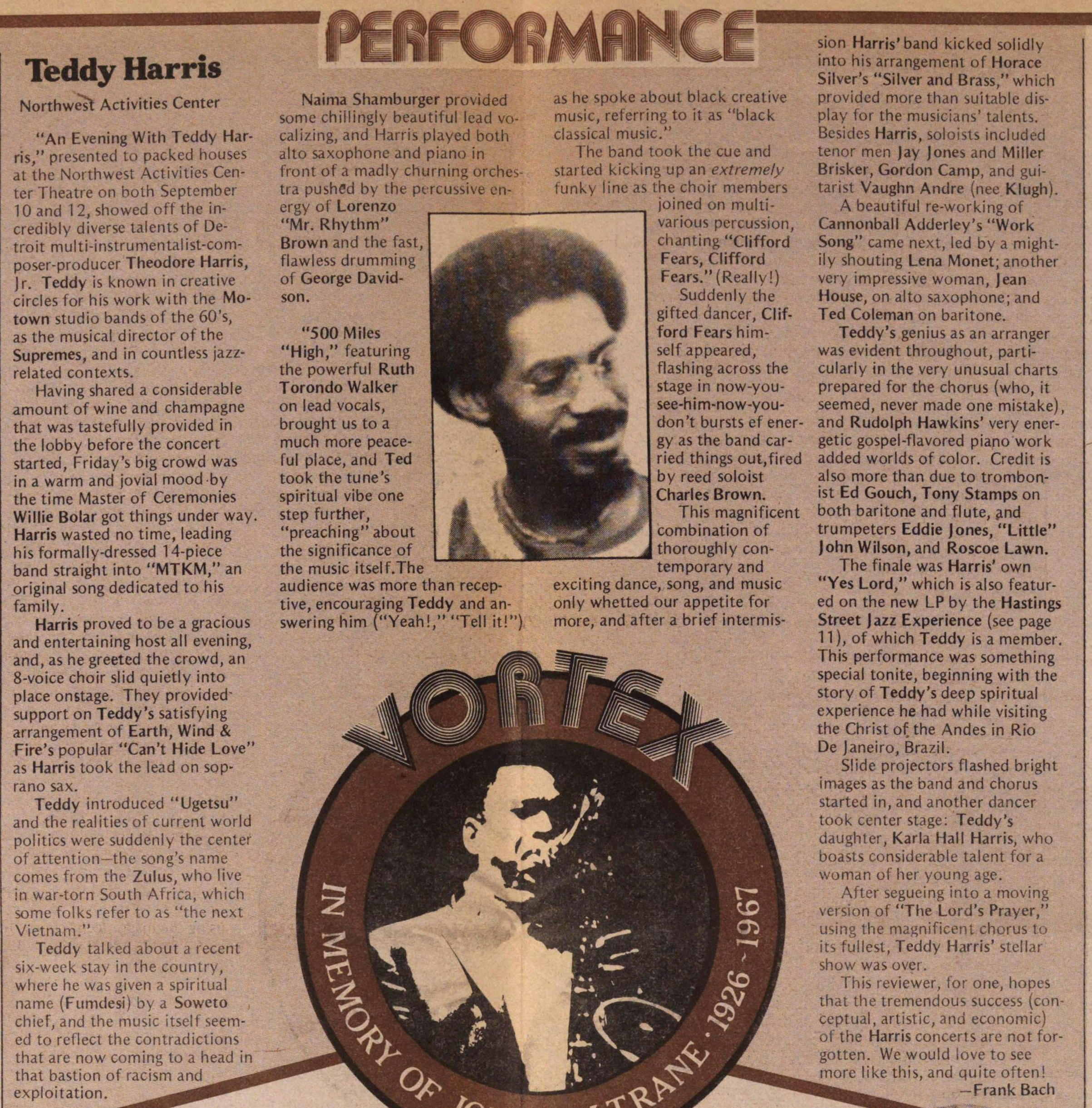 "An Evening With Teddy Harris," presented to packed houses at the Northwest Activities Center Theatre on both September 10 and 1 2, showed off the ncredibly diverse talents of Detroit multi-instrumentalist-composer-producer Theodore Harris, Jr. Teddy is known in creative circles for his work with the Motown studio bands of the 60's, as the musical director of the Supremes, and in countless jazzrelated contexts. Having shared a considerable amount of wine and champagne that was tastefully provided n the lobby before the concert started, Friday's big crowd was in a warm and jovial mood-by the time Master of Ceremonies Willie Bolar got things under way. Harris wasted no time, leading his formally-dressed 14-piece band straight into "MTKM," an original songdedicated to his family. Harris proved to be a gracious and entertaining host all evening, and, as he greeted the crowd, an 8-voice choir slid quietly into place onstage. They providedsupport on Teddy's satisfying arrangement of Earth, Wind & Fire's popular "Can't Hide Love" as Harris took the lead on soprano sax. Teddy introduced "Ugetsu" and the realities of current world politics were suddenly the center of attention- the song's name comes from the Zulus, who live in war-torn South África, which some folks refer to as "the next Vietnam." Teddy talked about a recent six-week stay in the country, where he was given a spiritual name (Fumdesi) by a Soweto chief, and the music tself seemed to reflect the contradiclions that are now coming to a head in that bastion of racism andí exploitation. Naima Shamburger provided some chillingly beautiful lead vocalizing, and Harris played both alto saxophone and piano n front of a madly chuming orchev tra pushed by the pircussive ergy of Lorenzo "Mr. Rhythm" Brown and the fast, flawless drumming I of George Davidson. "500 Miles "High," featuring the powerful Ruth Torondo Walker on lead vocals, brought us to a much more peaceful place, and Ted took the tune 's spiritual vibe one step further, "preaching"about the significance of the music itself.The audience was more than receptive, encouraging Teddy and answering him ("Yeah!," "Teil t!") as he spoke about black creative music, referring to it as "black classical music." The band took the cue and started kicking up an extremely funky line as the choir members joined on multivarious percussion, chanting "Clifford Fears, Clifford Fears."(Really!) Suddenly the gifted dancer, Clifford Fears himself appeared, flashingacross the stage in now-yousee-him-now-you- don't bursts ef energy as the band carried things out.fired by reed soloist Charles Brown. This magnificent combination of thoroughly contemporary and exciting dance, song, and music only whetted our appetite for more, and after a brief sion Harris'band kicked solidly nto his arrangement of Horace Silver's "Silver and Brass," which provided more than suitable display for the musicians' talcnts. Besidcs Harris, soloists included tenor men Jay Jones and Miller Brisker, Gordon Camp, and gutarist Vaughn Andre (nee Klugh). A beautiful re-workng of Cannonball Adderley's "Work Song" carne next, led by a mightly shouting Lena Monet;another very impressive woman, jean House, on alto saxophone; and Ted Coleman on baritone. Teddy's genius as an arranger was evident throughout, particularly in the very unusual charts prepared for the chorus (who, it seemed, never made one mistake), and Rudolph Hawkins' very energetic gospel-flavored piano work added worlds of color. Credit is also more than due to trombonist Ed Gouch, Tony Stamps on both baritone and flute, and trumpeters Eddie Jones, "Little" John Wlson,and Roscoe Lawn. The finale was Harris' own "Yes Lord," which is also featured on the new LP by the Hastings Street Jazz Experience (see page 1 1 ), of which Teddy s a member. This performance was something special tonite, beginning with the story of Teddy's deep spiritual experience he had while visiting the Christ of the Andes in Rio De Janeiro, Brazil. Slide projectors flashed bright images as the band and chorus started in, and another dancer took center stage: Teddy's daughter, Karla Hall Harris, who boasts considerable talent for a woman of her young age. After segueing into a moving version of "The Lord's Prayer," uiing the magnificent chorus to its fullest, Teddy Harris' stcllar show was over. This reviewer, for one, hopes that the tremendous success (conceptual, artistic, and economie) of the Harris concerts are not forgotten. We would love to see more like this, and quite of ten!