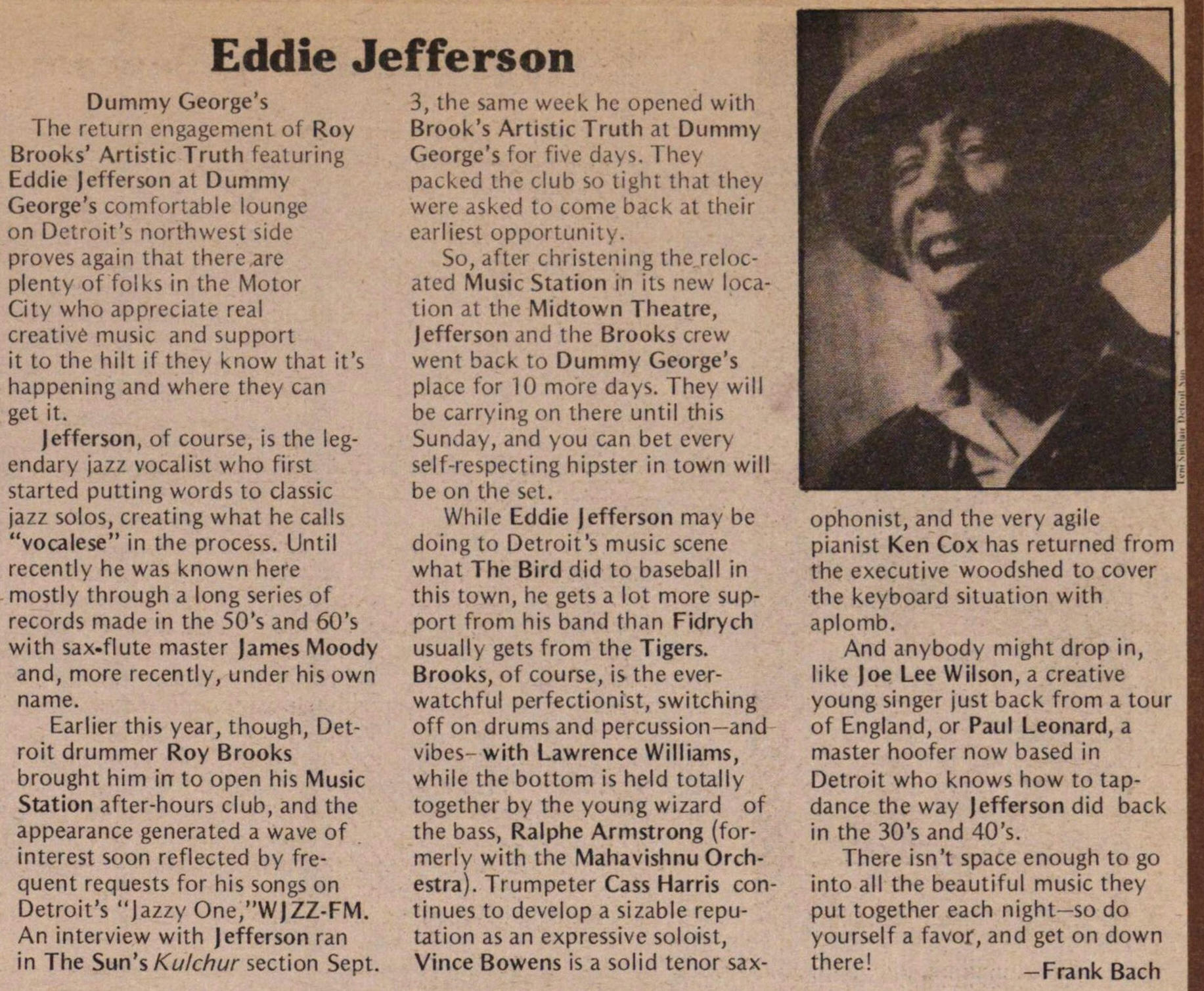 Dummy George's The return engagement of Roy Brooks' Artistic Truth featuring Eddie Jefferson at Dummy George's comfortable lounge on Detroit's northwest side proves again that there.are plenty of folks n the Motor City who appreciate real creativê music and support it to the hilt f they know that it's happening and where they can get it. Jefferson, of course, is the legendary jazz vocalist who fitst started putting words to classic jazz solos, creating what he calis "vocalese" in the process. Until recently he was known here mostly through a long series of records made in the 50's and 60's with sax-flute master James Moody and, more recently, under his own name. Earlier this year, though, Detroit drummer Roy Brooks brought him rr to open his Music Station after-hours club, and the appearance generated a wave of interest soon reflected by frequent requests for his songs on Detroifs "Jazzy One,"WJZZ-FM. An interview with Jefferson ran in The Sun'sKulchur section Sept. 3, the same week he opened with Brook's Artistic Truth at Dummy George's for five days. They packed the club so tight that they were asked to come back at their earliest opportunity. So, after christen ing the rclocated Music Station n its new location at the Midtown Theatre, Jefferson and the Brooks crew went back to Dummy George's place for 10 more days. They will be carryingon there until this Sunday, and you can bet cvery self-respecting hipster in town will be on the set. While Eddie jefferson may be doing to Detroit 's music scène what The Bird did to baseball n this town, he gets a lot more support from his band than Fidrych usually gets from the Tigers. Brooks, of course, is the everwatchful perfectionist, switching off on drums and percussion- and with Lawrence Williams, while the bottom is held totally together by the young wizard of the bass, Ralphe Armstrong (formerly with the Mahavishnu Orchestra). Trumpeter Cass Harris continúes to develop a sizable reputation as an expressive soloist, Vince Bowens is a solid tenor ophonist, and the very agüe pianist Ken Cox has returned from the executive woodshed to cover the keyboard situation with aplomb. And anybody might drop in, like Joe Lee Wilson, a creative young singer ust back from a tour of England, or Paul Leonard, a master hoofer now based in Detroit who knows how to tapdance the way Jefferson did back in the 30's and 40's. There isn't space enough to go into all the beautiful music they put together each night- so do yourself a favor, and get on down there!